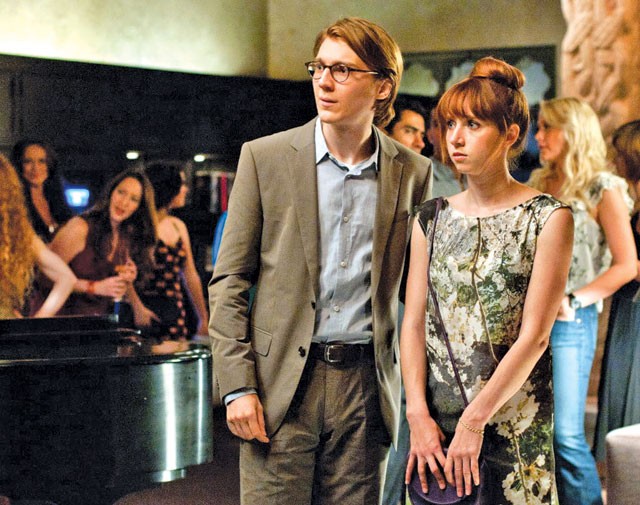 It only took the husband-and-wife team behind Little Miss Sunshine six years to follow up that hit film with this, a project starring and produced by another off-screen couple about a writer similarly tasked with following up his own hit novel several years after the fact.

That's just the tip of the iceberg when it comes to the nimbly meta Ruby Sparks, in which Calvin (Paul Dano) strives to pen his second novel a decade after breaking out in the literary world at the ripe age of 19. He has a comfortable living now, but not much of a life – he's still struggling to recover from the shadow of that success and the end of a five-year relationship. After Calvin's therapist (Elliott Gould) encourages him to go ahead and write about the kind of girl that he imagines could take a liking to his fickle terrier, the author goes on a much-needed tear, describing redheaded Ruby (Zoe Kazan) at great length.

Calvin is smitten with his own creation, and without warning, there she is, suddenly manifest in his home, smitten right back and utterly oblivious as to her origins on the page. What's more is Calvin's discovery, at the urging of his married brother, Harry (Chris Messina), that he can alter Ruby's behavior with a mere matter of keystrokes. Initially, Calvin swears off his typewriter (a loud, forceful relic of the past) in order to enjoy Ruby in all her real glory, but soon enough, the temptation to make her more ideal takes over, and this Pygmalion update grows even funnier, as Ruby unwittingly takes his every adjustment to heart, before confronting the fundamental flaws that have driven Calvin to repeatedly fix his partners rather than himself.

Jonathan Dayton and Valerie Faris have taken a matter-of-fact directorial tack to the magic realism of Kazan's own screenplay, a romantic fable infused with a tinge of cautionary criticism in the wake of recent rom-coms centered around the now-notorious Manic Pixie Dream Girl figure (see: Garden State, (500) Days of Summer – Fox Searchlight has pretty much cornered the market on these flicks) and an unlikely sincerity springing forth from beneath its flighty concept.

There's a rare, welcome physical punctuation to Dano's lanky frame as he contends with these unforeseen circumstances before revealing his more typically sullen persona. As interesting as it is to see him play God both romantically and creatively, Kazan proves fascinatingly game in the dual roles of creator and creation, assessing with her screenplay the weaknesses that drive men to pursue an elusive romantic paradigm while crafting for herself a role of some considerable range. She sells the fantasy without sacrificing the feelings.

The neurotic premise invites comparison to some prime Woody Allen features (The Purple Rose of Cairo, anyone?); the ending echoes Charlie Kaufman's stronger works without ever quite reaching his dizzying heights; and supporting players like Annette Bening, Antonio Banderas, Steve Coogan, and Alia Shawkat generally find themselves relegated to the sidelines. Nonetheless, Ruby Sparks finds a disarming approach to its emotional truths, and it bodes well for Dano and Kazan's creative collaborations to come – assuming that they, too, aren't a decade in the making.