What's old is new again in Lake Ivanhoe. I refer, however obliquely, to George Russell, who in the late 1880s settled in Ivanhoe Village, developed a pineapple farm along the shores of Lake Ivanhoe and then, a few years later, built Russell's Point, an amusement park, on these very lands. It's the same George Russell whose name now graces the marquee of the shiny new Russell's on Lake Ivanhoe, a shore-hugging restaurant touting the pineapple and offering more than a few amusements (of the gastronomic sort). It's arguably the finest restaurant in all of 32804 — not since the days of K Restaurant has there been an eatery in this ZIP code as cheffy and as noteworthy as Russell's, so all the doubters, skeptics and jinx-predictors can rest easy.

Owners Kevin O'Donnell and Phillipe Villain of VO Hospitality, the restaurant group behind the Porch, Back Porch, Local Butcher & Market and Big Fin Seafood Kitchen, invested heavily in redesigning the building that once housed Mesa 21 and Gargi's Lakeside as well as honing, um, Russell's brand? (Sorry.)

There's a pineapple painted on the ceiling above the bar that makes the historical tie-in pretty clear, but the most notable difference is how they enclosed the outdoor patio (a feature the space's predecessors used as a lure) to expand the dining room. The tables next to the windows opening out to the lake are the most coveted, and it's where we sat one evening, sipping — what else? — pineapple old-fashioneds ($12) while watching an interstate sunset.

It's all wonderfully picturesque, and the recent installation of acoustic panels should certainly reduce the mood-shattering clatter and din.

The panels, however, won't temper the enthusiastic moans of approval over chef Emmanuel Clement's creations, creations like the roasted beet and burrata "Napoleon" ($14) that had me whipping out my phone the moment it was set before us. A snap or two later we were forking into the stratified starter, swirling the red and golden beets in the basil and pine nut vinaigrette for a proper acid wash.

The season called for an order of stone crab claws ($10 each), one of the daily specials offered, but the dish that blew us away was the "royale with cheese" ($18), a burger I'd have to put right up there with the very best served in this burger-crazed town. The menu teases it as their "soon to be famous burger" and, yes, the boast is valid. It's served with a stack of very worthy house frites.

Clement, BTW, is no flash-in-the-pan chef. The man brings some serious cred to Russell's, having cooked at Le Meridien hotels from Cairo to Abu Dhabi to New York City before working as a corporate chef for Disneyland Paris and Planet Hollywood. He owned a couple of brasseries in Paris, then opened the well-received La Bodeguita del Centro in Mallorca, Spain, which he ran for 10 years.

So, it's no surprise his pan-seared duck confit ($36) is superbly crisped on the outside and pliant as can be on the inside. Even he'd admit that anything less would be a travesty. We got it with a side of broccolini and cheesy aligot potatoes, which were far too grainy to enjoy. Same goes for the undercooked basmati rice that we paired with local barrelfish ($28), another daily special and another pan-seared wonder. A seasoning of ginger, cumin and a hint of curry powder was bold enough without being the least bit heavy-handed and the seasonal baby veg helped offset the rice fail. 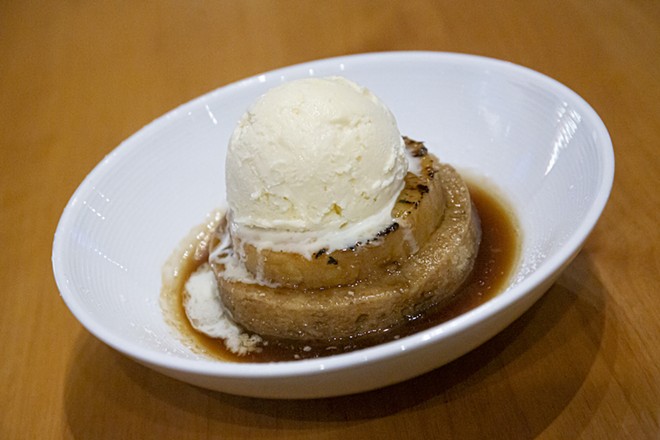 We ended, naturally, with the signature pineapple Foster ($9) — caramelized banana bread and a charred pineapple ring topped with vanilla ice cream and pooled in whiskey caramel sauce. Good? Well, let's just say we quite enjoyed the fruit of their labor.