Sandwich Bar is a choice destination, any way you slice it

As diners curb spending, chefs get creative with sandwiches 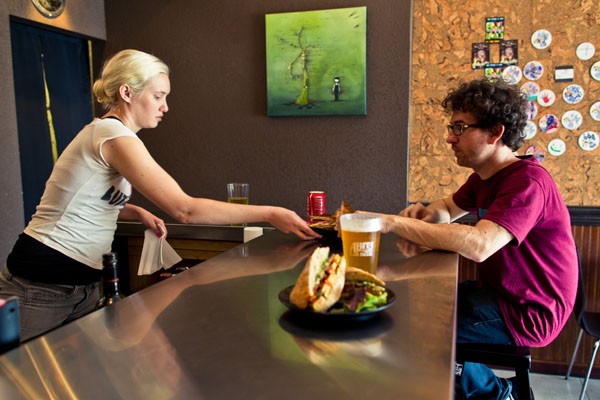 Long relegated to the lowly depths of lunchboxes and Ziplocs, the sandwich has risen from the depths of noontime receptacles to be dressed, primped and paraded onto restaurant tables, be they finest teak, outdoors wrought iron or trendy formica. For the sandwich, the recession has been the greatest thing since sliced bread - as diners curb discretionary spending, restaurateurs have turned to them for their bread and butter. Case in point: Matthew Harris. The Sandwich Bar owner drew inspiration from a friend's successful sandwichery out in California and brought the concept, along with a few of those Golden State sandwich recipes, to Orlando. The result is a joint that claims it's "where vegan, herbivore and carnivore can dine together and not eat each other," and given the size of the space, that's no small feat. Sandwich Bar is bigger than a bread box, but with just four tables and a counter with stools, the place is tight, to say the least. But it has a pleasant, inviting air to it, and I'm not just talking about the aroma.

Our server, full of mirth and glee, talked our ears off (much to our amusement) and, as a former vegan, was also full of opinions on what to sample from the menu. Our tack was to try one item from each section - "vegan," "herbivore" and "carnivore" - but we couldn't resist starting with a bowl of jalapeño hummus ($5) and vegan guacamole ($6). Sadly, the former didn't have the bite we expected; it just fell a bit flat. The guacamole had a smooth texture and a sweet-and-spicy kick, thanks to the sriracha nectar, a blend of rooster hot sauce and  agave nectar.

That gratifying concoction was also served alongside the special "Crooked Bayou chicken sandwich" ($7.50), named for Harris' girlfriend, who once ran the NOLA-themed bar and restaurant. Her Crooked Bayou wing sauce laced an Olde Hearth Bread Company roll stuffed with buffalo-spiced chicken breast, goat cheese, lettuce and tomato. It's a wonderfully simple sandwich comprising top-notch ingredients, and that's the approach taken with all the sandwiches here. Even the French bread-based "pilgrim" ($6.50), a seemingly boring mélange of Boar's Head turkey, Dijonaise, pepper jack, tomato, red onion and greens, was brought to life by the quality of the fillings. Herbivores will appreciate pigging out on the Morningstar soy bacon layered with strawberries and field greens in the "sweet li'l piggy" ($7.50), served on multigrain bread spread with a sweet Vidalia onion relish and vegan mayo. We had our eyes on the spicy tempeh tacos ($6), but they were all out of the lean protein (which they procure from the respected-in-vegan-circles Tempeh Shop in Gainesvillle). So we opted to take a bite out of some butt instead - the "healthy butt" ($6), to be precise. The vegan PB&J is about the closest thing to dessert on the menu, with house-made peanut butter sweetened with agave nectar, bananas, strawberries and granola. We couldn't get enough of the sweetened stack of gummy goodness.

There are a few beers available by the bottle and on tap (ranging from craft brews to more mass-market brands), though given the size, it's not really an ideal place to hang out for a significant period of time. But for a quality nosh in the Milk District, the Sandwich Bar is a choice destination, any way you slice it.