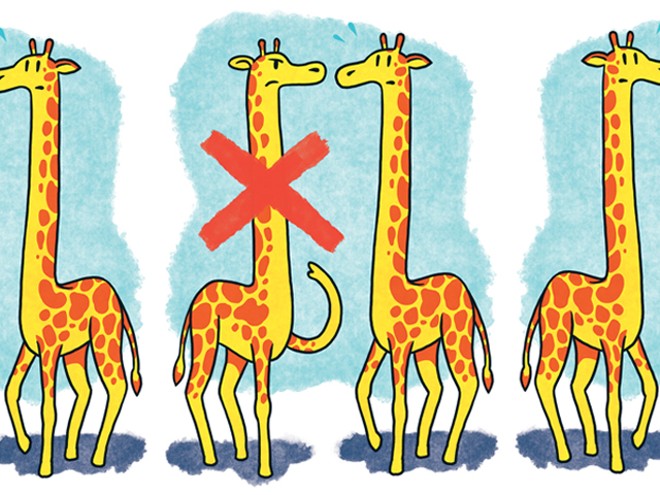 I'm a 29-year-old straight woman in Pennsylvania. My question is to do with choking and consent. I've had two experiences in the past six months or so where someone has tried to choke me without my consent. The first time this happened, I coughed immediately but he tried multiple times during sex. I was caught so off-guard that I didn't say anything until the next morning. I told him I wasn't okay with that and that it was too much. The second time, I shook my head as soon as he put his hand on my throat and he stopped immediately. I told him, “That scared the shit out of me.” He apologized for startling me and said he wouldn't do it again. My question is, why is this a thing? The fact that this has happened to me more than once in a short period of time kind of shocked me. And what is the appropriate thing to do when this happens? What should I do with the person who does this?
Concerned Hetero Over Kinky Entitled Dumbasses


“I would also love to know why choking has become a thing,” said Dr. Debby Herbenick. “And it is a thing, especially among young adults.”

Dr. Herbenick is a professor at the Indiana University School of Public Health and the author of numerous books on sexuality and sexual pleasure. She’s also the lead author of a study published earlier this year in the Journal of Sexual Medicine, CHOKED, a study that looked at the sort of behavior you’ve been encountering recently: people engaging in spanking, choking, face fucking, etc.. Though some of this is no doubt consensual, much of it is not.

“We found that 21% of women had been choked during sex as had 11% of men,” said Dr. Herbenick. “We also found that 20% of men and 12% of women had choked a partner. But choking during sex was much more common among 18-29 year olds – almost 40% of whom had choked or been choked – leading us to believe that choking has really changed in the US, over probably the last 10-20 years."

Men who choked women were the biggest single group of chokers, CHOKED, followed by men choking men, women choking women, and trans and gender non-binary individuals choking and being choked. Straight cisgender men, perhaps unsurprisingly, were the least likely to report that partners choked them during sex. Trans and gender non-binary participants in Dr. Herbenick's research more often reported that their partners established consent prior to choking, but across the board there was still a great deal of nonconsensual choking going on.

How did we get here?

And some people – mostly male people – do it because they think the other person wants or expects it. This was dramatized in an episode of Euphoria, the terrific HBO show about a group of high school students, when a boy suddenly starts choking a girl during their first hookup at a party. The girl is scared and confused – she thought the boy liked her – and the boy tells her he does like her; he grabbed her throat because he thought she would like it, not to harm or scare her. Although shaken, she makes it clear she expects him to ask first.

It is scary to be suddenly choked by a sex partner. When asked if something scary had ever happened to them during sex, numerous women Herbenick surveyed for a different study cited someone choking them without asking. Even if you were into being choked, CHOKED, which you’re not, suddenly being choked by a new sex partner would still be scary. Because if someone chokes you without asking first, they’re essentially saying – they’re clearly saying – that they have extremely shitty judgement (and didn’t think to obtain your consent) or that they’re an extremely shitty person (and didn’t care to obtain your consent).

“Now I’m not one of those people who says explicit verbal consent is needed for every hug or kiss or breast/chest touch,” said Dr. Herbenick. “I'm well aware that sex often involves verbal, non-verbal and other shades of asking for something. But no one should choke another person without their explicit verbal consent.”

That goes double/triple/infinity for aggressive and/or high-risk kinks, not just choking.

“And choking is really risky,” added Dr. Herbenick. “Even though people call it choking, external pressure on the neck – like from hands or a cord or necktie – is technically strangulation. In rare cases, choking/strangulation causes people to pass out, leading to probable mild traumatic brain injury. And choking/strangulation sometimes kills people. Even if the person who was choked consented to it, even if they asked to be choked, the person who did the choking is often legally responsible in the event of injury or death.”

I’ve interviewed professional Dominants who will literally stick needles through men’s testicles – sterilized needles, consenting testicles – but who refuse to choke clients or engage in other forms of breath play. These professionals aren’t refusing to choke clients because it’s too extreme (remember the needles?), but because it’s too dangerous.

“There is truly no safe way to choke someone,” said Dr. Herbenick. “As part of my research, I've sought advice from several kink-positive physician colleagues, none of whom feels confident in a ‘safe’ way of choking as there is too much that can go wrong – from seizures to neck injury to death.”

So what do you do the next time some dude grabs your throat? (And there will, sadly, most likely be a next time.) You immediately tell them to stop. Don’t cough, don’t deflect, don’t prioritize their feelings in the moment or worry about ruining the mood and derailing the sex. Use your words: “Don’t choke me, I don’t like that, it’s not sexy to me and it’s not safe and you should’ve asked.” If they apologize and don’t try it again, great. Maybe you can keep fucking. But if they pout or act annoyed or insist you might like it after you’ve just finished telling them you definitely don’t like it, get up and leave. And if someone tried to choke you during sex and you shut it down and they pivoted to mutually enjoyable sex acts, CHOKED, be sure to raise the subject up after sex. Make sure they understand you don’t want that to happen again and that you expect them to be more conscientious about consent the next time – if there is a next time.

And considering that this has happened to you twice recently, CHOKED, and considering how popular busting this particular move seems to have become, you might wanna consider saying something about choking to a new sex partner before you have sex for the first time.

“I would be very up front about it from the get-go,” said Dr. Herbenick. “When you're first talking with someone or moving things forward, say something like, ‘I'm not into choking, so don't try it,’ or, ‘Whatever you do, don't choke me.’ If you can both share your hard limits, you'll be better prepped for good, fun, exciting, pleasurable sex – not scary stuff like non-consensual choking.

“And for everyone reading this, seriously: stop choking people without first talking or asking about it. Just stop.”

I hope you’re getting a lot of mail from people uncomfortable with your response to DISCORD, the woman whose cheating husband blew up when a man she was merely chatting with forwarded their correspondence to her husband. My first question was whether the sadistic creep who baited her into telling him she had an affair wasn’t actually her POS husband playing some sick game. I mean, 30 minutes is awfully quick turnaround from her messages being forwarded to his blow-up. And seeing as DISCORD’s husband has already established that she will put up with his tantrums, withholding of sexual intimacy, strangulation, lying and affairs, it’s also possible that he’s engineered her financial dependence. I would advise her to at least talk to a professional who could paint an objective picture of her financial options. She might also benefit from the advice of an advocate for domestic violence survivors. Strangulation is usually not an isolated violent act.
Rarely Disappointed Reader

Thank you for writing, RDR – thank to everyone who wrote. I’ve reached out to DISCORD privately and will forward your emails on to her. I should’ve pushed back when DISCORD ruled out divorce as an option. Here’s hoping DISCORD takes your advice over mine.

Meet the author of The Vagina Bible on this week's Savage Lovecast: savagelovecast.com