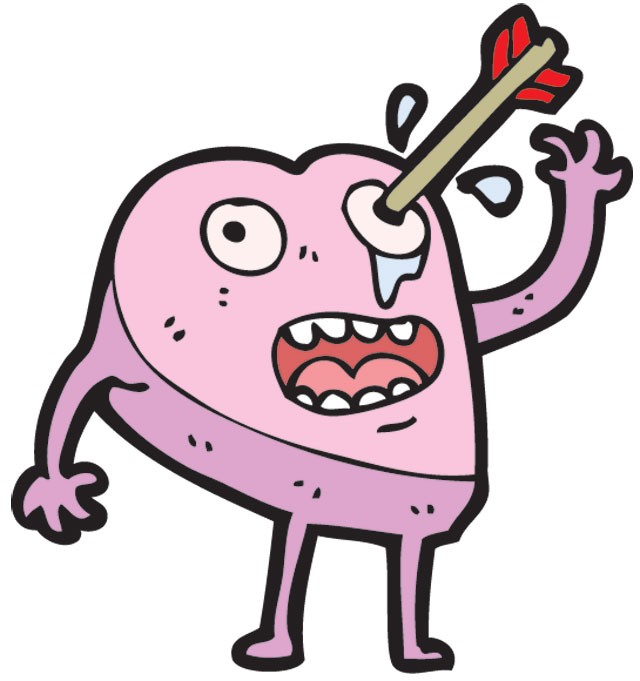 DEAR READERS: Last week was made of problems. The bombing of the Boston Marathon, the explosion that leveled a small town in Texas, the rising tide of anti-gay violence in France, the North Koreans being North Korean. And when I sat down to write this week’s column – while the manhunt was still under way for the second bomber in Boston – it occurred to me that the last thing the world needs right now is more problems. So instead of the usual sex problems, STI problems, CPOS problems and DTMFA problems, this week I’m only running letters from people who don’t really have problems. Because we could all use a break.

No problem here. I’m a straight 36-year-old guy. My wife has always been great about indulging my kinks – some femdom role play, lots of OTK spankings, rare d/s three-ways – so when she announced at age 34 that she had a kink of her own, I regarded it as my mission to make it happen. We just got back from a trip to see a safe and trustworthy friend in Los Angeles who “paid” me to have sex with my wife. (He put 20 $100 bills on the bar at the hotel, but it was money that I had given him.) My wife was so turned on, but she was also grateful. When it was over, she kept saying how much she loved me for being the person who made her paid-for-sex fantasy come true. People who stand in the way of their partner’s fantasies don’t realize what they’re depriving themselves of – so much love and gratitude!
Her Sub Pimp

Thanks for sharing, HSP!

I just started dating a guy who seems perfect in almost every way. (I’m a guy, too.) He’s cute, fun, charming, smart and successful. There’s only one thing that’s bugging me. He has a super-furry ass crack. The funny thing is, I can tell he trims the hair on his legs with the longest guard on the trimmer. All he’d have to do is keep going up onto his ass and into his crack. Yes, I know some guys find a furry crack to be a big turn-on. I am not one of them. We’ve been on four dates, and actually gotten fully naked only once, so it’s not like I feel so totally comfortable with him that I can just come out and say it.
Really Into Men Smooth

Your letter reminds me of a funny conversation I overheard at the gym:
Guy #1: “You should grow a goatee – it would feel great when you rim me.”
Guy #2: “I have a goatee when I rim you.”
Sounds like you have a beard when you rim your new boyfriend, RIMS, and I would advise you to get used to bearded rimming for the time being. You’re only four dates and one fully naked Big Gay Sex Romp into this new relationship, which is too soon to start asking for body mods. But once you hit, oh, 20 dates and a dozen Big Gay Sex Romps, I think you could offer to give him a hand with those clippers.

No question here, just a thank-you. Last week, my 16-year-old son told me that he has a crush on his best friend … who just so happens to be a 16-year-old boy. I’ve known he was gay since he was about 4, but without your column, I don’t think I would’ve been prepared for his “revelation.” You and your readers taught me the importance of letting him know that I will always accept him, love him and support him in any decision he makes. The best part: He wasn’t really worried about telling me he’s gay; he was worried that I wouldn’t let his crush spend the night anymore. (And he was right to worry!)
Proud Mom

After reading that you intend to “support [your son] in any decision he makes,” I started to compose a mildly scolding response in my head. (“Why would you do that? Gay kids, like straight kids, need their parents to be their parents. Your son needs you to meddle lovingly, to criticize constructively and to help him pull his big gay head out of his big gay ass when it needs pulling. And it will, because gay kids make bad decisions, too.”) But you made it clear at the end of your letter – he was right to worry about those sleepovers being over – that you aren’t confusing “support my gay son” with “sign off on any damn thing my gay son wants.” Well done!

I am an 18-year-old British queer girl who was recently involved with an older woman while visiting the United States. She told me about your “campsite rule,” and she followed it to the letter and was generally wonderful. I’ve since moved back to London and told everyone I know about your column. As a result, there’s a small group of teens running around North London that adores you. I hope we can spread your excellent advice and make as many people as possible into GGG partners.
CC

Thanks for the lovely note, CC, and tell the older woman I said thanks – for honoring the campsite rule and for helping to build my readership in the U.K. by turning you on to my column.