A reader responds to city's crackdown on food sharing 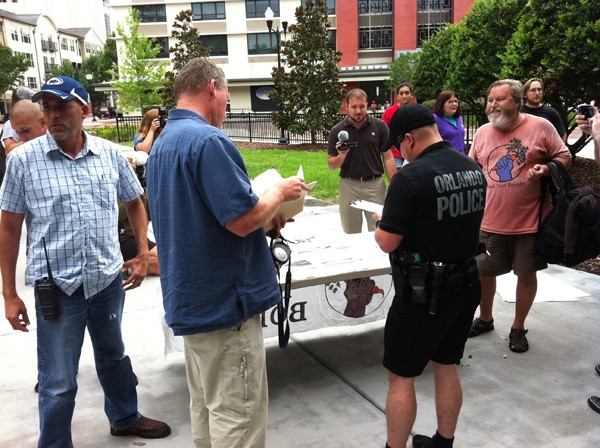 In regard to the recent press coverage of Food Not Bombs' public food sharing at Lake Eola, and the city of Orlando's arrests of those who participate in them, I would like to make a couple of points – some as a matter of fact, some as a matter of theory.

First, there seems to be a misperception about Food Not Bombs, who we work with and what we do. We share food with the public. A percentage of the people at our food sharings might be homeless, but in 2011 our perceptions of what a homeless person looks like are based largely on unfounded social prejudices and fears. We share food with several people I know to be homeless, but I've also talked to others who have homes, jobs, kids, issues or a combination thereof.

Obviously, poverty is a complex issue, and Food Not Bombs does not seek to solve it alone. According to the Southern Poverty Law Center, there are 9,000 homeless people in Orlando, and Food Not Bombs cannot supply them with all of their meals, much less meet their emotional, educational or other needs. We are a part of what ought to be a much larger puzzle, consisting of a large and diverse community of people who can share what they've got to give.

To put it simply: Those who choose to live in an area that serves as the center of our sorry excuse for a bus system, as well as the center point for several institutions that provide services to impoverished and homeless Orlandoans, will encounter the homeless. Even if Food Not Bombs weren't  providing food at Lake Eola Park, there are still 40 other weekly food sharings that take place downtown at various homeless-services agencies. In fact, on June 15, police distributed leaflets that told people where to find them.

Mayor Buddy Dyer has noted that if Food Not Bombs were concerned about feeding the homeless, we'd be sharing food legally like the rest of the groups downtown. City Hall insists that our feedings result in the homeless dispersing around the downtown area, sleeping on porches and using bushes as toilets. If there are 40 other legal food sharings taking place downtown weekly, though (compared to the two we host), don't they also contribute to those same problems? What's different about the "aftermath" of our food sharings and the city-approved sharings that happen elsewhere?

Do people go and eat and stay at downtown soup kitchen Daily Bread indefinitely, or do they leave and go somewhere else when they are  finished? What would stop them from acting  any differently on stomachs full of "city-approved" food as opposed to the food we provide? Maybe it's not the dispersal of the homeless after "illegal" sharings that has the city stressed out – maybe it's just that we won't go along with the city's quest to hide the homeless.

Orlando Sentinel columnist Mike Thomas suggested that Food Not Bombs' mission is to rub the homeless in the public's face. "That has created a conflict with the homeless, who have as much right to public places as the public who pay for them," he wrote. But the fact of the matter is that homeless people are part of the public and to assume that the homeless don't contribute to the taxes that pay for our public places mocks those who do back-breaking labor for less than it costs to live indoors and the working poor who don't have enough to eat.

Thomas also stated that Orlando Food Not Bombs unsuccessfully argued in federal  court that the city was infringing on our rights by making our public feedings illegal. Technically, that's not correct because in the first round of court hearings, we actually won. In the appellate stages, the status of our actions as expressive conduct, protected by the First Amendment, was upheld. But the court did uphold the city's "time and place" restrictions on public feedings, meaning that it didn't find the city's measures to restrict Food Not Bombs' activities unnecessarily burdensome. But sharing food means you should go to jail? I'd love more discussion on that topic.

Even though many of us have been arrested, the truth of the matter is that none of us want to go to jail. None of us want to be on the news every day, our images and words twisted against us to demean and dismiss our actions.

We won the federal case in 2008. We thought we were done, but the city continued its crusade to criminalize poverty and keep us in the crosshairs. We want to share food in the park that our tax dollars support – the park where we've shared food continuously for the past six years, that we've defended as a public space, that we have a constitutional right to be in without incident or the unwanted attention that the city's relentless efforts have forced upon us.

Our mission is to make a statement that food is a right, not a privilege. We will continue to make that statement until the last belly is full.

If you are reading this at home (wherever you call home), come join us at one of our "large group feedings" and see for yourself what it's about.

Ryan Hutchinson is a member of Orlando Food Not Bombs.