In this month’s Another Round pub crawl, we explore Flagler Avenue and its watering holes 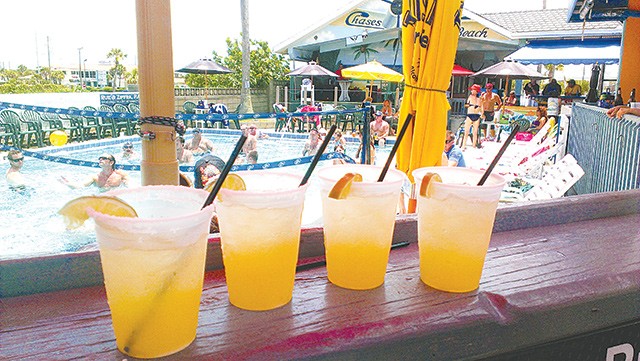 New Smyrna Beach might be considered Daytona Beach’s quiet neighbor to the south, but in no way is that an indication of this beach town’s lively bar scene. It’s been a favorite beach of mine since I first moved to Central Florida, so when I met up with friends in NSB for a DIY pub crawl, we were fully ready for a jam-packed day of seaside drinking.

Starting at the southern end of the beach, we grabbed seats at the small outside bar at JB’s Fish Camp (859 Pompano Ave.) for a round of Key West Sunset Ales and baskets of steamed clams. This laid-back spot along the Mosquito Lagoon, decked out in kitschy nautical trinkets, not only offers indoor and outdoor bar/restaurant areas, but you also might catch a manatee sighting near the dock while listening to live reggae music.

After filling up on fresh seafood, we were primed for one of the rowdiest bars in the area, Chases on the Beach (3401 S. Atlantic Ave.) just to the north of JB’s. With intense pool volleyball tournaments, two massive covered bar areas and a solid location directly on the beach, Chases has that signature Jimmy Buffett style written all over it. So, in true Parrothead fashion, we ordered on-the-rocks margaritas – quickly followed by a round of brightly colored Jell-O shots.

Chases could keep beach-side drinkers quenched all day, but we were on the move to something a bit more chill at Toni & Joe’s Patio (309 Buenos Aires Ave.), another right-on-the-beach gem known for its friendly staff, enormous umbrella-covered patio and live steel-drum bands. I hesitantly opted for their specialty, Pusser’s Painkiller, mainly because it’s the type of libation that’s filled with so many flavored liquors it tastes like fruit juice. Finish one of these and you may become an all-out beach bum for the rest of the day.

However, we had our eyes set on Flagler Avenue, the popular main drag of New Smyrna Beach – specifically, burger-and-beer stalwart The Breakers (518 Flagler Ave.) at the beach end of the avenue strip. Not only would I highly recommend this beach shack’s tasty burgers, but I also suggest ordering a drink (in my case, a piña colada) and then grabbing a stool along the wall facing the beach for prime people-watching.

The burgers filled our bellies, but we were thirsty to know where, in this tourist-filled town, the locals hang out, and a kind bartender directed us to the Flagler Tavern (414 Flagler Ave.) merely a few steps down the street. With “tavern” in the name, we were expecting dark and smoky, but it was the exact opposite – its vibrant neon-green walls and beach-themed mural put us in the mood for a kamikaze shot. With that many drinks in us, “kamikaze” seemed an apt description of this day’s downward drunken spiral.

But we pressed on, and the imbibing continued a little further down Flagler Avenue at the somewhat recently opened Irish pub Tayton O’Brians (410 Flagler Ave.). It may be down to the dim lighting, but my memory begins to fog at this last stop, though I remember an impressive list of 250 beers, from which we ordered a couple of Victory Brewing Company Golden Monkeys and Florida Beer Company Swamp Ape IPAs.

I also recall using a Sharpie to sign our names on a dollar bill, which we then stapled, along with the hundreds of others, to the ceiling, in the hopes that, in the smallest of ways, we left our footprints in the sands of New Smyrna Beach.

Check out our favorite photos from the New Smyrna Beach pub crawl.