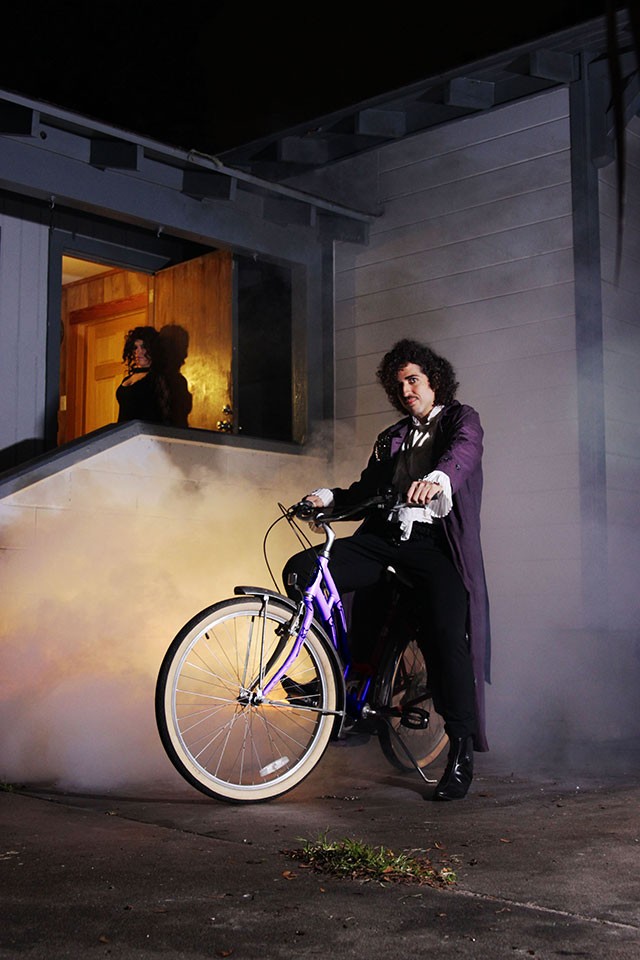 Prince’s Purple Rain frequently joins ranks with the greatest albums of all time. His sixth album, it has sold more than 20 million copies, entertaining the masses and influencing a torrent of musicians, not just in the ’80s, but well into today. And this week, we’ll get to experience it live, thanks to local musicians hoping to cover more than just Prince’s songs.

Don’t be deceived by the fact that this is a cover show – some of Orlando’s most schooled musicians put a ton of effort into embodying Prince & the Revolution in order to play the pop legend’s iconic record from start to finish to celebrate the album’s 30th anniversary. As Prince, we have Gerald Perez (Maximino, Thee Wilt Chamberlain), who is not only dressing the part, he also convinced Thee Wilt Chamberlain bandmate Kasey Donovan to loan him a guitar just like Prince’s, which he’s stripped and converted to look as close to the artist’s as possible.

“It was the same exact guitar, but it wasn’t the right color,” Perez says. “So, I asked him … can I turn it into the Prince guitar?”

Joining Perez are Matt Kamm (Telethon, Me Chinese), Adam Ibrahim (Sterling Schroeder & the Chosen Ones, Me Chinese), Bethany Avello (The Moon Is a Disco Ball), and Alias Punch’s Jasper Bleu and Dan Drennon, working to recreate the Revolution as closely as they could on each of the album’s nine tracks. According to Perez, the enthusiasm for the music and attention to detail both sonically and visually will be readily apparent to Prince superfans who turn out.

In addition to morphing themselves for the night, Will’s Pub will also have a makeover to recreate the First Avenue scene (in Minneapolis) where Purple Rain was born, including replacing the signage out front with First Avenue nightclub’s, blacking out the front windows of the pub and affixing white stars with local bands who’ve notably rocked Will’s in the past – plus, they’re changing all the lights outside the bar to create a purple glow.

Next door at Lil Indies, DJ Nigel will spin a set of music that influenced Prince, in what has been deemed “Prince’s Lounge” for the night, including a Prince tribute art show by the talented illustrative force of Orlando zine crew Is It Over Yet?, including works by Cody Zeigler, Daniel Harris and Brandon Geurts.

For Perez, this show presented an opportunity to delve into the pop genius of Prince, whose masterful falsetto has majorly influenced him in his own songcraft.

“I’m always drawn to his voice, but what he can do when he screams is uncanny,” Perez says. “He has such control, and even just on a scream – it can either be an intimate scream or it can be a very aggressive scream, but he still has all this control that you don’t really find from anybody.”

Throughout the pub, expect to see live Prince footage and music videos (muted), and rumor has it pub owner Will Walker will be making a special “purple drink” for the occasion. There are more surprises in store – including a cover set by Eugene Snowden performing music from Morris Day and the Time – but expect Prince’s “The Beautiful Ones” to be a real highlight of the night.

P.S. Stardust Video and Coffee will be screening Purple Rain the movie at 8:30 p.m. Thursday, Jan. 30, including fancy purple drink specials, if you’re too eager to wait for Prince’s magic.