The sunny glow from a copper-mesh skeleton catches the eye in a small room that houses an otherwise unsensational collection of art at Cornell Fine Arts Museum. The shimmering bones are the work of a woman who spends her professional life studying skeletons, and is one of 12 artists invited to take part in a unique exhibit at the Cornell.

Double Vision: Artists' Responses to the Collection, is based on a premise as tried-and-true as the mentor-student dynamic. Curator Theo Lotz invited established Orlando-area artists to select one piece from the museum's prized, 6,000-piece permanent collection. Thus inspired, the artists created their own works riffing off the work of their celebrated predecessors.

The result is an exhibition that blends old and new, a multilayered experience that resonates long after leaving the gallery. There are no flashing lights or signs demanding that you pay attention to what's going on. If you want to figure this one out, you'll need to put in some old-fashioned legwork.

"This isn't necessarily a show of Ã?the best,' although all of these guys could be showing anywhere in New York right now," Lotz says. "It's a show about 12 people and their very different responses."

In what will be his last job at Cornell before moving to UCF to work with public-art acquisitions, Lotz handpicked his players, briefed them about their mission and brutal deadline, and then cut them loose. No matter his expectations, in the end, he says, he was "surprised at how perfect everyone's selections were."

Those eye-catching bones are the contribution of Cynthia Jimenez, who sees the human skeleton as a wondrous endowment, a triumph of form and function, and the original sculpture that unifies mankind. "There's not much difference in the skeletons of animals, either," she says. "The parts are all the same, they are just arranged differently."

The sculptor herself doubles as a massage therapist at Central Florida Massage on Edgewater Drive, which she owns with her husband, a martial-arts practitioner. The wholesome, Kansas-born and physically fit blonde is an expert on both human and horse anatomy; her metallic sculptures of both are on display around town.

Jimenez is in demand around the country by doctors, sculptors, veterinarians and riders as an anatomy instructor. She's also an expert in "osteological preparation," meaning she cleans bones and readies them for study. Skeletal abnormalities offer valuable insight -- in a recent case she found that a horse had a damaged jaw that kept it from getting enough nourishment.

Jimenez doesn't dwell on the dark side of her avocation, but she acknowledges it's a little strange to have Tupperware containers full of bones in her garage. Her studies have given her an intuitive understanding of the network of bone, muscle and tissue, which she translates through her skillful hands.

Jimenez's mesh skeleton -- a man positioned in friendly repose, laying on his side propped up by one arm, head held high in a, "Hey, baby, how you doing?" posture -- is an oddly attractive mix of science and art. The anatomic details are painstaking, which helps explain why it takes her a year to create a single sculpture, and why they sell for a price many would consider a decent yearly salary.

A 3-D mapping of the human body's connective tissue has not yet been created, says Jimenez, and she believes that her copper-mesh methodology is the closest thing yet to such an achievement.

Inspiration for her "Reclining Figure" came from a painting by Henry Moore (1898-1986) titled "Reclining Figure: Idea for Sculpture" (1982). Moore's primitive form leans back on her elbow in a comfortable resting position, like a woman -- a big-bodied, masculine-looking woman -- sitting on the beach looking into the surf. (Moore had domineering-mother issues, says Lotz.)

That Jimenez chose a masculine interpretation was deliberate. "The female body has been portrayed in so many sexual ways," she says. "It's been done, done, done."

And the male form is generally portrayed in "brutish, guts and glory depictions. It's always bugged me. I wanted to present a male figure in a natural-life situation."

Jimenez immersed herself into Moore's work and says that she identified with the "organic thing" he had going on. "He loved to look at bones and rock ... and he liked primitive art." Jimenez has a love of Renaissance art and found herself responding to the works of the contemporary Englishman in much the same way: "You look at it and weep; it's so powerful and so real."

Kick in his boots

"I knew Pat Greene would not have a traditional response, that he would have something more experimental," says Lotz.

He was right. The Winter Park native is a seasoned local personality who's seemingly omnipresent on the local arts and music scene, though he rarely exhibits his own work. 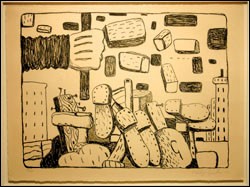 Greene's muse was a cartoony, black-and-white lithograph by Philip Guston (1913-1980), "The Street," created in 1970 and colored by this country's previous decade of social rebellion. The piece features a dominating gloved fist wielding a nightstick in a fractured cityscape where the bottoms of work boots and bricks are upended in motion. "I liked the unrest and the proletariat feel it had," says Greene.

And he liked the idea of dealing with the subjects of surveillance and security in these times of threatened civil liberties.

Greene's multimedia installation, "Video Surveillance of Four One-Act Street Scenes," stands next to the framed Guston work. It channels Guston's subtext of oppression into a re-creation of a stale, roughly crafted security-guard booth. Inside, the guard house is appointed with an ashtray full of cigarette butts -- one of many homages to Guston's favored icons -- a few photos, an American flag, a telephone, a police scanner, a coffeemaker housing a moldy pot of brew, ID badges and other subtle inclusions that build layers. A video monitor split-screens four continuous loops featuring everyman activities as portrayed by some of Greene's longtime cohorts, including Steve Garnett, his former bandmate in the experimental group Obliterati. (The group is gone, but Garnett and Greene, who plays violin, are circulating in Toothpick Rich Man; and Greene still mans his WPRK-FM radio show, "Jazz in the Bible Belt.")

Overall, there's an unsettling sense of both familiarity and anonymity in the creations of Guston and Greene. One of the qualities of Guston's life and work with which Greene could identify is how he never became attached to any one movement. "He was very aware of trends," says Greene, "but you get the idea he wasn't a part of them; he wasn't an insider." In Greene's endeavors, be it writing, filmmaking, music or some other form of expression, he doesn't want to be perceived as an insider either. "I don't want my art to be just for art's sake."

"Lotz picked me because I was an odd choice. I don't really show my work as often as the other people... I want to be serious, but there's always going to be dark humor. That's what I see."

Like a stone tossed into a pond, Camilo Velasquez's entry creates a ripple effect. Starting with his selection of art -- a colorfully beaded wedding dress from a Plains Indian tribe that has never been on display -- the process took him on a personal journey that reached back to his cultural roots in Colombia, South America, into his grief for his mother who died shortly before Lotz's invitation.

Next to his installation, "It's Only Perception" -- fashioned from red kidney beans, wild rice, epoxy resin, wood, Plexiglas and photographs -- his typed statement explains: "Most art is autobiographical in nature, whether we know it or not. Immediately, when I saw the Native American marriage dress, it produced in my mind's consciousness a cascade of images and stories from childhood related to my family's arrival in this country; this was pure synesthesia at its best."

The rice is lacquered onto an oval shape that is encircled by a similarly prepared oval of wild rice -- together they look like a planet and its orbit. To the right sits a diminutive religious ensemble of burned matches and plastic nuns, which draw into Velasquez's work his parenting by a mother who was a believer and a father who was an atheist. Further over sits a black-and-white photo of his parent's wedding party; his mother in a tailored white suit.

Velasquez's says "It's Only Perception" tells a story, one that comes full circle as it connects the meticulously beaded garment -- adorned with icons that spoke to the future of the native couple as well as honored their culture -- to his mother's own businesslike wedding suit, which signaled the start of her family commitment and the many hardships she would endure upon becoming an immigrant in this country after the fall of Peron in the 1950s.

"It is a catharsis of my mother's life. Through her life I not only understand her but other women as well. Women are the progenitors; men think they are. I do reside in a masculine world. But the real strength is in women."

These are three profiles out of the 12 curious teamings. Awaiting discovery are other interpretations by local artists Richard D. Colvin, Kevin Harlan, Paul Horan, Terry Hummel, Arthur Jones, Harry Messer Smith, Randall Smith, Lynn Whipple and John Whipple. The exhibit continues through Sept. 14, and there are 3 p.m. lectures on Tuesdays by different artists that can help to fill in the blanks. (See sidebar with schedule.)

But don't hesitate to grab a museum worker to help answer your questions in order to get the most out of your visual quest. In Lotz's introduction in the show catalog he writes that the exhibition "is a testament to the vitality of Central Florida artists and to the important role that the Cornell Fine Arts Museum can play for each new generation of artists." But it's not just about the artists or the museum; it's about the viewer, too, and nurturing the next generation of art appreciators.