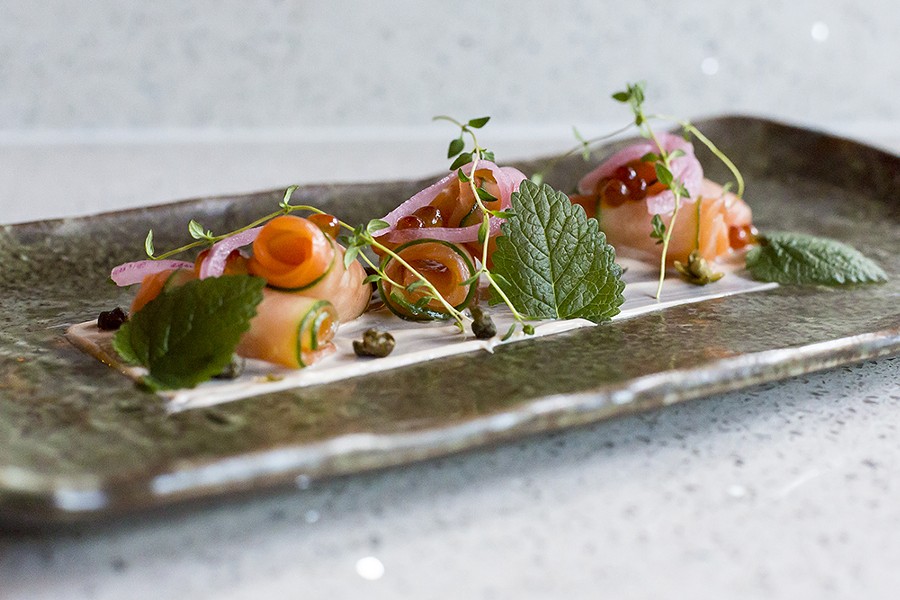 Long before his now-popular Osprey Tavern opened its doors, local restaurant impresario Jason Chin spent a decade nurturing, molding and steadily improving Seito Sushi into the slick joint it is today. Much like Baldwin Park's dining scene, Seito Sushi languished for most of those years, but things seemingly took a turn for the better once Austin Boyd (Dragonfly Sushi, Norman's Orlando) joined the team in late 2014. Since then, Seito Sushi appears refreshed and revitalized, and their dishes ever more Japanese (or "New Japanese"; so says the menu). The trickle-down buzz from Osprey Tavern across the street certainly hasn't hurt, as Seito appears as popular and bustling as ever.

Waiting an inordinately long period before our orders were taken gave us plenty of time to appreciate the Japanese illustrations on the squarish bill of fare, but the izakaya menu was what drew our notice. Small-plate items, like slices of chimichurri-torched wahoo ($12) over a wasabi-avocado puree, are featured on the weekend-only menu. The wahoo, as it turned out, was beyond oishii. Really. Order this. Bo ssam bao buns ($10) with smoky pork belly, fried oysters, kimchi and lettuce were marvy too, but what of the ssamjang? The spicy paste was all but absent, which just made for dry bites. A veggie ramen ($12) is listed as an izakaya item (yes, the ramen trend has officially become entrenched), but we looked to the main menu and opted for shoyu ramen ($14) instead, and it's a choice I'd make again in a heartbeat. A soothing broth fashioned from roast chicken and soy is liquid gold, with house-made noodles, cuts of grilled chicken thigh, slow-cooked egg, corn and carrots the proverbial nuggets. A side of shishito peppers ($6) graced with nori and bonito flakes are a complement to anything, in my opinion, but I especially enjoyed them in between sloshes of ramen.

Save for soft and mealy bigeye tuna, the moriawase (chef's selection) of sashimi ($30) – gossamer slivers of branzino, Faroe Island salmon, Norwegian mackerel, hamachi, Deer Creek oysters and sweet tamago – otherwise proved to be a wise choice. The "Distinguished Gentleman" ($16), comprised mainly of lobster, American wagyu and truffle aioli, was like surf and turf in a roll.

Our server could've been a little less blasé and a little more refined, though the same could be said of dessert. Take the "bananas Foster" ($7), for instance: One server presented us with a bowl of vanilla ice cream, and another spooned cooked bananas into the bowl. Really? I could understand if the other server were there to perform a tableside flambé, but spooning bananas into a bowl? C'mon. Sure, ginger liqueur and black sesame dress up the dessert, but the tepid and mushy bananas made it an utter bore. Five-spice French toast ($6) carried nary a whiff of one spice, let alone five, in the brioche, so I'll say this: Come for the sushi and izakaya; don't stay for dessert.

Requisite craft cocktails, along with a decent wine, sake and beer list, might keep Baldwin Parkers slaked, but it's Chin who keeps them thirsty for more. With Osprey Tavern and the renewed Seito Sushi, he's single-handedly injected new life into the gastronomic heart of Baldwin Park. It might be premature to say a resurgence is underway in this decade-old neighborhood, but Jack's Steakhouse is also hopping onto the chef-driven trendwagon by rebranding itself to Provisions & Buzz Co. (look for it Nov. 5). In recent years, restaurants along New Broad Street have failed to impress me, but I get a sense this might change in the near future.

Baldwin Park, this could be the beginning of a beautiful friendship.