Selections: Our picks for the best things to do in Orlando, March 15-21 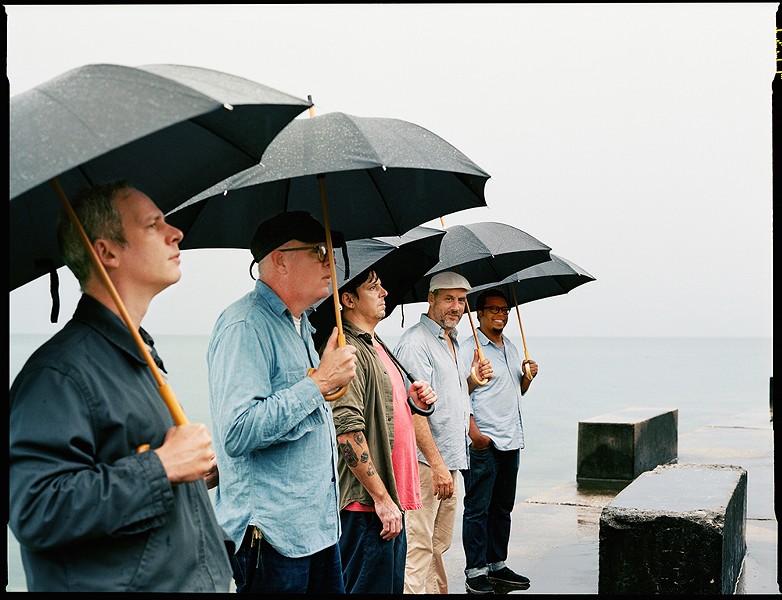 Music and comedy is one of those pairings like peanut butter and chocolate, or pineapple and pepperoni (shut up and try it), which just seem to work for whatever reason. Take the career of Dave Hill, a comedian who got his start as a musician playing in '90s one-hit wonders Sons of Elvis, appeared on Fuse TV's Hoppus on Music as a correspondent for two years, and whose current band, Valley Lodge, is responsible for "Go," the catchy opening theme to HBO's Last Week Tonight With John Oliver. Hill stops into Will's Pub this week with Greg Barris, a comic whose "Heart of Darkness" shows are known to close with a musical rave-up. Plus, Tierney Tough, the frontwoman of noted local indie pop band the Pauses, is slated to provide music – though we kind of hope she tries her hand at cracking a few jokes as well. – Thaddeus McCollum

If there's one thing that Orlandoans know how to do well, it's brunch. Here in the City Beautiful, there's nothing a Bloody Mary and some bacon can't fix, and you'll find all your favorite boozy breakfast treats at United We Brunch. Come check out brunch destinations from all over the city coming together to provide you with the ultimate afternoon meal. There'll be plenty of your go-to local restaurant favorites, including Canvas, First Watch, Maxine's on Shine, Foxtail Coffee Co., Kasa and Red Mug Diner ready to keep the griddles hot and the mimosas flowing. Don't worry, we won't judge you for wanting seconds: After all, who can resist the sweet euphoria only an overload of sausage, eggs and pancakes can provide? – Deanna Ferrante

An intriguing bill boasting a couple of generations of local creative outsiders and stark differences in methods of expression makes this a mandatory event for Saturday night. On the one hand you have Ootheca, a new solo project from local stalwart Brian Phillips (Anatolya, Discovery of Magnetic North). But whereas DMN was soothing sinewave ambience, early listens to Ootheca reveal a much more filth-ridden and blown-out industrial sound, similar to SPK or Throbbing Gristle. Then there's local poet Ashley Inguanta, making a much-welcomed return to the stage after a slate of shows following the release of her latest volume of work – Bomb – late last year. Filling out the bill is the surprising but satisfying inclusion of Tiger Fawn, a young musician but at this point a scene veteran in her own right. Tiger Fawn has been laying low so far this year while putting the finishing touches on an album, and no doubt some of this material will be aired on stage. All proceeds from the evening go toward Organize Florida, a nonprofit dedicated to social and economic justice. – Matthew Moyer

Postcards From the Edge

Carrie Fisher was more than just the actress who played Princess-turned-General Leia Organa in four of the Star Wars films. She was also a gifted writer and script doctor. Her 1987 novel, Postcards From the Edge, won her acclaim for its humorous take on serious issues like substance abuse, inspired by Fisher's own struggles and relationship with her mother, Hollywood legend Debbie Reynolds. Inevitably, the book was turned into a 1990 film – with a screenplay again written by Fisher – that stars Meryl Streep as "Suzanne," the fictionalized version of Fisher, and Shirley MacLaine as "Doris," standing in for Reynolds. Both Fisher and Reynolds died within days of each other at the tail end of the celebrity bloodbath that was 2016, but it's hard to watch MacLaine's showstopping performance of the Stephen Sondheim-penned "I'm Still Here" in Postcards and not be grateful that their talents, at least, remain with us. – TM

With doom and sludge metal, the discerning listener has to be increasingly picky, as so many bands get bogged down in cartoonish Black Sabbath signifiers and clichés, but thankfully, San Francisco's King Woman are reinvigorating the form. The brainchild of Kristina Esfandiari (also of the stellar Miserable), KW started as a solo venture and now has expanded into a full band, and as personnel expanded so did the scope of their eldritch sound. King Woman craft a bleak, anguished wall of tar informed as much by Chelsea Wolfe as by Grief. And for that matter, even beyond the Jarboe-esque commanding bellow of Esfandiari, we detect a pulpy deathrock influence. And why not? King Woman's new album Created in the Image of Suffering is definitely a prime noose-tightening soundtrack. Not only that, the goddamn thing is being put out by prime mover metal label Relapse in a beautiful vinyl edition. It's the perfect physical medium for a new set of songs that are fully realized and cinematic like the best horror and/or Tarkovsky films. We've been following King Woman since the Doubt cassette a few years back and are eager to see how this new sonic ambition plays out live, in the company of fellow metal iconoclasts Oathbreaker. – MM

Performance artist and actor Brian Feldman may be based out of Washington, D.C., now, but we're lucky that he still comes down to visit pretty frequently. He's known for such performance pieces as "The Skill Crane Kid," in which he locked himself inside a claw machine, "Leap Year Day," in which he jumped from the top of a ladder 366 times within the space of 24 hours, and "Brian Feldman Marries Anybody," in which he married a complete stranger in order to needle the idea that heterosexual marriages were somehow inherently more valid than homosexual ones. But his acting career began on the stage at Lake Eola's Walt Disney Amphitheatre, where he played the Third Witch in an Orlando Shakespeare Theater production of Macbeth at the tender age of 10. Feldman returns to that very stage this week with this performance, the details of which he's keeping under wraps, but it involves Feldman playing all 40 characters throughout the cursed "Scottish play." We're not sure what he has planned, exactly, but Feldman promises that it will be the most experimental thing he's ever done, which, coming from a guy who once passed off reading Orlando Weekly out loud as art, is saying something. – TM

Every year, Fab Fringe serves as the first big leadup event to May's Fringestravaganza, and as such we tend to think you can make some predictions about the festival by closely observing this fundraiser. Observations on Fab Fringe 2017: It's the first one without the actual presence of former executive producer George Wallace, but he laid the foundation for what's sure to be a great night (much like the festival). It features an accomplished out-of-town actress – Broadway's Carrie Manolakos, a singing-acting double threat whose cover of Radiohead's "Creep" Gawker.com called "upsettingly good" – more than ably supported/surrounded by our talented locals (much like the festival). And the price of admission goes to a very worthy cause – much like the festival, but with one important difference: 100 percent of proceeds from Fringe show tickets go to the artists, whereas Fab Fringe helps fund the lean machine that is the Orlando Fringe team. Not only will this night get you fired up for one of Orlando's best cultural experiences, you'll leave with the warm glow of knowing that you helped make it happen. – Jessica Bryce Young

Post. Post-modern. Post-punk. Post-mortem. Post-apocalyptic. Post-rock. Since the mid-20th century the antecedent has been tarred, affixed and bound to a multitude of words in the English vocabulary. The present offers no certain insight into the future, and these four letters once carried the charge of that uncertainty. Tortoise, Chicago's forebears of post-rock, found themselves post-six studio albums and birthing a seventh in January 2016, the first since 2009. Even following this healthy outlay of releases, there's something inarguably futuristic, something fresh and avant-garde to their sound still. Their compositions are thematic and self-aware – intentionally plodding, deliberately meandering. Their palette is bleak and white; washed but never pastel and never drab. This distinctly desaturated quality returns on Catastrophist: blurring, blending, brooding over, then bleeding out the motifs of the past. Each of the group's members are thoroughly accomplished and wildly prolific in their own right, and the seven-year gap since Beacons of Ancestorship has no relation to lack of inspiration. And with the present ever more fractured and foreboding, Tortoise's "everything must go" sonic approach has perhaps never been more timely. – John Rousseau

Does she have a new album out? No. Does it even fucking matter? No. Look, Stevie Nicks – vocalist for Fleetwood Mac when the remaining members temporarily bury respective hatchets anywhere other than in one another's backs, and a solo artist unsurpassed in terms of reality-building and mystique – at this point in her career is a singular figure who exists slightly outside of all pop narratives and promotional obligations. To say nothing of the mythmaking! Does she live in a castle by the ocean all by herself? Her only company being a small flock of regal doves, attentively watching as she plays an ivory piano long into the night? Well, yes, duh, but we're more interested in her total autonomy in her art and her work and her life. There are no Svengalis, no collaborators, no dead weight – and even above that, the lethal, sleek cyber-witch hooks and choruses embedded in songs like "Edge of Seventeen," "Stand Back," "Bella Donna" and the "Nightbird." She doesn't even have to touch the goddamn Fleetwood Mac songbook if she doesn't feel like it. At this point in the game, going to see Stevie Nicks live is akin to a religious pilgrimage; go pay your tribute to a pop Oracle of Delphi. – MM