Selections: Our picks for the week's best events, Oct. 12-18

Scroll through your own collection of pop albums or your little sister's, but it won't take too many virtual back covers until the name "Ludacris" is splashed across the track list somewhere. The 39-year-old Atlanta-based rapper is often credited with bringing Southern hip-hop to the masses. The genre's predisposition to anthemic party jams and boyishly suggestive lyrics soon went mainstream. Aided by visionaries like Lil Jon, Weezy and Trina, Luda took the sound nationwide, landing its current spokesman in our very own Flo Rida. Luda glided in style into Fergie's "Glamorous" and is responsible for carrying more than one Bieber hit. He even went down under to try and hype Australian Idol runner-up Jessica Mauboy – there aren't even any label connections there; we checked. Club-friendly punchlines and a disarming delivery just "urban" enough for Top 40 have kept him running long past the steam of 2006's Release Therapy, which got him the Grammy for Best Rap Album. After all of this, it makes sense he's playing at a college for kids just old enough to know him as "that guy on all those songs." – Adam Manno

Dani Lacerda, better known to discerning locals as the enigmatic loop chanteuse Tiger Fawn, is a delightful anomaly within Orlando's local music scene. Tiger Fawn focuses more on crafting atmospheres and moods within her music than traditional song structures, though a close listen will also reveal her interests in hip-hop and "Old Weird America" songforms. Tiger Fawn began as a more traditional trio, but now only Lacerda remains, surrounded by delay pedals, drum machines and all manner of arcane electronics and masks. Though Tiger Fawn has only officially released two songs so far – "King Mallard" and "Little Birdie," both set for an upcoming album – she is already a seasoned live performer, playing regularly in the area and having even undertaken a brief tour. The live state of Tiger Fawn 2.0 is based on cryptic visuals and costumes and a sound centered around Lacerda's strong, clear voice, encased in filigreed webs of electronics and reverb-heavy beats. Whereas Robert Smith made getting lost in the forest seem like a fate worse than death, Tiger Fawn makes the same scenario seem like a beguiling dreamscape. – Matthew Moyer

Ko-Ko, a man in the fictional Japanese town of Titipu, is made Lord High Executioner, and must find someone to execute by the end of the month, lest the Mikado (the Imperial ruler) take away his position. This is the plot of The Mikado, a comic operetta originally written by Gilbert and Sullivan in the 1800s. While the depiction of Japanese culture is ... uh, a little dated, let's say, the opera is actually more of a lampoon of British culture than anything maliciously xenophobic. The audience is treated to many upbeat songs, which are a nice contrast from the more tear-jerking fare you think of when you hear the word "opera." But the comedic, and honestly slightly absurd, plot is what really sets this one apart. – Martina Smith

The Mennello's sculpture garden gets new additions from three significant artists this week. Alice Aycock's two sculptures, "Waltzing Matilda" and "Twin Vortexes," were created as part of an extensive outdoor exhibit in Manhattan, and the artist credits the wind and the frenetic energy of city life in New York City for their inspiration. The exhibition also features horse sculptures by Deborah Butterfield, a series of metaphoric self-portraits representing deeply ingrained feelings of strength, beauty and inherent spirituality. Installations from Orlando- and Aspen-based Barbara Sorensen are also displayed; the recent acquisitions are largely inspired by nature and the "diverse materiality of our ever-changing environment." Sorenson will also be creating a site-specific installation that will continue her experimentation with materials, movement and form. – Aileen Perilla

In the weird, wild world of improv comedy, few names garner as much respect as Chicago's Second City. The storied theater company rose to prominence over the years as many of its alumni found fame on Broadway, in movies and in the cast of Saturday Night Live. This tour brings members of the theater's current touring company to town to show off their skills with sketches, songs and games, all based around the cities they're performing in. Drawing from Orlando history, current events and local newspaper headlines, the performers will craft a night of Orlando-centric gags (so expect some hurricane jokes). While this tour doesn't include any of the super-famous Second City stars, like Dan Aykroyd or Stephen Colbert, the troupe's batting average indicates that at least one of the young comedians poking fun at our city this weekend will be a household name at some point. – Thaddeus McCollum

The cooler weather (thanks, Hurricane Matthew!) means it's time for market season. Local artisans, crafters, vintage vendors and even record dealers spend the next few months setting up in parking lots and on sidewalks for a variety of outdoor shopping. This weekend, Will's Pub kicks off the season with its Will's A Faire, produced in conjunction with Southern Fried Sunday. The market tends to trend a little more rock & roll than most, with plenty of pop art and vinyl for sale. And since it's also an SFS production, plenty of bands – like Gary Lazer Eyes, the Oak Hill Drifters and the Uke-A-Ladies – provide the soundtrack while you browse the wares. There won't be the usual free barbecue like at a normal Southern Fried Sunday, but you can pick from plenty of food truck options after you work up an appetite from all that bargain-hunting. – TM

Puppets, along with clowns and plane rides, fall into that weird category of "Things Adults Fear That Children Do Not." Perhaps it's because children don't realize the inherent creepiness of being controlled by an unseen master who jerks characters around on strings. Aren't we all just puppets, if you think about it? Puppets of the government, of societal expectations, of our jobs – but the last one we really don't mind, we swear! Ha ha ha! What were we saying? ... Oh yes, puppets. Inexplicably creepy yet fascinating, puppetry is a performance medium that has waxed and waned in relevance over time. But this week the Central Florida Puppet Guild puts all mixed feelings about our felt friends to rest with their annual Puppet Slam, a showcase featuring skits and short films starring handmade puppets. The local puppet scene's (yes, that is an actual thing) stellar reputation combined with Central Florida's finest puppeteer talents guarantee a quality show we'd see voluntarily – no strings attached! (You're welcome; we thought that was a great pun too.) Now that we've confronted our fear of stringed characters, we need to tackle our fear of clowns. There's one beckoning us into the woods right now, claiming he's part of a national trend, but we bet he's just a misunderstood street performer with a perfectly good reason for behaving erratically! – Abby Stassen

The goal of a theater action, if it's an unfamiliar term to you, is to get as many people as possible to participate in a conversation about a current event, and to think about that event in fresh new ways. But you need not be familiar with the concept or even be a huge theater fan to want to see this particular "theater action." Everyone in Orlando feels a connection to the tragic Pulse shootings, including Margaret Nolan of local Kangagirl Productions, so she joined forces with East Coast production companies Missing Bolts and NoPassport to shape this project bringing together "distinct and powerful voices" from around the world. More than 70 plays were written by notable and emerging playwrights – like Israel Horovitz, Neil LaBute, Anders Lustgarten, Lindsey Ferrentino, Caridad Svich – in response to the shooting at Pulse and the growing devastation of gun violence in the United States and worldwide. Staged readings of those plays will be presented throughout fall 2016 at more than 50 venues, including this one. – Jessica Bryce Young 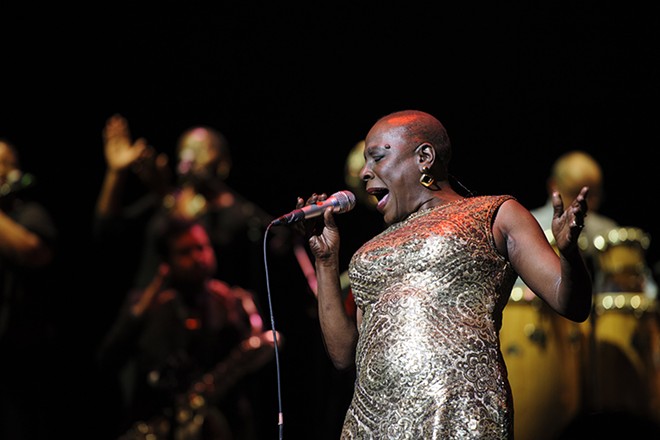 Anyone who’s seen Sharon Jones live knows the woman isn’t short on strength; she’s a born entertainer who struts across the stage belting out songs that hit the sweet spot between joyous and world-weary. When the 60-year-old soul singer was diagnosed with pancreatic cancer in 2013, though, she had to draw on a different kind of strength. Documentary filmmaker Barbara Kopple (Harlan County, USA; Shut Up and Sing) convinced Jones to let her film as she balanced life on stage with life as a cancer patient. The resulting film intersperses electrifying live footage of Jones, once called “too fat, too black, too short and too old” by a record executive, with heartbreakingly intimate moments showing Jones going through chemotherapy, losing her hair, and relying on her faith and love of music to get her through her ordeal. While the film tracks Jones through her eventual remission, the 2015 Toronto International Film Festival premiere of the doc coincided with Jones revealing that her cancer has returned and is now considered Stage Four. With the recent revelation that her Daptone Records labelmate Charles Bradley has been diagnosed with stomach cancer, it’s a dark time for fans of the soul revival that Miss Sharon Jones effectively spearheaded. But as this documentary attests, that music – so rooted in hard times – can ease any burden, if only for a little while. – Thaddeus McCollum