Selections: Our picks for the week's best events, Sept. 21-27

That name alone's a goddamn giveaway. This hard-core outlaw country traditionalist is actually the musical alter ego of comedy actor and writer Ben Hoffman (from Comedy Central shows like The Ben Show and Sports Show With Norm Macdonald). No surprise, then, that it's an exceptionally obscene burlesque of the honky-tonk badass ideal. But perhaps the ultimate twist is that his music is actually more authentic than most popular country right now. It twangs, swaggers and stomps like classic '70s gold, only as imagined by your dirty-ass brother. And opener Birdcloud – yet another interesting product of Nashville's virile underbelly – could prove even more uproarious with a more female punk take on the same delicious Southern profanity. Together, it's one big twofer of wicked subversion that's the stuff of cult legend. – Bao Le-Huu

Wednesday, 21
Are You Bourbon Curious? A Tasting and Talk With Fred Minnick
LITERARY

If your knowledge of bourbon begins and ends at Wild Turkey, you've got a lot to learn. Have no fear; Fred Minnick, author of Bourbon Curious: A Simple Tasting Guide for the Savvy Drinker, is here to educate you on the flavors and nuances of whiskey and rye's sweeter sister. Learning is so much more pleasant when you're simultaneously eating and drinking, and this event at Thornton Park's Soco restaurant has got you covered there, too: The price of your ticket includes four flights of bourbon, various small bites from Soco's menu, and a copy of Bourbon Curious signed by the author. Just don't ask anyone whether Jack Daniel's "Tennessee whiskey" is really bourbon or the discussion may get heated. – Jessica Bryce Young

There's something about Cirque du Soleil that makes some people admit to liking it only in hushed, conspiratorial tones. Maybe it's because the over-the-top whimsy of the French-Canadian troupe of acrobats, dancers and daredevils strikes American audiences as something inherently strange and foreign. Or, as Patton Oswalt once described it, "Everything in Cirque du Soleil is wet and French and gay and on fire at the same time." Oswalt wasn't using that description pejoratively, but as evidence that Cirque du Soleil unites audiences of disparate cultural and political bents. Ovo, the show invading the Amway Center this weekend, continues the tradition of merging dance, acrobatics and trapeze artists with a dose of absurdism and visual flair. Set in the insect kingdom, Ovo showcases tumbling ants, a contortionist dragonfly and a slack-line spider in jaw-dropping vignettes set to Brazilian music. Also, all of this has something to do with an egg. Even though things like a cohesive plot may be swept to the wayside, the sheer spectacle and pageantry of the show wins audiences over every time. – Thaddeus McCollum

The word rhinoceros means "nose horn" – a cute and literal name for an animal weighing thousands of pounds. Unfortunately, the fact that poachers kill for that "nose horn" has caused three of the five species of rhino to be put on the endangered list, and the other two to be threatened. Saving the rhinos is the driving factor behind the Horns and Heroes Project, an art show and auction that aims to both celebrate the large herbivores, and educate the public on the threats that they face. The project also aims to help the artists who participate become conservationists. Those who buy art at the auction will get – along with the art, of course – the knowledge that they helped conservation efforts in Africa and Asia, as all of the profits will be donated. – Martina Smith

Although Nicholas Payton's best-known (and earliest) records tend to reside in the more accessible corners of modern jazz, the New Orleans-based trumpeter has produced a body of work that, as it has evolved, has grown more and more daring, challenging both the idea of what "jazz" means in the 21st century and the idea of what "jazz musician" means. His recent works – starting with the electric funk tapestries of 2004's Sonic Trance and 2011's provocative and conceptual Bitches (on which he played all the instruments) right through 2014's ethereal, nearly solo-free Numbers and the electronic ambience of this year's Textures – show a musician as restless, curious and peripatetic as his idol, Miles Davis. Hell, Payton refuses to even call his music "jazz," preferring to classify it as Black American Music, a definition that he eruditely and expansively pronounces upon as both a scholar (he teaches at Tulane) and in his consistently provocative and engaging live performances. – Jason Ferguson

It is said that music is a universal language, and that’s the principle that OneBeat was founded on. Something of a musical exchange-student program, the organization brings young musicians from all over the world to the U.S. together for a month each year to collaborate on music. Started in 2012, OneBeat hopes to celebrate the ways that the arts can impact local and global communities, as well as help people connect across cultures through music. For the artists involved, it is a musical journey of diversity and learning new ways of thinking, both about music and about others. For those who watch them on the tour that takes place after their monthlong residency, it is a trip around the world through sound. This is the fifth year that OneBeat has done the program, with musicians from over 15 different countries performing, including a sound artist from Taiwan, a tiple (sort of a 12-stringed guitar) player from Colombia, a pianist from Russia and many more. – MS

Saturday, 24
The Return of the Lost Boys
EVENTS 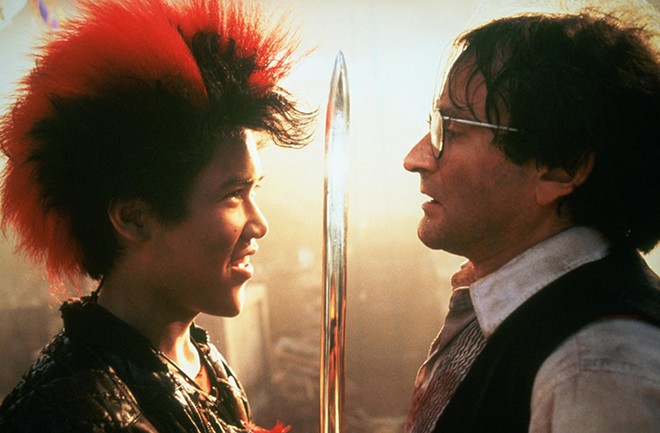 It's been 25 years since Dante Basco donned a black-and-red mohawk for his iconic performance as Rufio in Hook, and '90s-kid nostalgia makes him a welcome presence at this week's themed anniversary party for the film. Upon rewatching our childhood favorite, we realized that the movie is a little stranger than we remembered. We're not doctors, but we've read plenty of Psychology Today articles, and this flick has more crazies in it than the Florida Legislature. Peter Pan's negligent mother is so busy discussing his future at Oxford that she doesn't notice his baby carriage rolling down a hill away from her forever. Captain Hook uses revenge kidnapping to cope with the decades-old trauma of losing his hand to an alligator. And Hook's conversations with Peter's son, Jack, read like a how-to manual for giving someone Stockholm Syndrome. Amidst the psychological wreckage, Rufio is one of the few characters who exhibits any ability to problem-solve, resolve conflicts and lead a group without resorting to torture tactics, which is probably why he doesn't make it to the end of the film alive. It's a huge testament to Basco's acting and screen presence that out of all the major movie stars in Hook's cast, his character is the one people are still chanting for after all these years. And according to his social media accounts, he's more than happy to relive the film's heyday with willing fans. Proceeds from the party go to St. Jude Children's Hospital. – Abby Stassen

Schoolboy Q is off the Percocet and Xanax now, but two and a half years ago, the acclaimed artist told Hot 97's Angie Martinez – provider of some of the most intimate rap interviews of the past decade – that he's still into "lean." For the uninitiated, lean's dozy effects rely mostly on prescription-strength cough syrup, and the active ingredient breeds the kind of euphoric inactivity that has inspired mumbled verses from pretty much everyone. Thankfully for his fans – but mostly for him – Quincy Hanley's Blank Face LP shows no symptoms of drowsiness. The German-born 29-year-old's sophomore major label effort combines heavy hitters like Yeezy with feature darlings Miguel and SZA for a gangsta-meets-experimental sound that will in 10 years be "stereotypically 2016." For now, it's welcome, and we're interested in how it'll hit from onstage. – Adam Manno