Selections: Our picks of the week's best events, April 27 - May 3 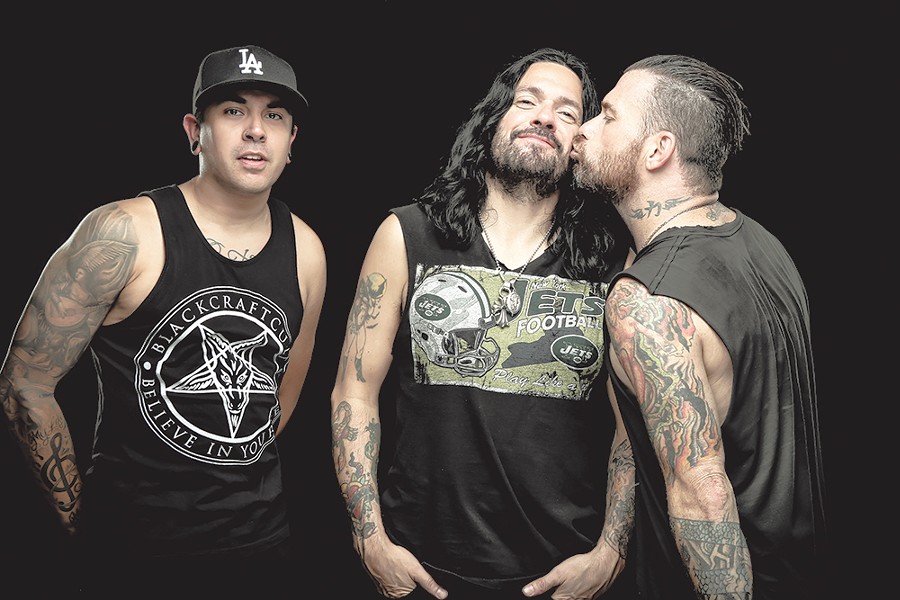 Though Spacebar's Wednesday night comedy show features top local talent on the regular, they've also become the No. 1 booker for underground out-of-town comedy over the past year or so. Comics who are not quite big enough for the Improv feature at Spacebar on a regular basis, and tonight's show brings the return of Atlanta/L.A.'s Dave Stone, who last played there in November 2015. Stone's résumé is top-notch, with appearances on The Late Late Show With Craig Ferguson, Last Comic Standing, Squidbillies and LA Weekly's 2012 "12 Comics to Watch" list. Joining him for this tour are Ryan Singer, a frequent guest on Marc Maron's "WTF" podcast, and Andy Sandford, who has appeared on Conan and Aqua Teen Hunger Force. The three comedians are all very strong performers and poised to break big in the next few years. Catch them on this tri-headed tour for bragging rights a little further down the line. – Thaddeus McCollum

Funk may be the wrong musical style to evoke in an item about string quartet Brooklyn Rider, but we can't stop hearing Sly and the Family Stone as we think about this show. "It's a family affair," all right; brothers Colin and Eric Jacobsen (violinist and cellist, respectively) have formed the backbone of the ensemble since its formation 10 years ago. (Violinist Johnny Gandelsman and violist Nicholas Cords lock in to complete the quad laser.) And also performing at this show is esteemed folk vocalist Aoife O'Donovan – who happens to be Eric Jacobsen's fiancée. Last year, however, the Orlando Philharmonic tapped Eric Jacobsen as its new music director, and Orlando's gain is Brooklyn's loss – this will be his last performance with the group, as touring and recording conflict with his new duties leading the orchestra. But it's not all gloom and finality, especially since this adventurous performance will be in the relatively relaxed environs of the Plaza Live, not the Dead Bob. Brooklyn Rider has always been as comfortable on a South by Southwest stage as a Lincoln Center concert hall – in 2010, Vice compared Brooklyn Rider to "motocross daredevils who never screw up a stunt." Let's help our town's new maestro stick the landing. – Jessica Bryce Young

Most people tend to remember their most cringe-worthy moments in the middle of a hot shower or as they lay their heads down at night. That harrowing feeling is only soothed by the realization that this is all taking place in the solitude of their own mind. But for some, comfort comes from getting up in front of strangers and reading intimate excerpts from their old diaries rather than dwelling on it alone. At Orlando Cringe, normal people share all their sad, weird, funny and dramatic moments of yesteryear – a refreshing experience for those of us who thought we might have to change our name because of all the embarrassing things we've done. This Wednesday, a Cringer will go back in time to when they were 15 years old and renouncing the Lord for an unrequited love. Yeah, you're gonna need a few of their special cocktails to deal with that much cringe. – Marissa Mahoney

No, you haven't heard of the Con Turner Von Simmons Band before, mostly because they've never played before. But you have heard the bands that this local supergroup is formed from: Shak Nasti, Leisure Chief, Brown Note, Gargamel, Kow, God's Personal Stash and more. Tim Turner, Matt Lapham, Derek Engstrom and Jorge Colon Jr. team up for a night of musical mastery, paying tribute to their diverse influences, like David Bowie, Frank Zappa, Steely Dan and Pavement. Colon's Con Leche project starts the night off with some Afro-Cuban jazz to get the ball rolling. – Thaddeus McCollum

Orlando noise-rock band the Glorious Rebellion keeps the heat on the street with fairly regular area performances, often appearing alongside heavy-hitting touring names like KEN Mode, Holly Hunt, Black Tusk, Black Cobra and Jucifer. Even with all that, though, little prepared us for the bare-knuckle impact of their raging new record. Euphoric – TGR's first extended player and only release since their debut 7-inch in 2014 – is a major-league leap for the band. Merging thuggish rock in the septic vein of bands like Unsane, Whores and Helmet with a greasy, bluesy Southern groove, this ax-grinding recording is a big, misanthropic beast and easily the nastiest to come out of the city this year. To make the release event a bruiser for the books, the band of honor has called on a strong supporting gang of homegrown muscle that notably includes stars like doom-sludge lords Hollow Leg and blistering metal punks Moat Cobra. It's gonna get scuzzy. – Bao Le-Huu

Viva la salsa! Heat things up this Uno de Mayo at the first ever Florida Salsa Fest in Thornton Park, where hot and spicy sauces reign supreme. Sway to salsa music, shake it with fiery salsa dancers and sample all-you-can-eat salsa tastings from more than 30 home cooks and professional chefs. Plus, with the Corona and tequila flowing, it's the perfect way to ramp up to Thursday's sizzling Cinco celebrations. We're taking over Eola Drive between Pine and Mariposa streets, so plan on parking elsewhere. If all that salsa doesn't warm your insides, this might: This block party also benefits the Barber Fund, which helps men, women and children battling various cancers. – Deanna Ferrante

When the earth was still flat and the clouds made of fire, there was a stylish punk rocker by the name of Hedwig. Her life, chronicled in the hit musical Hedwig and the Angry Inch, is a tragic tale of sacrifice and communism, of love and loss, of surgery and a very angry inch. With the help of Orlando theater veteran David Lee and friends, the Abbey hosts a night of her poetic tracks – which were totally stolen by Tommy Gnosis – while also doubling as a(nother) benefit for the cancer patient-assisting Barber Fund. This isn't the first time that Lee's brought the Eastern European diva to the Orlando stage, having done so back in 2002, marking the first time the show made it to Central Florida. It's not a full production this time around, more of a spliced-together cabaret of sorts, but it's just enough to satiate this wicked little town. – Kim Slichter

Almost exactly 26 years ago, Prong released one of the most tightly wound, surgically effective, gloriously brutal thrash albums ever made. That Beg to Differ came at the tail end of the Golden Age of Thrash was irrelevant, as the New York trio was both closing the book on underground thrash and opening the door to a new wave of "urban metal" that took the unrelenting power of '80s metal and fused it with a darker, more modern approach. Guitarist Tommy Victor has been the only constant member throughout the band's 30-year history (spending some of the band's occasional off-years as Danzig's guitarist), and while he continues to evolve Prong's sound, the starkly percussive riffs and proto-industrial doominess of Beg to Differ still dominate the band's approach today. – Jason Ferguson