Selections: Our picks of the week's best events, March 9-15 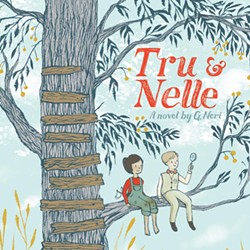 Wednesday, 9
Tru and Nelle
[LITERARY] Join award-winning Tampa author Greg Neri as he introduces his new book, Tru and Nelle, a work of fiction based off the very real friendship between Truman Capote and Harper Lee. Although they grew up to be some of the South's most famous writers, the two started out as unlikely childhood friends in a backwater Alabama town. Lee found inspiration in their relationship, using their time together as the basis for her novel To Kill a Mockingbird. The two fell out when Capote refused to credit Lee when she helped him write the book that made his career, In Cold Blood. But with Lee's recent death, and Capote's back in '84, Neri's book provides a reconciliation of sorts for these wordsmiths, one fans of both authors can use to connect with their spunky, Southern spirit once again. – Deanna Ferrante

Wednesday, 9
Mac Sabbath
[MUSIC] For a genre with fans that are outspoken about their concern for authenticity, there sure are a lot of metal bands with gimmicks. Whether it's Hatebeak's use of an African grey parrot vocalist or Gwar's ... just everything about Gwar, really – everyone loves a gimmick. In fact, one of the only other arenas that relies so heavily on gimmickry is fast food (we love the Quesalupa too, but you see our point). Enter Mac Sabbath, assimilating the cartoon funhouse marketing scheme of McDonald's McDonaldland characters and combining it with lyric-swapped covers of Black Sabbath songs ("Iron Man" becomes "Frying Pan," "Paranoid" becomes "Pair-a-buns"). While there's about as much substance to their shows as there is nutritional value in an Extra Value Meal, you can't deny the appeal of a live show that features a nightmare version of Ronald McDonald fronting a band composed of Grimace, Mayor McCheese and the Hamburglar. It's just as unhealthily satisfying as that first bite into a fresh cheeseburger. – Thaddeus McCollum

Thursday, 10
Orlando Mixtape Vol. 4: British Invasion
[MUSIC/PHILANTHROPY] After technical difficulties ruined Adele's performance at the Grammys, it left us itching for a good rendition of "All I Ask" sans impromptu mic-drop into the piano. You can ask for the soulful diva's tunes and other musical hits from across the pond at this week's Orlando Mixtape Volume 4: British Invasion event, when Giti Khalsa of Seven Mary Three and other Orlando musicians take the stage at the Social to play songs from the Sex Pistols, Queen, David Bowie and the Beatles at your request, sort of like a live personal playlist. The event benefits Urban Think Foundation, and at Orlando Mixtape Volume 3 (the one with a Southern rock theme), the group says it raised nearly $20,000 for literacy programs. For some extra $20 bills, you can also sign up for the VIP "Never Mind the Bollocks" cocktail tour, featuring the Woods, the Courtesy Bar and Olde 64. – Monivette Cordeiro

Thursday, 10
Jim Breuer
[COMEDY] Those who know Jim Breuer from his role as a THC-addled petty criminal in the stoner comedy classic Half Baked or as Goat Boy from his four seasons on Saturday Night Live might be surprised to learn that the role he plays most often in his stand-up is Dad. The rubber-faced comedian is more likely to split your sides with stories about marriage and parenting than with weed humor nowadays, but don't think that means dad jokes. His trademark physicality and knack for voice work elevate anecdotes about domesticity to something a little more subversive. – Thaddeus McCollum

Thursday, 10
Space Is the Place
[ART] In such a short time – we previewed their opening just seven months ago – Time Waste Management's A Place Gallery has become Orlando's go-to for challenging local art. This three-night-only show brings together the scratchy, scatological pop-culture illustrations of Maressa Roberts (aka Em's Revenge) with projection mapping by David J. Lajas (aka Catalyst). Catalyst's galactic overlays bring an otherworldly aspect to the twisted societal commentary of Em's Revenge, taking it all to a level even Sun Ra himself might approve of. – Jessica Bryce Young

Friday, 11
Coheed and Cambria
[MUSIC] When Coheed and Cambria plays a live show, you expect them to be standing at the apex of a mountain with lava explosions and lightning strikes following their every guitar lick. However, with the release of 2015's The Color Before the Sun, Coheed took a break from writing about the mythical Kilgannon family and their plight against Supreme Tri-Mage Wilhelm Ryan to get a little more personal. "For me, becoming a father was so important, and at this stage in my life, I felt confident enough to write about these things without the concept in front of it," frontmane (pun intended) Claudio Sanchez said in an interview with Billboard. The maxim "If it ain't broke, don't fix it" clearly isn't holding Coheed back; see the band re-establish itself at Hard Rock Live tonight. – Marissa Mahoney

Friday, 11
Dosti Music Project
[MUSIC] The New York-based music collective Found Sound Nation has a simple, but by no means small, mission: to unite people across borders through the making of music. The borders that separate us all can be national, ethnic, gender-based or tradition-based – but FSN, through various innovative initiatives, seeks always to open eyes and ears, not by eradicating differences but by exposing and combining different talents into something new, rich and strange. Their Dosti Music Project, a partnership between Found Sound Nation and the U.S. Embassy in Islamabad, returned to Central Florida recently for a second stay at the Atlantic Center for the Arts, where 10 musicians from three countries (India, Pakistan and the United States) and many different practices (from traditional Sufi singing to electronic beatmaking to avant-garde jazz) have come together for three weeks of cross-cultural collaboration. What they create in their residency, they'll perform on a 10-day mini-tour from here to Nashville, transcending political and cultural divides while crossing geographical boundaries. – JBY

Saturday, 12
Googoosh
[MUSIC] This is a big deal, y'all. Googoosh is one of those titanic stars of non-Western music that typically plays huge concerts to adoring fans in global, cosmopolitan cities, and here she is performing in Orlando. And not only is this the only Florida date on her current tour, it's one of only five U.S. dates. Her decades-spanning career as one of Iran's most popular singers has made her adored throughout the Middle East and larger Iranian disapora. Interestingly, despite being a symbol of everything the Revolution sought to overturn – modernization, Westernization – Googoosh remained in Iran for years afterward, not performing at all until she began to tour outside the country in the early 2000s. Since then, she's used her massive international audience to advocate for the plight of Iranian exiles and the LGBT community in Iran and for some moderation between the puritanism of the Revolution and the realities of the modern world. On top of all that, her voice is still a thing of incredible power. This is, in all likelihood, the only opportunity you'll ever have to see her – she only plays a dozen or so concerts a year, and this will be the first time she's performed in Florida since 2007. – Jason Ferguson

Saturday, 12
Afternoon With Albert
[ART] This could very well end up being the only metal show in your life that lacks moshing or an influx of obnoxious crowd surfers: a chance to walk around the Mennello Museum of American Art with famed metal sculptor Albert Paley as he leads you through his Forged Works exhibition. Size matters as Paley takes you outside the museum and into the sculpture garden to show off the significantly larger (and officially permanent) part of the collection: "Interlace" and "Star," both of which are dedicated to the museum's co-founder, Marilyn Logsdon Mennello. Enjoy unparalleled insight into the various pieces, and take pleasure in the fact that the only thing your wallet will be needed for is to purchase a signature Hanson's Shoe Repair cocktail to sip during your stroll. – Kim Slichter