Selections: Our picks of the week's best events, Sept. 14-20

It's been just over a year since Speakeasy, Orlando's oldest literary open mic, closed up shop for good. And while host Tod Caviness hasn't really given us a chance to miss him, what with his monthly Loose Lips reading series over at Lil Indies, we do find ourselves missing the hodgepodge of poetry, prose, comedy and performance art that tended to devolve into a boozy good time at Speakeasy. While we can't say who will definitely be reading at this reunion since it still runs on night-of sign-ups, we'd be surprised if some of the little literary birds who flew away from Speakeasy to set up their own nests in other parts of the city – like the Gallery at Avalon Island or the Milk Bar – didn't swoop in for a beer and a chance to read in front of old friends. – Thaddeus McCollum

In the days after the massacre at the gay nightclub Pulse, local art shop Sam Flax announced it would donate supplies to artists who wanted to create works of art responding to the tragedy. The store only asked that participants would turn in the artwork created with the supplies to put them on display. The results of the project were nearly 300 unique, moving pieces that form the Paint Strong Orlando collection. Some of the artwork will remain on display through October before traveling to other venues and eventually being auctioned off to benefit the survivors of the mass shooting and the families of the 49 people who died. "It is a great honor to be a part of this creative, moving project," says Sam Flax, general manager of the store. "The collection has already had an impact on the families and friends who lost loved ones in the Pulse tragedy. The pieces are simply amazing, but the show is more than just the sum of its parts. It is the voice of the people of Orlando." – Monivette Cordeiro

Can you imagine driving through town only to see an impromptu jazz performance, an outdoor fitness space, or an urban farm where cars are normally parked bumper to bumper? As part of World Parking Day, a local group called Parking Day Orlando helps convert the city's parking spots into interactive experiences. One day a year, this group focuses on transforming these spaces into mini-parks or hangouts that will leave you wanting to linger. Last year, the group focused on the area around Lake Eola. This year's event will station new "parklets" along seven blocks of Edgewater Drive, in the busy part of College Park. Expect designers of these pop-up parks to be working on their design throughout the morning. Make sure to stop, watch the construction, and then explore the finished products later in the afternoon. – Aileen Perilla

One of the best shows of Orlando Fringe 2016 was Paint Chips, based on Ken Nordine's spoken-word classic, Colors. Local dance troupe Voci choreographed dozens of Nordine's short odes to various colors, preserving the cool, jazzy wit of the originals and bringing to it their own exuberance. Nordine's word-jazz portraits, originally recorded in 1966 as radio ads for a paint company, are brought to life with synesthetic glee by Voci's dancers, who embody 20 different hues including bossy Green, gossipy Magenta, frustrated Chartreuse and complicated Flesh. Watching Adrienne Nichols, as Blue, go from a navy funk to a sky-high gaiety sets the, ahem, tone for the show. Go experience the rainbow – highly recommended if you missed it the first time around. (Dance lovers with offspring may want to aim for the family-friendly Sunday matinee, which is padded with art activities for the kiddies.) – Jessica Bryce Young

Find your hangover havens all in one place as Orlando Weekly hosts this Ron Swanson-style, booze-filled event full of unlimited drinks and brunch tastings from local restaurants. Just like our last brunch event, it's held in the Orchid Garden at Church Street Station, so you can wander over to Lake Eola afterward and walk off all those mimosas and pancakes you just couldn't resist. Enjoy live entertainment while you sample brunchy dishes from restaurants like Carmel Kitchen, Baoery, Nova and Outpost Neighborhood Kitchen. Finally: a brunch your whole squad can agree on. – Marimar Toledo

Breakbeats and deep bass are the trademarks of Orlando native DJ Icey, who takes over Gilt Nightclub this Saturday, hot off the release of his latest single, "Got a Lot." Scott Kirkland of the Grammy-nominated Crystal Method is in tow, playing many of the electronic beats that the duo has been known for for the past 20 years. Kirkland and Icey offer five hours of old-school electronic dance music (don't call it EDM) to anyone who wants to jump, head-nod or shuffle to the bass drop. – Martina Smith

As part of the Plaza Live's new and very catholic booking policy – Henry Rollins, Trailer Park Boys, Keb' Mo', Kenny G. anyone? – the venue is hosting young and heavily buzzed-about Toronto MC Tory Lanez. Lanez is a versatile vocal stylist: a grimy rapper where needed, and ready to let loose a high lonesome falsetto when called for, all artfully intersecting over gigantic, state-of-the-radio art productions. New album I Told You is Lanez' most ambitious undertaking yet, a cinematic sonic biopic concept album, chronicling his own journey from rough beginnings to musical self-sufficiency. And beyond. Also, for the last time, Lanez is not, in fact, related to Drake. – Matthew Moyer

Triple threat Meghan Trainor (singer/songwriter/producer) has become a bona fide pop sensation on her own terms, all by dint of her own hard work and performance savvy. Although a struggle with vocal cord hemorrhages in 2015 nearly stopped her promising young career dead in its tracks, Trainor soldiered through. Her music is an ebullient mix of modern pop and R&B tropes with Trainor’s distinctive purr riding shotgun. – Matthew Moyer 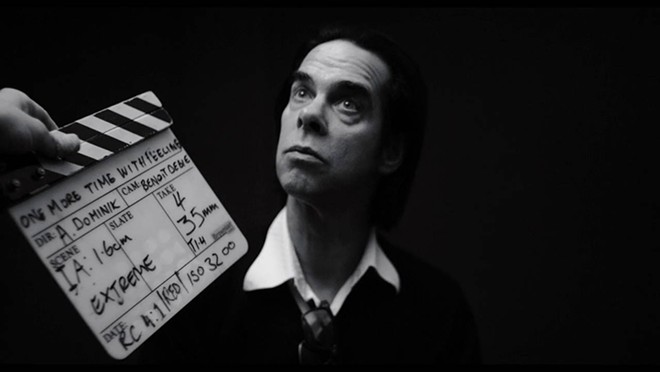 A rather unintentional sequel to 20,000 Days on Earth, the fictionalized Nick Cave biopic, One More Time With Feeling starts out as a modern version of the Beatles' Let It Be, a candid peek behind the curtain into the creative process of the vampiric Cave and his Bad Seeds as they worked on the songs that would become their new album, Skeleton Tree. So what starts as free-flowing conversations with Cave about the nature of creativity and collaboration (especially his telepathy with ever-present foil, violinist Warren Ellis) mixed with performance footage, shifts into a more raw and painful zone with the emotional atom bomb that was the tragic and accidental death of Cave's son in 2015. Even for the casual viewer, the topic stings – we challenge you not to get teary-eyed when recalling that scene from 20,000 Days of Cave playfully eating pizza and watching Scarface with his sons – and the music takes on an altogether new dimension of sadness, longing and even urgency. Filmed in moody black and white, this is a pitch-perfect encapsulation of Nick Cave, the artist, the musician, the writer and, ironically, if you've ever watched even one second of Birthday Party live footage, the survivor. – MM