Florida Senate approves the largest Florida highway expansion in 60 years. Environmentalists say it would be devastating

Last week, the Florida Senate approved plans to build a new statewide network of toll roads, teeing up the latest battle between conservationists and state lawmakers.

The project is the brainchild of state Senate President Bill Galvano, R-Bradenton, who, despite a flummoxed reaction among environmentalists and with very little legislative discussion on the issue, set up a vote on the proposal – SB 7068 – last Tuesday. By then the bill had already been heard in one Florida House committee, and was then sent straight to the House floor for a vote following the Senate's 37-1 approval. State Sen. Jose Javier Rodriguez, D-Miami, was the only state senator to vote against it.

The proposal consists of three toll roads: an extension of the Suncoast Parkway from the Tampa Bay area north of the Georgia border; an extension of the Florida Turnpike west to connect with the Suncoast Parkway; and the construction of a new transportation corridor, including a toll road that will stretch from Polk County to Collier County. It calls for spending $45 million next fiscal year, with that amount ballooning to $90 million in the 2020-2021 fiscal year, to roughly $135 million the following year, and then a recurring amount of $140 million starting in the 2022-2023 fiscal year.

Much of the land proposed for development is within Taylor County, and most of it is owned by Florida's richest man, Thomas Peterffy, who's worth an estimated $18.5 billion, per Forbes. During the 2018 election cycle, Peterffy donated $310,000 to Gov. Ron DeSantis' campaign.

The left-leaning advocacy group Progress Florida dubbed the project the "Billionaire Boulevard," lamenting it as a political payback for major landowners and development interests and describing it as "one of the biggest land grabs in decades, threatening large swaths of natural Florida in the process" in a petition drive earlier this month.

In 2017, Florida Trend called the stretch of land "the largest continuous piece of undeveloped property in private hands east of the Mississippi River."

Galvano claims the proposal – which is almost sure to pass in the House – will address Florida's growth and need for added infrastructure, provide new hurricane-evacuation options, expand bicycle and pedestrian trails, lay the groundwork for new water and sewer lines, and provide added access to broadband internet in rural areas.

"Recent estimates tell us Florida is gaining over 850 people a day, or a population the size of the city of Orlando every year. We need to be ready," says Galvano. "I am confident these new infrastructure corridors will help achieve Florida's goal of strategically planning for future population growth, while at the same time revitalizing rural communities and enhancing public safety.

In speaking to the Senate, state Sen. Tom Lee, R-Thonotosassa, who's carrying the bill for Galvano, called the proposal a "bold endeavor." But he also acknowledged "legitimate concerns about economic, human and community impacts that go along with alignment." He claimed everyone with concerns would have "a seat at the table."

This, of course, was a response to environmentalists' swift condemnation of the proposal.

In fact, Galvano's potential project is opposed by almost every environmental organization across the state with the exception of Audubon Florida, whose director of advocacy, Charles Lee, did not return Orlando Weekly's request for comment.

Still, it's not a sure thing, state Sen. Linda Stewart, D-Orlando, stresses to Orlando Weekly. She says the proposal is merely a study commission for now.

"Let's just make that clear," Stewart says. "This is not a done deal."

"I was not going to vote for it, but I put five amendments on there that allowed the environmental community to have a seat at the table and be able to be involved with the configuration of roads that might be considered," Stewart continues. 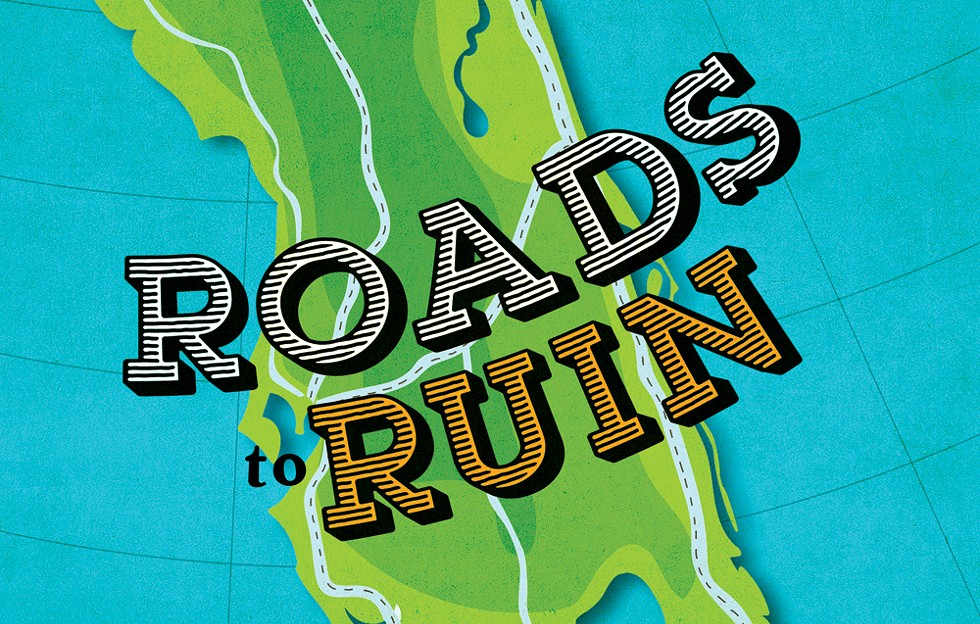 Had it not been for her vote in favor of the proposal, Stewart says, she wouldn't have been able to include the amendments she tacked on, in which environmental groups including the Nature Conservancy, the Sierra Club and the 1000 Friends of Florida, among others, would be included as members of the task force.

Prior to Stewart's amendments, though, those groups took issue with the proposal. At a press conference on Earth Day, Frank Jackalone, Florida director of the Sierra Club, said that his group would "declare war" on lawmakers who support SB 7068.

"It's unfortunate and ironic that at the same time the Legislature is planning to invest hundreds of millions of dollars in programs and projects to restore the state's impaired waterways, it's on the verge of approving three new highways that would splice through landscapes with fragile rivers, natural springs, wetlands and aquifer recharge areas," said Paul Owens, president of 1000 Friends of Florida, at the same press conference last week, the day before the state Senate would take up the proposal.

Florida lawmakers know this. Though there's debate over the main driver of the Sunshine State's recurring toxic algae and red tide crises, most lawmakers understand that road runoff and sewer drainage are major contributors. Most citizens are aware, too, and many have voiced how repulsive they find the continuing urban sprawl.

Given these factors, why would lawmakers still opt to move forward with the project?

It's a question that stumps Valerie Anderson, an environmental activist and the director of communications and programming at the Florida Native Plant Society.

"This is a completely rural area that is mostly free from strip malls and other things that disrupt wildlife corridors and encourage sprawling development," Anderson says. "There's no demonstrated need for these roads. It was said that they have to do a hurricane evacuation route, but that is not demonstrably true."

[A digression on the topic of hurricane evacuation routes:

With the steadily rising threat of climate change, as state Sen. Stewart also points out to Orlando Weekly, Florida may need more than Interstate 75 and existing routes to evacuate a large portion of the state's more than 21 million citizens, if, or when, necessary.

What state lawmakers aren't addressing is how dangerous the process of such a large-scale evacuation actually is.

According to a 2006 study from the University of Texas Health Science Center, when Hurricane Rita hit the Houston metro area and surrounding southeast Texas in 2005, spurring the evacuation of more than 2.5 million people, most of the 111 deaths that occurred were due to an accident during the evacuation process, and not the storm.

The accompanying fiasco that comes with large-scale hurricane evacuations was part of the reason behind Texas state officials' decision not to evacuate the metro area prior to Hurricane Harvey in 2017, which claimed 68 lives. OK, digression over.]

"And check out the map," Anderson says. "There's no way to thread your way around them unless [the state] built right on top of existing roads."