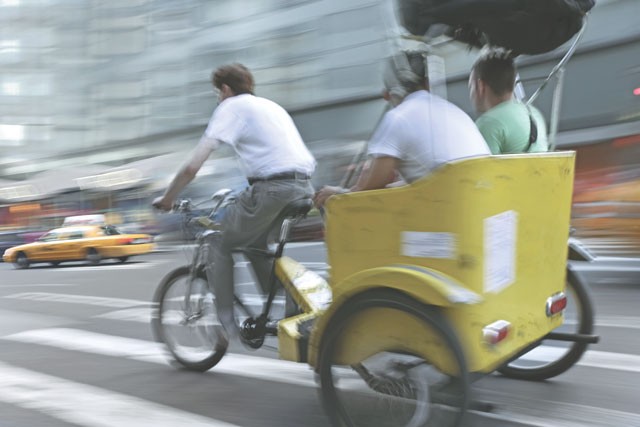 When you take a ride in a pedicab on International Drive, are you taking your life into your hands? A lack of regulation of non-motorized vehicles for hire – those ubiquitous bicycle-powered carts also known as pedicabs – in unincorporated Orange County has some business owners and county officials worried that you might be.

"When you're putting people in an unregulated open-air vehicle, there's no doubt the consumer is in danger," says newly elected Orange County Tax Collector Scott Randolph. "Tourists presume the government is protecting them."

Since 2007, the Florida Highway Patrol has recorded 2,291 crashes involving bicycles in Orange County ­– 512 were recorded in 2012 alone. Though crashes are not categorized by whether they involved pedicabs, the Orange County Sheriff's Office did report at least one recent instance in which an unregulated pedicab injured an attendee at the Orange County Convention Center. The pedicab driver fled the scene of the accident.

In 2007, the city of Orlando enacted an ordinance regulating non-motorized vehicles, requiring pedicab drivers to obtain a permit, businesses to obtain $500,000 liability insurance and vehicles to undergo safety inspections. According to Orange County officials, at least 50 individuals consequently moved their operations outside city limits and into unincorporated areas of Orange County – specifically International Drive and the adjoining tourist areas.

That's because, unlike the downtown district, Orange County does not regulate non-motorized vehicles. Individuals and businesses wishing to operate a non-motorized vehicle in the county are only required to file a local business tax receipt, which is issued by the Orange County Tax Collector's Office and allows a business to operate at a specific address or property.

According to Orange County Tax Collector records, a total of 69 drivers and six companies have filed business tax receipts to operate pedicabs on I-Drive. The law does not require these drivers to carry insurance, and they are allowed to operate without governmental oversight.

The Orange County Convention Center is the only entity regulating pedicabs in the I-Drive area. To operate on convention center property, pedicab drivers must undergo background checks carried out by the Orange County Sheriff's Office, have a valid state-issued driver's license and provide the center with a copy of the business' or individual's insurance policy. But not all pedicab drivers are operating at the convention center; those who don't do not have to do any of the above.

The Sheriff's Office uses state bicycle laws to deal with unregulated pedicab operators. And in 2009 the Orange County Board of County Commissioners amended the Orange County Code to remove criminal penalties for anyone operating a business without a local business tax receipt.

If the operator refuses to produce a tax receipt, or simply drives off when asked for one, authorities have no legal authority to pursue them or force them to produce the receipt.

"We have staff members who go out every day to make sure businesses have their receipts," Randolph says. "After that, all we can do is issue a citation. I'm not sure we have the statutory authority to regulate whether businesses have insurance. Our job is to simply collect the taxes and enforce the business tax receipts."

Owner of I-Drive's Redi Pedi Cab Co. and veteran pedicab driver Catherine Ojeda is fed up with footing the bill to run a responsible business while riders without insurance poach her customers.

"Uninsured drivers cannot be overlooked," Ojeda says. "Is it right that a pedicabber can ride under the influence? Something has to be done to protect consumers and the businesses that are trying to do what's right."

Ojeda says customers approach her cabs before others because of how presentable and professional her drivers and cabs look.

Independent pedicab operators don't all agree with Ojeda's assessment and think it should be up to the consumer, not the government, to decide with whom they should spend their money. "Like operating any vehicle, some people have insurance and others don't," says independent pedicab driver Marty Keer. "It's just easier for drivers to make money doing it on their own and not having to pay for insurance."

"We will be looking into how we can work with the sheriff's office to create some form of regulations on pedicabs," Randolph says.

Additionally, the Orange County Sheriff's Office has begun discussions with Ojeda and other International Drive business owners about petitioning the Board of County Commissioners to create an ordinance similar to that of the city of Orlando addressing non-motorized vehicles.

Until recently, County District 6 Commissioner Tiffany Moore Russell hadn't heard anything negative about the pedicab business. Now, the issue is on her radar.

"My office is looking into the matter," she says. "I want to create an ordinance that addresses all transportation on International Drive. I will look at a whole list of perspectives when it comes to the transportation we provide guests of our district."

When asked about the timeline for the implementation of such an ordinance, Russell says that after the issue is brought up for open discussion at one of the upcoming board meetings, it generally takes two to four months for the legal department to draft the ordinance language and for a hearing to be held.

"I will, however, draft a memo that will be given to the mayor and each board member so that they are aware I want to address this issue," she says.

Ojeda remains skeptical that anything will happen.

"No one is going to waste time trying to reform the pedicab industry," she says. "Business owners need to realize that in any instance where new ordinances are being put in place or laws are changing, they're not going to get everything they want."