Shut Up and Play the Hits 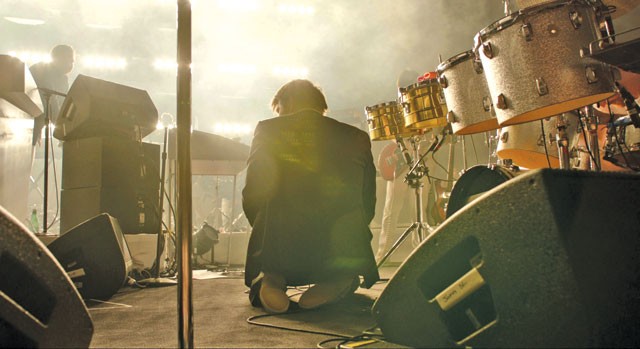 Shut Up and Play the Hits

LCD Soundsystem frontman James Murphy was never the standard model of a rock star. A stocky 32-year-old DJ when the electronic act broke into the quasi-mainstream in 2002, Murphy, along with friends Nancy Whang, Pat Mahoney, Tyler Pope and an assortment of musical interlopers, released three self-written, mostly self-performed albums in seven years before announcing his and the band's retirement last year. Refreshingly stripped of pretense or grander purpose, Murphy told The Colbert Report at the time, "I'm 41. At a certain point, I think [rock stardom] gets embarrassing."

In Shut Up and Play the Hits, showing at Enzian Theater for one night only (11:59 p.m. Wednesday, July 18), directors Will Lovelace and Dylan Southern (with additional camerawork by, among others, Spike Jonze and Lance Bangs) seem to crave the exact lofty meaning behind LCD Soundsystem's Madison Square Garden farewell show that Murphy deliberately left out. Whether lingering on the teary-eyed in the crowd or voyeuristically capturing the one sentimental moment Murphy allows himself, the film is weighed down slightly by its unrequited reverence; it's shot like a love letter to a man with one foot out the door.

Setting that gripe aside, though, Play the Hits flat-out works. From the noise-drenched opening credits to the final, bittersweet song, the concert footage – a DVD of the entire nearly four-hour show is reportedly in the works – pulses with excitement. Passing the exposition along to culture critic Chuck Klosterman in the form of a real-life sit-down interview for The Guardian is a masterful choice, as is the film's studious avoidance of bland bio segments or talking-head contextualizing. What emerges is a portrait of stardom as not a tangible goal but the byproduct of a hobby-turned-full-time-job.

LCD Soundsystem, for all intents and purposes, was simply James Murphy. He played nearly all the instruments on all the records, so what exactly can he retire from? Without even directly posing the question, Shut Up and Play the Hits answers it, anyway: The band was a project that reached completion. James Murphy, on the other hand, is a work in progress.