Silver Linings Playbook proves that high-quality, mainstream entertainment for grown-ups has not yet perished 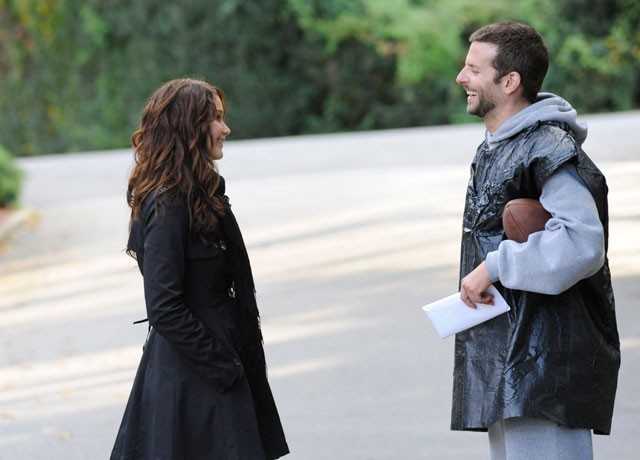 Certain movies are sprinkled with pixie dust, an indescribable concoction that infuses scenes with irresistible magic; Silver Linings Playbook is practically hand-rolled and deep-fried in the stuff.  Graced by award-worthy performances from Bradley Cooper and Jennifer Lawrence, two of the most talented and bankable stars of the moment, this marvelously eccentric romantic comedy demonstrates that smart, high-quality, mainstream entertainment for grown-ups has not yet, and hopefully never will, perish entirely from the earth.

Having stepped in to the big leagues with 2010's Oscar-winning hit The Fighter, the difficult, formerly cultish director David O. Russell has morphed into making accessible, medium-budget prestige picture. He should surely extend his winning streak with this engaging, crowd-pleasing dramedy. Matthew Quick's 2008 novel provides a sturdy backbone for Russell to explore the fractured family dynamics that are the hearty bread and butter of his best work.

Bradley Cooper drives the plot as Pat Solitano, an amiable working stiff who spent eight months in a mental institution after finding his wife in the shower with a colleague. Still struggling with bipolar fits and lingering anger over the incident, Pat is released to the care of his parents.

He moves into the attic of their Philadelphia row house and launches a program of positive thinking and self-improvement designed to win back his estranged bride, a high-school English teacher named Nikki (Brea Bee). He sets about rebuilding his body and mind, jogging everyday in grungy sweats with a garbage bag pulled over them, and reading all the novels on his ex's curriculum, to show her he cares about her work.

Tranquility is hard to come by in this wired, NFL-obsessed household, where superstitious Dad, Pat Sr. (Robert De Niro), lives and dies on every play the Eagles make, in no small part because he's also a small-time bookie with a gambling addiction. Pat seems destined to swirl around this familiar drain until he's set up on an informal dinner-party date with the explosively unbalanced young widow Tiffany (Jennifer Lawrence). She uses sex as coping skill, which once cost her a job, and she has an instant attraction to the equally damaged Pat. These two wounded kooks aggressively tug and push at each other, fighting to resist the innate sense that their mutual craziness is perfectly matched.

While we can pre-visualize the trajectory, it is the clever intricacy of both the script and of the consistently interesting choices made by the actors, that keep the audience guessing.  Russell is famously volatile; his on-set blowouts are the stuff of YouTube legend, but he has a phenomenal touch with actors, and he gets stellar work out of this cast.

Cooper continues to develop his craft beyond just coasting on his movie-star looks, and here lends troubled Pat an innate likeability and openness that diminishes the scarier aspects of his personality. His manic, free-flowing monologues are compelling, and Cooper has the charisma to make Pat's brutal honesty more sweetly vulnerable and funny than obnoxious.

Chris Tucker returns from self-imposed exile for a rare appearance outside of the Rush Hour franchise, and he perfectly modulates his hyperactive shtick to play Pat's perennially escaping asylum buddy. Robert De Niro, having lapsed into a lazy sketch-comedy parody of himself for the last dozen or so years, does some of the best work he's done in ages, and it's a blast to see him enjoying the material for a change. The movie, however, belongs to Lawrence, whose yummy cupcake voluptuousness is nearly unbearable. She is fierce, funny, wounded and wholly irresistible. Hers is an absolute knockout performance -- one that reassures us that her career will endure long past her teen queen Hunger Games phase.

I can already hear the grumbling of certain high-minded grouches that may dismiss Silver Linings as mere entertainment, claiming that beneath a layer of self-conscious hipness it is beholden to the same tired boy-meets-girl formula of a Reese Witherspoon time-killer. Sure, it is a well-used template of genre conventions, but the delivery of those ideas, through the performances, the camera work, and the delightful script, make those old beats seem fresh as a spring breeze. While most movies try to impart a moral, the best of them can discreetly point us toward a better path for our own lives – and just maybe they can inspire us to squeeze every drop of joy we can out of this fucked-up world. There can be no ending happier than that.