Simplicity is the order at Thuyen Vien 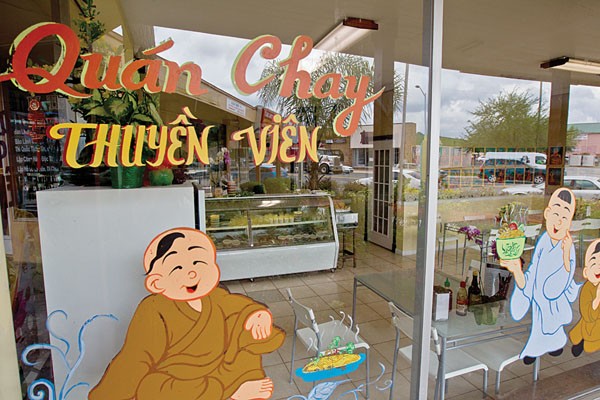 The Phap Vu Temple on Dean Road has been nourishing the souls of Vietnamese Buddhists for years, but it's doing its part to nourish their bellies as well. That's because the temple owns and operates Thuyen Vien, a small vegetarian eatery tucked inside a wee courtyard on the southeast corner of Mills and Colonial. Two young monks, neither of whom speak a lick of English, prepare and serve meals inside the simply adorned, spotlessly clean space. If it weren't for members of the Vietnamese Buddhist community – regular folk with a sense of duty who regularly pop in to lend a hand, be it serving, cleaning, preparing or translating – the language barrier would certainly be an issue, especially for curious and accidental diners. As it stands, there's always someone in the restaurant willing to provide a description, however cursory, of the vegetarian comestibles that beckon from the refrigerated display case.

The first time we visited Thuyen Vien, a young lady waited patiently for bánh bao ($2) – steamed buns akin to Cantonese baozi, a common dim sum item. We made it a point to follow her lead, and added a couple of sesame balls ($1) and Vietnamese sweet bread ($1) to the mix before taking a seat at one of the three tables. We immediately took to the sweet bread – no, it wasn't a tofu-contrived plate of thymus and pancreas, but a bread bun with a sugary mildness to it. Greaseless sesame balls were filled with a yellow bean paste that supplied a subtle sweetness that we also found agreeable.

It felt as though we had started our meals off with dessert, though, so it was good to bite into the fat white bánh bao stuffed with a peppery mix of peas, carrots and cabbage. The chubby buggers were quite filling, so after scanning the concise menu, the spicy rice noodle soup ($5) stood out as a less filling option. As we enjoyed the mint-sprigged broth teeming with tofu and meat analogues, we studied the story of Siddhartha told through multiple images affixed to the wall, and gleaned the story of Thuyen Vien and its association with the local temple from a couple of the friendly volunteers. No question the restaurant nurtures a very placid and carefree spirit, and the people here make every effort to please.

Our next dish – steamed rice with meat and fish facsimiles, embellished with cucumber slices ($5) – was another simple, thoroughly satisfying plate. Nothing extraordinarily fancy, but we gathered that was precisely the point. A cup of coconut jelly ($2) with bits of coconut flesh was enough for dessert.

I also took home a “loaf” of bánh tét ($4), a Vietnamese Lunar New Year favorite featuring glutinous rice rolled in a banana leaf and stuffed with mung beans and mung bean paste. I was about nine months early (or about three months late) in eating it, but I cooked it in the steamer for 20 minutes before taking in its flavor intrigue. Heavy, banana-flavored and beany … 'nuff said.

I found that as far as one of Buddhism's “five desires” was concerned (food), I neither indulged in, nor despised, any of the dishes I consumed. This sort of “middle path,” according to Buddha, is the path to wisdom and a necessary approach to cultivate “the Way.” In complexity, Thuyen Vien's dishes may not be fancy; but in simplicity, they are enlightened.