"In addition to building a more functional corridor, the Florida Department of Transportation wants to build a signature corridor," says David Parks, the public information officer for the Florida Department of Transportation's I-4 Ultimate project. "The DOT wants the drive on I-4 to be just as much of the Florida experience as palm trees, sunshine, the great weather, Mickey Mouse, Harry Potter, all the things that people come to Central Florida for – they want the drive-by to be part of that positive experience."

That's going to take six years of work, frustration and distraction, but Parks says it'll be worth it. 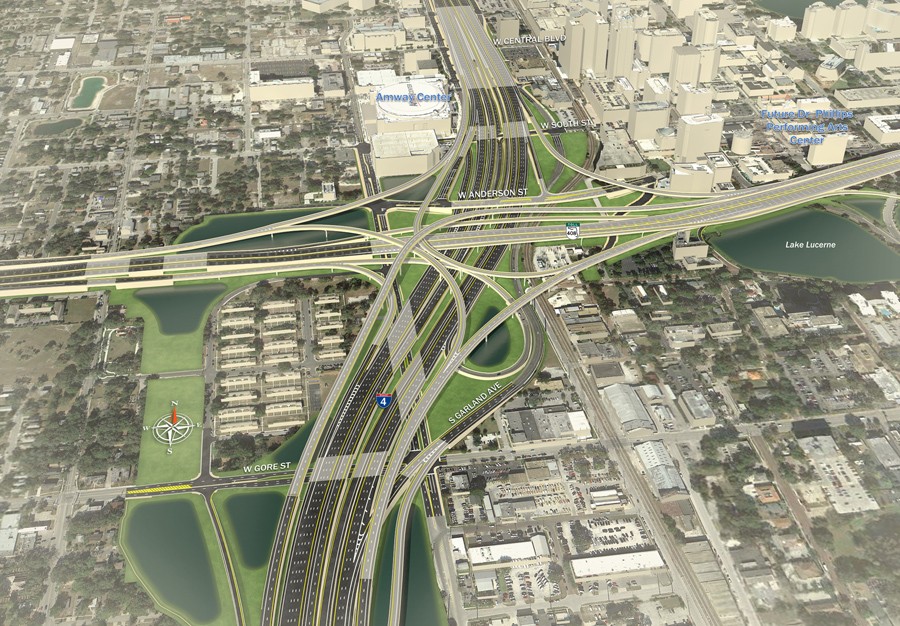 "The idea is that you can provide a reliable travel time in those express lanes by varying or raising or lowering those tolls, and the toll will be priced to maintain 50 miles an hour," Parks says during a 9 a.m. press meeting in Maitland on March 6. Not surprisingly, we were almost late for the meeting (as was one of the project's representatives), given that I-4 is pretty much a parking lot during every hour with the "rush" description.

People gathered at the nondescript Maitland offices to hear about what exactly the I-4 Ultimate project – which will occupy 21 miles of your I-4 commute with road closures and noise for the next 6.5 years – means when it comes to transportation in Central Florida. It should come as no surprise to anyone familiar with the area that there has been a bit of a bidding war over who would get the task of conducting this public-private partnership project, which will ultimately cost $2.3 billion. The project is being paid for through a 40-year public-private partnership that will help finance I-4 Ultimate's design and construction – over the next 40 years, payments will be made to the partnership using various revenue sources, including tolls. The federal government also threw in a $950 million loan. 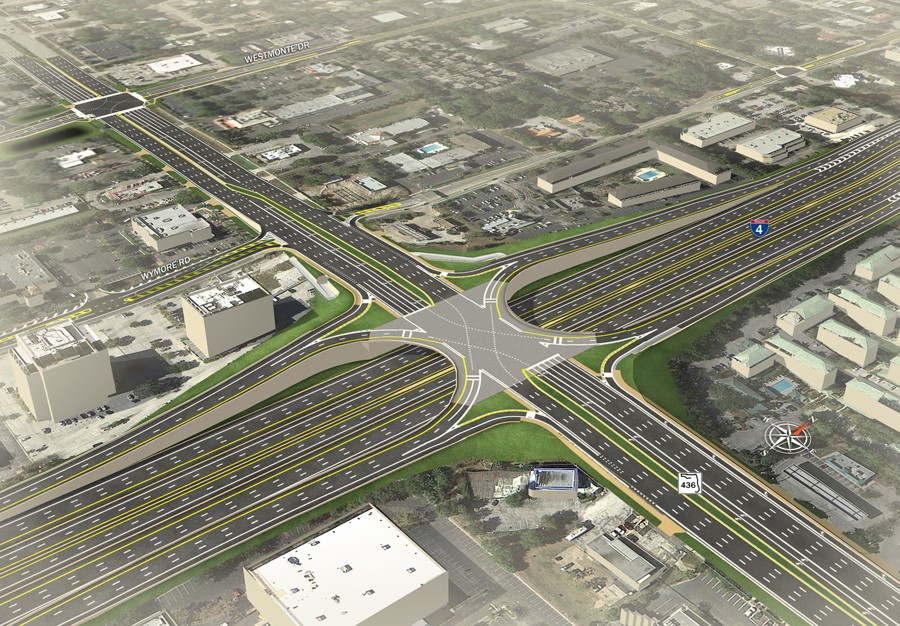 It's a big deal. The project will reconstruct 15 interchanges, rebuild more than 75 bridges, widen roads and raise overpasses – at the meeting, there was discussion of a four-foot elevation of the I-4 lanes with colored lighting at the downtown overpass to reflect events like Orlando City Soccer games (purple!), which will likely hinder parking near the Church Street thoroughfare for some time. And, perhaps most importantly, the project will introduce four new toll lanes to I-4 to help ease congestion during commuting hours.

It's the largest transportation project in Florida ever – and according to the CEO of one of the involved companies, Skansa, it's also the largest public-private partnership in the United States. 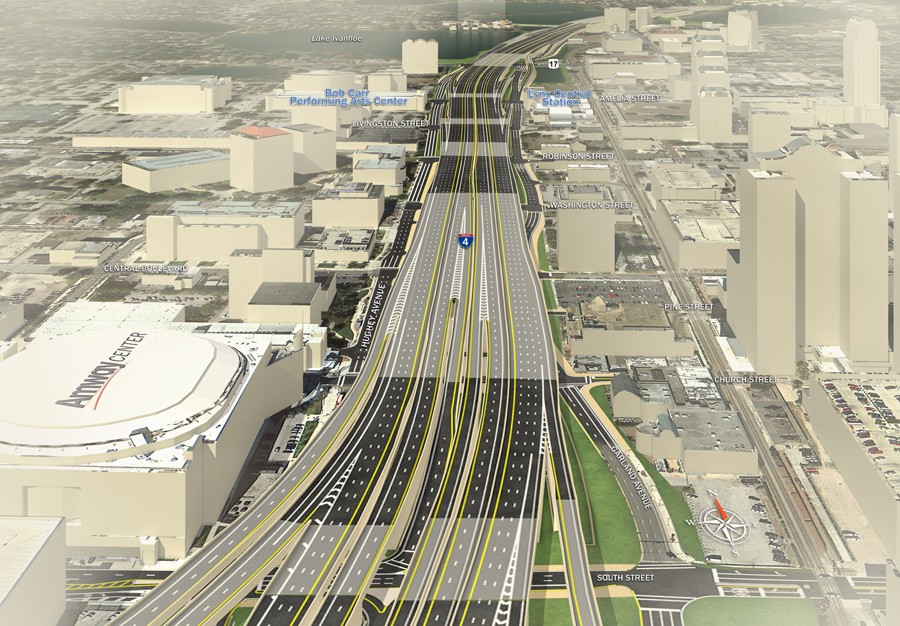 To be sure, it's not an exciting topic – roadwork rarely is – but it's already inciting road rage among anxious commuters wondering if it's going to make them even later to work for the next six years. If you thought I-4 was a nightmare already, prepare yourself for the long and winding road of transportation hell you're about to endure.

"Now is a good time to start testing other routes," Parks says optimistically. "Take a road you've never tried before." Right. The problem is that those roads and alternate routes are about to get a heavy dose of traffic, too – a level of congestion that nobody quite realizes yet. Highway 17-92 doesn't know what it's staring down right now, nor do any of the other main thoroughfares in this city.

Based on our exposure to the expansion, here are the most important things we think you should consider before the logjam brings your life to an infuriating stop.

1. It won't be an inconvenience, we promise.

One of the biggest takeaways from meeting with the FDOT brass was that consumers (er, people who drive) will not have that much to worry about. The scope of the project includes six eastbound exits and seven westbound exits. Although they also say that no bit of asphalt will remain unturned in the entire stretch, the affected lanes will only be closed between 8 p.m. and 7:30 a.m., so they'll still be accessible during peak hours. If you're headed to the mall in the evening or on the weekend, though, you might want to take a back road. 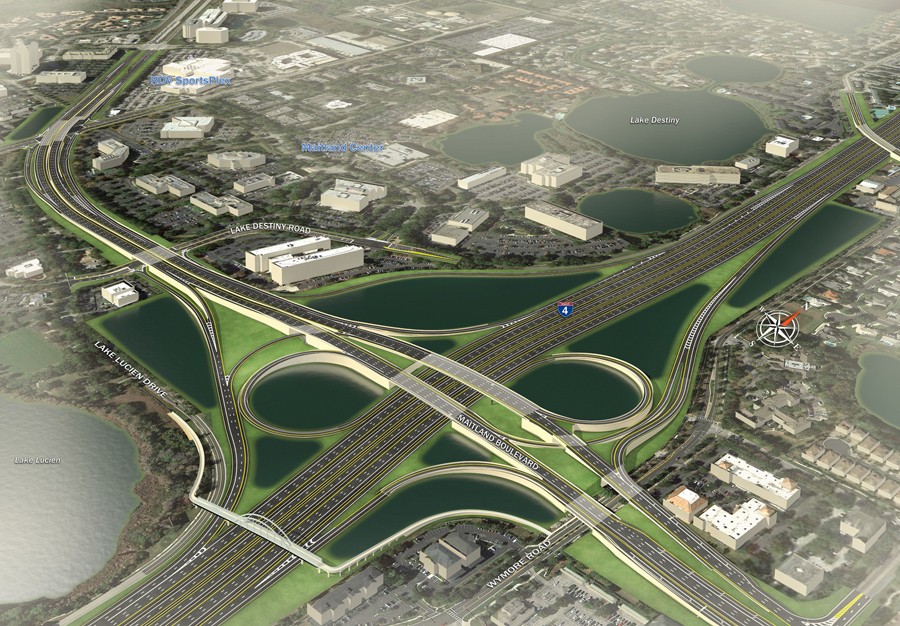 2. There will be tolls, but there will still be free lanes on I-4, too.

There will be four new express-lane options (two on each side of the highway) when the project is said and done in 2021. They will be tolled in a manner intended to keep the traveling pace at 50 miles per hour – the more people using the highway, the lower the cost to use the lanes will be. The idea, says Parks, is to maintain a "reliable travel time" for people. "Animated" signs indicating the cost for each segment – yes, each segment will have a different toll based on traffic – will be present, but if you're a regular person, just stay in the regular free lanes, maybe?

Managed toll lanes are becoming increasingly popular in Florida, but they don't always work the way they should. Just last month in Miami-Dade County, the Sun-Sentinel reported that the attempt to use tolls to maintain a steady infrastructural flow isn't really working on Interstate 95: "The state's goal is to keep traffic in the express lanes moving 45 mph or faster 90 percent of the time," the Sun-Sentinel reported. "It reached that goal only 59 percent of the time in the afternoon rush hour in both November and December, the most recent data available. Sometimes drivers end up going even slower than the regular lanes, especially where the express lanes currently end at the Golden Glades interchange."

Parks made clear, in no uncertain terms, that this was going to be an inconvenience for everyone at some point. There are no roadway construction projects that aren't – especially roadways that seemingly control entire corridors of commerce. If you have tried to navigate Interstate 75 through Atlanta, then you know what we're talking about.

So, if you've always been curious about SunRail but haven't gotten around to trying it, it's time to consider it. No, it's not as convenient or as easy as driving – there aren't enough stops, some stations don't have free parking, and once you get off the train, you still have to find a way to get from the platform to your office. If you work in downtown Orlando, there are rental bicycles conveniently located near some of the stops to help get you to your ultimate destination (visit orlandobikeshare.com for more info on how to get started), and you are welcome to bring your own bike aboard SunRail, too. And if all else fails, there's always Uber, right?

Sure, SunRail is not what we hoped it would be – limited hours, no weekend service (yet), glitchy ticket machines – but it will get you from point A to point B, and the extra time it takes to get to your office from the train will likely cause you less headache than sitting in stopped traffic. Plus, you can read while you're riding.