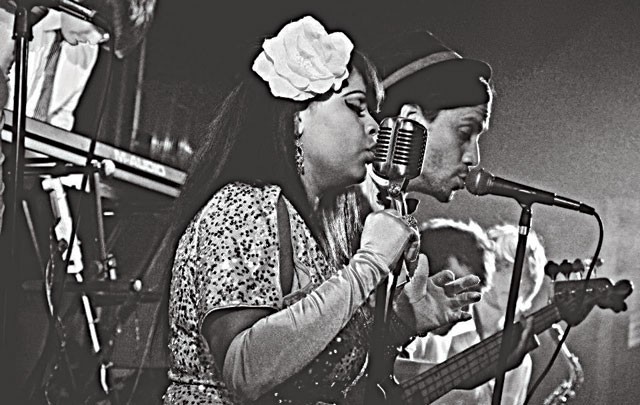 To capture the true sound of '60s soul, you need more than a guitar, drums and a bangin' female vocalist with real range. You need horns. And for the Sh-Booms, who have an ear for talent but a budget for nothing, filling out that sound has proven trying but ultimately rewarding. After a two-month show hiatus, the band is back on Orlando's scene, newly swollen, grown from the original six-piece set to offer a more rounded 10-piece sound.

The Sh-Booms will play their return show at Soul Fried Sunday at Will's Pub, the second annual soul takeover of the usual Southern Fried Sunday, which happens on the third Sunday of each month. They join locals the Legendary JC's and Fat Night, along with Miami bluesman Juke, and DJ BMF, who will spin before, between, and following each set. As is custom, the music is served up with free BBQ for all. SFS organizer Jessica Pawli says to expect a different crowd but the same spirit.

Newest members in the Sh-Booms include backup female vocalist Kris Osborne, guitarist Tony Aguirre, drummer Tyson Bodiford and trumpet player Joe Meadows, who you'll see along with the rest of the gang: Emily Patterson, Al Ruiz, Kevin Connolly, Samson Derrer, Earl Hoback and Davis Schleicher. And that's not even all the newness – the band just finished recording the last pieces of their upcoming 7-inch, which they hope to drop simultaneously with their new music video for the single "1, 2, 3's."

"We're building, it's getting better," Ruiz says. "We've almost been a band for two years now, but we all work jobs, so it's really hard to get together and organize this many people all the time for practice and recording and stuff. But it's coming together, slowly but surely."

The video will be shot and produced by John Taylor and Brett Banta of Mangrove Productions, and shooting is tentatively set to start on Nov. 25. Ruiz says he expects both the 7-inch and the video to drop by the end of January. Then, eventually, they will extend those two songs into an album.

Up ahead, the Sh-Booms share the stage with legit soul legend Lee Fields, who frequently rotates into the lineup of notable acts like Sharon Jones and the Dap-Kings.

"We're really excited; there's just a bunch of really cool stuff happening," Ruiz says. "Sometimes, it's like there's dead space between shows, or we're not writing or practicing, and then, all of a sudden, something gets booked, and we're like, 'Hmm, all right, cool.' Then, everyone gets motivated, and we start trying to piece our show together, change stuff around. It's going good. Right now, I'm really happy with it."