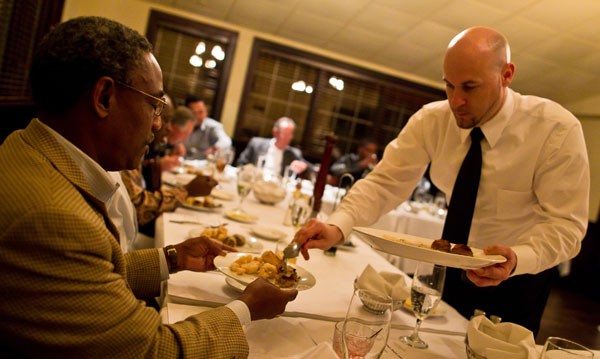 If you can’t bring the family to the table, bring the table to the family. That’s the antidote “family-style” dining establishments have administered to modern families who’ve lost the tradition of shared meals at the dining room table. The fact that many such establishments happen to be Italian is no real surprise – the dishes, for the most part, are simple and relatively easy to prepare and the flavors seem to cater to the still-forming palates of children. Like Maggiano’s and Buca di Beppo, Matteo’s on International Drive serves up family-style dishes, but it may be the best of the lot.

The building’s prosaic exterior is a holdover from its days as the Whistle Stop Junction, Nelore Churrascaria and Gol! The Taste of Brazil, but that belies a warm and welcoming dining sanctum of dark woods, cast-iron chandeliers and cream-hued walls. The dessert and antipasto station in the middle of the room is a little odd, but the wine vault adds a touch of sophistication.

Servers flaunt plates heaped with full-size and half-portions of antipasto, salads, pastas, poultry, meat and fish. (Fostering a convivial atmosphere is essential to the success of any family-style restaurant, but the over-the-top gesticulating and sloppy serving methods of our server were a little too Jersey Shore.) A tableside toss of Matteo’s chopped salad ($9.95, half; $14.95, full) was a nice touch, but even better were the stuffed mushrooms ($9.95, half; $15.95, full), which had everyone at the table bada-bing-ing like a bunch of goombahs. Herbaceous breadcrumbs cooked in olive oil, garlic and lemon juice are spooned inside plump mushroom caps and served piping hot. Exceptional baked clams ($12.95, half; $22.95, full), similarly, are lightly breaded and baked on the half-shell with the same ingredients, though the garlic came through a  little more.

From the vast selection of mains, the “Half Chicken Matteo’s for Two” ($34.95) was enough for our famished table of five. Lemony chunks of moist chicken came buried under a forest of broccoli, grilled peppers and onions. As if that weren’t enough, fattened rounds of tangy, not spicy, homemade Italian sausage were thrown into the mix. The veal chop Valdostana ($45.95) was a 15-ounce bone-in beauty – superbly  breaded, fried and crowned with prosciutto and mozzarella, then dressed with a liberal ladling of marsala sauce teeming with mushrooms. The meat’s tenderness was evidenced by our server’s exaggerated demonstration of cutting the meat with two spoons. The a la carte chop begged for a side platter of “burnt vegetables” ($11.95, half; $16.95, full): broccoli, zucchini, carrots, onions and red peppers wonderfully seared and bursting with flavor.

And bursting is what your belly nearly does come meal’s end, but to resist ordering a homemade dessert would be like unfriending Sammy “The Bull” Gravano on Facebook – you’d regret it. The light, flaky and airy Napoleon ($8) was the best dessert by consensus, and the cannoli ($8) was right proper. Citrusy Italian cheesecake ($7) was a  distant third.

Distance is always a factor in drawing city residents to I-Drive, but if Matteo’s hopes to avoid the fate of its predecessors, locals need to flock here, and flock here often. True, the prices can intimidate the pocketbook, but given the outsize portions and, more important, the high quality, Matteo’s, ultimately, makes an offer you  can’t refuse.