City Fire's flame is but a flash in the pan 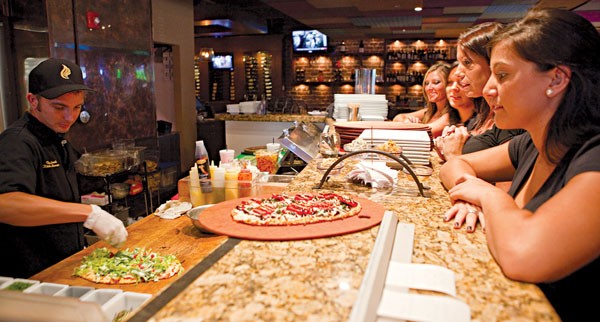 It's been more than two years since Manny Garcia last ran a restaurant in this town, yet gourmands still utter his name (and the names of his former eateries) with reverence. Pebbles, Harvey's and Manuel's were popular dining destinations for many years, but since selling off the Pebbles chain in 1998 and closing Harvey's and Manuel's in 2009, Garcia has been looking to immerse himself in another venture. Enter City Fire, an inviting "American oven and bar" that pays homage to Old Florida with an opium-den-meets-antique-store-meets-country-club aesthetic. The menu, overseen by Garcia's old comrade Tony Pace and chef Todd Baggett (Boheme, Manuel's on the 28th, Beluga, Moonfish), centers around the restaurant's stone hearth oven - the same one Urban Flats employed in this space prior to City Fire. Garcia's daughter and son-in-law officially own and run the restaurant with help from Manuel's former general manager Benj Ray, so there's no shortage of ability, know-how and experience here.

So we were a little baffled by the overall mediocrity of the dishes and disheartened by City Fire's unfledged and giggly waitstaff. Do we really need to be asked if we'd like spoons to enjoy a banana split ($8) for dessert? Or see servers (dressed in jeans and black T-shirts) incessantly flirt and joke around in a joint as classy as this? Catering to an "upscale casual" crowd isn't easy when a restaurant suffers from an identity crisis, and City Fire does. When servers find it hard to pronounce items on the menu, as was the case when we were presented with foie gras "thumbits"($16), it underscores that point. The unevenly pan-seared delicacy, served on crostini and adulterated with a heavy-handed goop of blueberry compote, was exceptional only in that it wasn't prepped in the brick oven.

We did, however, gravitate toward the oven-fired manchego cheese ($12), served on a square plate and lightly drizzled with tupelo honey and truffle oil. Also from the oven, the caviar and chevre flatbread ($12) was loaded with ingredients we found appealing - black lumpfish caviar, capers, onions and salty goat cheese - but the flatbread, charred in places, was overdone and mealy in texture. Braised boneless short ribs ($18) looked more like overcooked pot roast: tough, desiccated fists of beef accompanying equally dry mashed potatoes. The signature chicken vesuvio lasagna ($13), a variation of Pebbles' chicken vesuvio, retains the lemony smack of the original while lending the top layer of pasta a pleasant crisp.

Desserts, like the aforementioned roasted banana split, are prepared in-house, except in the case of the "chef's choice" cheesecake ($6) which, inexplicably, isn't. We opted for the promising heap of chocolate bread pudding ($6) instead, but were let down by the cardboard texture of the bread. Our accommodating and ingratiating server asked which of the items we had sampled won our favor. After slight hesitation, and with a hint of disappointment, we replied, "The chicken and the cheese." Our server, grateful and uncomprehending, seemed over the moon.

We, on the other hand, had fallen back to earth. Our expectations were high, but City Fire's flame flickered rather than blazed, and we all came away feeling a little burned.