Last month I shared some encouraging signs of recovery at Orlando's attractions, and those small shoots have become full-blown blossoms ahead of spring's arrival. Construction on Universal's Epic Universe has officially resumed, Walt Disney World's theme park reservations are booked solid with spring breakers, and all signs are pointing toward a blockbuster summer travel season. While you're waiting for the crush of tourists at Disney and Universal to subside, here are a couple of new outdoor attraction offerings outside of the big two theme resorts for you to explore in the coming crowded weeks.

Brickbeard's Watersports Stunt Show at Legoland:
Central Florida's oldest theme park has been through an amazing evolution over the past 85 years, beginning in 1936 with the botanical beauty of Cypress Gardens, then bouncing between owners from the 1980s through the aughts before finally being reborn as Legoland Florida a decade ago. Next year, the property will also become home to a pint-sized separate park themed around the popular U.K. kids' franchise Peppa Pig, but amid all these changes I'm happy to report that a time-honored tradition recently returned to Lake Eloise.

Brickbeard's Watersports Stunt Show debuted at Legoland Florida as part of February's Pirate Fest Weekends, and performances of the new show continue daily at the park's lakeside amphitheater. A replacement for the park's previous waterski show, which was retired prior to the pandemic, this new production packs plenty of aquatic athleticism and piratey puns into 25 minutes. 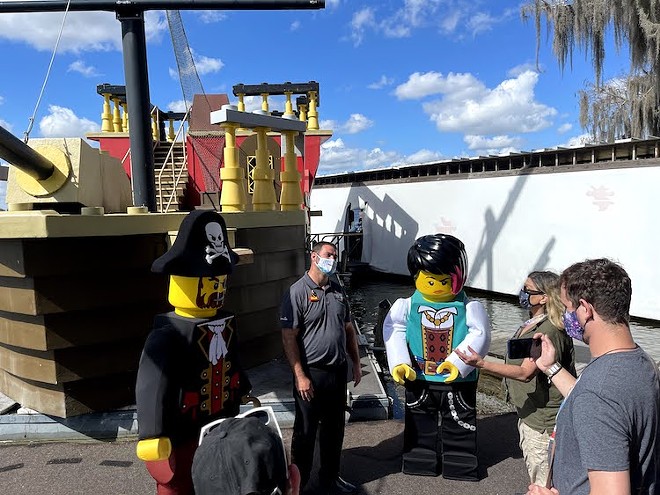 A pair of wisecracking scalawags narrate the barely-there plot, which involves new pirates being put through their paces prior to joining Brickbeard's privateers, and lead the audience in shouting nonsensical nautical insults.

The script is surprisingly talky for a family stunt show, and the impressive pirate ship prop sits sadly underutilized, but the stunt team's watery acrobatics compensate for any dramaturgical shortcomings. In addition to the familiar water skis, the performers employ innovative devices like Sky Ski hydrofoils and a Flyboard Triton, which blasts riders superhero-style 70 feet above the water's surface.

Best of all, the grand finale features a classic three-level pyramid paying tribute to the era when Cypress Gardens was the "Water Ski Capital of the World." With or without the plastic pirate shtick, that's a tradition worth passing on to the next generation. And after the performance, be sure to stroll through the beautifully preserved portion of the original Cypress Gardens, whose canals are currently receiving some much-needed restoration.

A word of warning before you attend: Although face masks are mandatory inside all indoor venues, Legoland is alone among the major attractions in encouraging but not requiring attendees to wear masks outside. Fortunately, weekday attendance in the sprawling park has been low enough to easily avoid any bare-faced crowds.

Casanova and David at Gatorland:
It takes a lot to get me to drive all the way down Orange Blossom Trail at dawn, but as a sucker for a good animal rescue story (or two), the recent arrival of Gatorland's two newest reptile residents was worth waking up for.

In 2018, David became an internet sensation when he was found swimming in Lake Michigan's Waukegan Harbor, with his mouth cruelly taped closed and his belly full of plastic debris. Casanova was freed from a drug dealer's den after 20 years of being kept indoors and only being fed one goldfish per month. Both alligators were nursed back to health by Rob Carmichael of the Chicago-area Wildlife Discovery Center, and thanks to Gatorland's Global Conservation Program — which is funded in part by the park's popular YouTube channel — they've both now found their "forever home" in south Orlando.

When I first started listening to Savannah Boan almost 25 years ago on 104.1-FM's Monsters ("of the Midday" back then) I never dreamed I'd someday hear her recounting how she slept in the back of a rental van alongside two full-grown gators while helping drive them across the country. Boan (now a skilled herpetologist) and the Gatorland team had arrived with their new guests only hours earlier, and were excited to release the duo into their new digs in Gatorland's waterfall pool.

The introduction went better than anyone could've anticipated, as both David and Casanova quickly began bellowing greetings to their fellow gators — despite never previously seeing another of their kind — and even made fast friends with "Pops," the park's septuagenarian patriarch.

If you want to visit with David and Casanova, viewing their habitat is part of regular park admission, which is discounted half-off for Florida residents through March 31. But for a truly unique view of these prehistoric creatures, spring for the Screamin' Gator Zip line, whose launch platform hangs directly over their enclosure. Don't worry, you should be perfectly safe ... just so long as you don't smell like plastic or goldfish.