Florida will bear the brunt of climate change. Why do we keep voting for lawmakers without a plan?

Photo via Adobe Images Hurricanes Irma, Jose and Katia in the Caribbean Sea and the Atlantic Ocean

Toward the end of the century, metropolitan areas such as Orlando, Lakeland, Tampa and Sarasota are expected to experience some of climate change's most dire impacts, according to a new study from the Brookings Institution's Metropolitan Policy Program.

The report, titled "How the geography of climate change could make the politics less polarizing," uses econometric analysis to estimate climate-related costs (in dollars and deaths) nationwide from 2080 to 2099. Noting the increasing threat of hurricanes, sea level rise, massive agricultural losses and growing energy needs, it concludes that a dim future awaits the southeastern portion of the U.S. – especially Florida.

On the regional level, the study found that eight of the top 10 metropolitan areas most susceptible to climate-related effects are located in the Sunshine State, with the Lakeland-Winter Haven area ranked No. 1 overall. Researchers claim the area could lose as much as 17.5 percent of its economy by the time period measured in the study.

Meanwhile, No. 2-ranked Tampa-St. Petersburg-Clearwater is expected to lose as much as 16.8 percent, followed by No. 4 Cape Coral-Fort Myers (14.2 percent); No. 5 North Port-Sarasota-Bradenton (13.5 percent); No. 6 Deltona-Daytona Beach-Ormond Beach (12.9 percent); No. 7 Palm Bay-Melbourne-Titusville (12.8 percent); No. 8 Orlando-Kissimmee-Sanford (12 percent); and No. 10 Miami-Fort Lauderdale-West Palm Beach, which researchers predict will suffer a 10 percent overall loss.

The only two metro areas outside of Florida included in the top 10 were No. 3-ranked McAllen-Edinburg-Mission, Texas, and No. 9-ranked Jackson, Mississippi.

But the blame doesn't necessarily fall on the aforementioned metro areas. The study maps voting records by geographical area as well, charting the statewide politics of climate policy for each respective region.

The researchers found that states, counties and congressional districts that voted Republican in 2016 and 2018 are expected to suffer greater economic and environmental damages from a changing climate over the coming decades than areas that voted Democratic in the past two election cycles. Nine of the 10 states that could potentially experience the highest losses voted for Donald Trump in 2016, including Florida, Mississippi, Louisiana, Arkansas and Alabama. 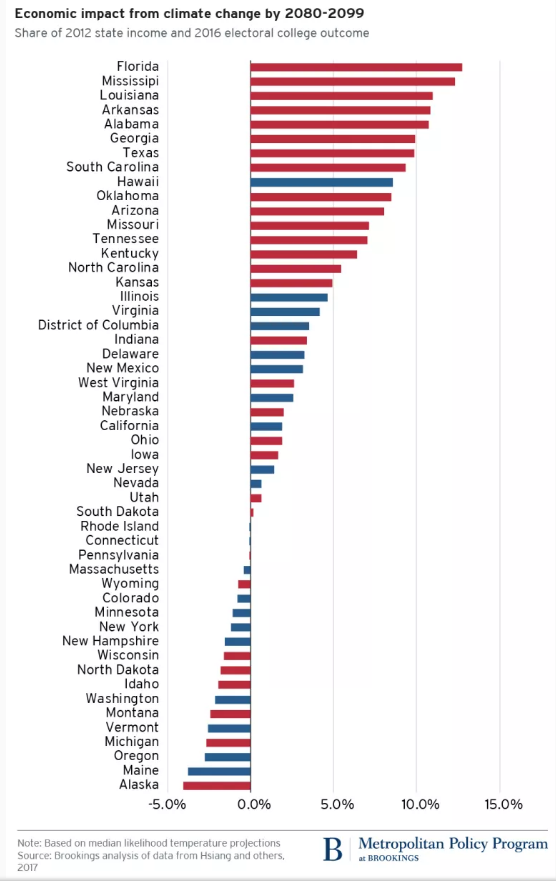 "In much of the country Republicans are voting for people who are opposed to climate policy, even as they are the most exposed to climate impacts," writes policy director Mark Muro, energy and climate co-chair David Victor, and senior research assistant Jacob Whiton in the report.

However, Florida may be waking up, as some of the state's elected GOP officials have begun to voice their concerns on climate impact.

Asked to comment on the Brookings study, Murphy says, "Floridians are at the frontlines of this fight, which not only threatens to change our way of life but has a direct impact on our state economy by diminishing our place as a top tourist destination. It is time for lawmakers to begin taking reasonable steps to address this problem before we are unable to reverse the way it could put both our environment and economy in peril."

The effort doesn't stop at the federal level.

"I think there is a growing bipartisan effort to address this," says Chris Castro, the city of Orlando's sustainability director. He says the city is currently in the process of working with the East Central Florida Regional Planning Council to develop ways to expand on the city's efforts, such as its commitment to convert the entire city vehicle fleet to use alternative fuels by 2030.

"People who live in Maitland and Eatonville and Winter Park, they often ask me what we're doing as Orlando to influence other local governments and counties," Castro says. "And we didn't have a very good answer other than getting the word out through these community forums and engagement."

Castro also points to the efforts of Orlando Mayor Buddy Dyer, who's been at the forefront of the environmental movement as one of the nation's first mayors to sign onto the Climate Mayors' Pledge – a coalition of over 400 mayors countrywide who have committed to significant greenhouse gas reductions, despite the state and federal rhetoric that surrounds climate change.

Castro says, "We need to stick our necks out and do everything possible to ramp up our efforts around climate mitigation and adaption to ensure that we sustain Orlando's growth and its wellbeing well into the future."