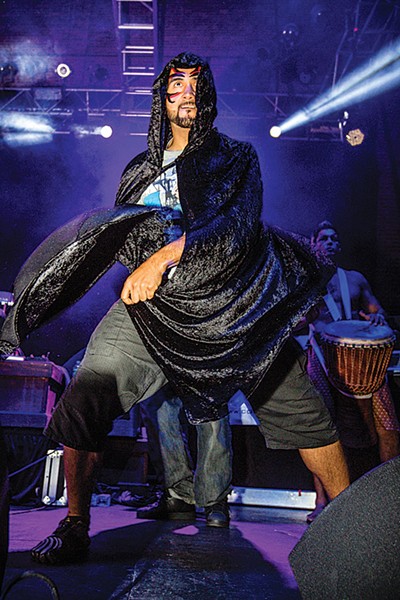 Solillaquists of Sound producer-MPCist Glen “DiVinci” Valencia Jr. is no pussy. Just ask Ms. Lauryn Hill, who serendipitously met the local hip-hop talent in July 2011 and now counts him as collaborator and friend, extolling him as a soldier of the stage due to his ability to be assertive, helping to strengthen her live show without creatively overstepping or losing himself to her sound.

DiVinci had just landed in Philadelphia to catch a connecting flight to Orlando from Solillaquists’ tour in France when he got the call inviting him to join Hill’s band to perform at the 2011 L.A. Rising Festival. On the other end of the line was Hill’s manager, a former Orlando local who had hooked Solillaquists up on their first official tour in support of Dwele in 2004 because the band’s live show impressed him. Despite the facts that DiVinci’s gear was already on its way to Orlando, the show was in less than a week and he ordinarily does not make snap decisions, he knew his answer instantly.

“In the past, for stuff like that, I would’ve been like, ‘Ah, I gotta check my schedule,’” DiVinci says. “But something about this, I was like, ‘Yes!’ I didn’t need to think. I interrupted him. I just yelled, ‘Yes!’”

Really, it’s the only natural response for someone with hip-hop in his blood when the “mother of hip-hop invention” calls. DiVinci remembers making video mixtapes of Fugees remixes ripped from episodes of Yo! MTV Raps, and he followed Hill’s solo career closely because he always felt she was the best MC and singer in the group. So it was trippy enough to be there on her stage, programming drums live alongside music vets like Living Colour’s Doug Wimbish. But when she invited him to join her as she performed The Miseducation of Lauryn Hill in its entirety for the Rock the Bells ’11 tour, time basically lost meaning as his past and present blurred.

“We redid every song from scratch,” DiVinci says. “So I’m sitting there programming drums for songs that I used to sample, and I’m sampling them again so I could make them work for her. It was a crazy moment of realization that, ‘Man, when I was a young teenager, I was sampling this snare from “Lost Ones” to make some of my own first beats.’”

Before long, DiVinci became known as the band’s GPS, providing audio and visual cues to keep stage communications clear, something Hill was criticized for when she did Rock the Bells in 2010. His role in the band broadened as he recognized that Hill’s vision was not always completely delivered upon, and he incorporated a laptop into his stage setup to contribute backing tracks in addition to his live drum programming.

“I saw what she needed and what she was asking for all the time,” DiVinci says. “And one of my things is I love to problem-solve. I’ve always wanted to be an inventor, and she’s very inventive herself. She’s all about using new technologies to achieve what she wants creatively. And I’m exactly that person. I love that.”

He’s since traveled with Hill extensively, spent holidays with her family (her youngest child, Micah, was born days before the two met and knows him as O’Vinci) and spoken at length in person and via text about personal philosophies and tackling life’s challenges.

“She and I hit it off, not just on a creative level, but on a personal level and have since become really close friends,” DiVinci says. “She not only liked my technical savvy, but she loved my attitude.”

This week, DiVinci’s worlds collide as Solillaquists of Sound open for Ms. Lauryn Hill at House of Blues. DiVinci credits his Solillaquist family for helping him develop into a musician confident in his abilities that are frequently inspired by the unique talents of his collaborators.

“I learned how to deal with leaders and how to be a leader myself amongst other leaders with Solillaquists, and I think that’s what made me and Ms. Hill hit it off,” DiVinci says. “You’d be surprised – or maybe not – of how many people do become timid around her and kind of take themselves out of the equation. She needs you to be present.”

This is Hill’s first tour without DiVinci since they met, but he’s been on call to consult with her band along the way. You’ll notice during his set with Solillaquists that he lumped his laptop into his own band’s live performance, so while Hill’s band benefited from his technical artistry, working with them enhanced his sonic arsenal as well.

“I always like reinventing what I use and how I use it,” DiVinci says. It’s likely that’s his X-factor.