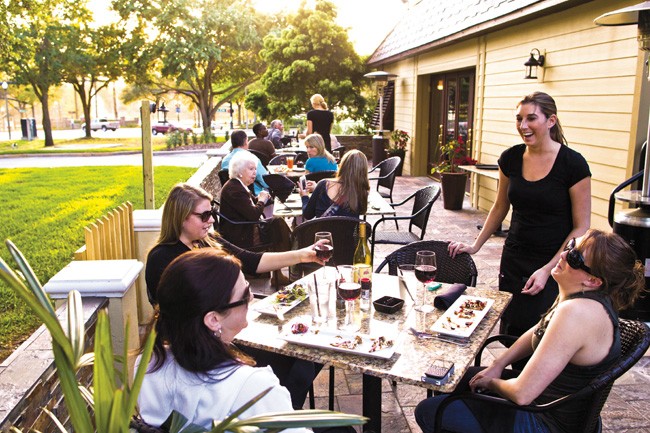 Truth: Maitland is hurting for new dining blood. Since the area north of Park Avenue has grasped the attention of restaurateurs and gentrifiers (and lost some of its staple dining spots), Maitland has gone largely ignored. That is, until SoNapa Grille and a few other new restaurants opened, and all of a sudden the corner that once housed Steak & Ale became a hot spot.

SoNapa is the kind of place you might like to curl up in during a chilly, misty Northern California evening. The main dining room is covered in river stone and dark wood, with red banquettes and a large fireplace as centerpiece. The bar area is lovely, too, but the 50-and-older crowd dampened the mood from lively to languid. The name at first sounds mildly Valley Girl ("Ohmigod, that dress is, like, sooo Napa!") but I was told it's a combination of Sonoma and Napa. Knowing that, I expected to see some creative combinations of fresh food prepared simply, a nod to the chef who arguably invented simple-is-best Northern California cuisine, Alice Waters. No such luck.

We started with the Sea Ranch scallops ($10) and the Chalk Hill flatbread ($8). The flatbread was crispy and loaded with hunks of brie, spinach and diced tomatoes and drizzled with balsamic reduction, which afforded the dish enough acid to complement the creamy brie nicely. The scallops, though, weren't worthy of their iconic designation. I'm not sure why the mollusks themselves weren't seasoned – I assume that the chef considered the bacon wrapping salty enough. Unfortunately, it wasn't, and while nicely cooked, they were unspeakably bland. I'd like to write that the lemon-butter sauce was the saving grace, but it wasn't. It was bafflingly flavorless.

Entrees arrived promptly after appetizers. The underwhelming 5-ounce filet placed in front of my dining partner was sided with a pile of asparagus and an embarrassingly small portion of the "seasonal vegetable" (yellow squash – which is not, in fact, in season). The portion was not only minuscule, the slices of squash were unevenly cooked – some were practically raw, while others looked like they might have sat in a steam table for a while. The steak itself was cooked to the requested temperature, but bite after insipid bite, it became glaringly obvious why this steak cost $17 and the one we ate recently at a high-end area steakhouse was well worth the $46 price tag we'd scoffed at.

The pork osso buco ($19), on the other hand, was delicious. Large, tender chunks of meat freely fell off the bone, and we were even able to dig our steak knives into the hollow of the shank and glean some buttery marrow. I expected the side of pesto risotto to be bright green with pureed fresh basil leaves stirred into the creamy rice, but, disappointingly, the risotto was just flecked with tiny specks of dried basil. No points for creativity on the dessert menu either: The 1970s want their one-note chocolate lava cake, cheesecake and pineapple upside-down cake back.

While the service was solid, SoNapa falls short on the big stuff (unseasoned, unimaginative food) as well as the details: maddening spelling errors on the menu and awful Muzak playing in the dining room, which prompted my companion to exclaim mid-bite, "I feel like I'm on hold!" Though it's a pretty spot for a casual glass of wine and the promising-looking cheese plate ($9) the table next to us ordered, any plans to return to SoNapa are also on hold for now.