Dr. Moonstien wrings music out of old electronics - and he'll teach you to do it, too 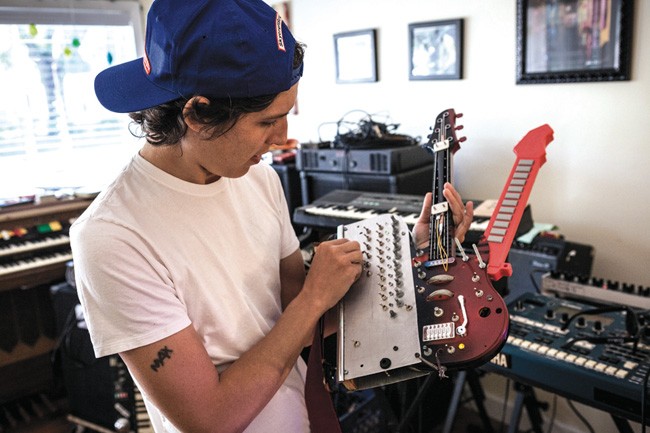 In a charming home on a quiet street in Winter Park, Dr. Moonstien is violating what could be your old Game Boy right in front of me. He holds half of the gray plastic chassis in each hand, exposing the innards and revealing the simple but effective modifications he has made to the circuit board to turn the pre-adolescent passenger's road-trip pacifier into a versatile tool for musical expression.

Moonstien (né Max Schwartz) is a practitioner of what is known to an international network of self-described hackers and makers as circuit bending, the experimental customization of circuit boards from old electronic equipment to create unique musical instruments. His otherwise tidy home contains a workshop that is as chaotic and experimental as the instruments he builds: from the aforementioned Game Boy, which can wildly vary the playback speed of a game's soundtrack to dizzying effect, to the formidable Bread Box, a combination synthesizer and sequencer that is virtually a lo-fi electronic studio in a box, and merits more than the 16 minutes of demonstration you can watch on Moonstien's YouTube channel.

To hear more, you will either need to buy the instruments he has for sale on eBay (building is his full-time job) or come to Urban ReThink for the Hacker Sound Workshop on April 29. Anyone interested in electronic or acoustic instrument building is encouraged to come with projects, questions or ideas. Urban ReThink's Pat Greene and Ryan Price conceived the event, which will feature Moonstien demonstrating and leading workshop attendees through the construction of a simple circuit-bent instrument, and other local makers teaching the basic principles of circuits and helping newcomers with their projects. After the construction workshop, attendees will break for dinner and then reconvene to improvise a performance on their new creations.

Price says this type of exchange between experts and non-experts allows for anyone to create and learn about music and instruments. “A friend of mine is building a marimba out of PVC pipe with his 9-year-old son, who is learning not just to play it but how to build it. You could bring anything with a circuit board, or any instrument of any kind, really.”

Moonstien's YouTube channel hosts demonstrations of more than 200 of his creations, some recognizably derived from Casio keyboards and electronic toy guitars, including a Star Wars-blaster-cum-analog-synthesizer. One of the most interesting creations in his personal collection is modeled after the African mbira, or thumb piano. In the traditional acoustic instrument, metal tines of various lengths are mounted to a resonating box and plucked by the performer's thumbs, creating a sound similar to a modern orchestral marimba. Dr. Moonstien's electrified version features a sampler and sequencer that allow the performer to loop sequences of notes and control the speed of the loop's playback.

While my understanding of electricity begins and ends at “pull door handle, see cold food,” Moonstien assures me that there are very simple steps to building, for example, a theremin-like instrument that uses phototransistors to convert light into sound.

“Circuit bending is really easy,” Moonstien says. “Remember the first time you tried to play guitar? It's way easier than that.” He's ready to prove it.