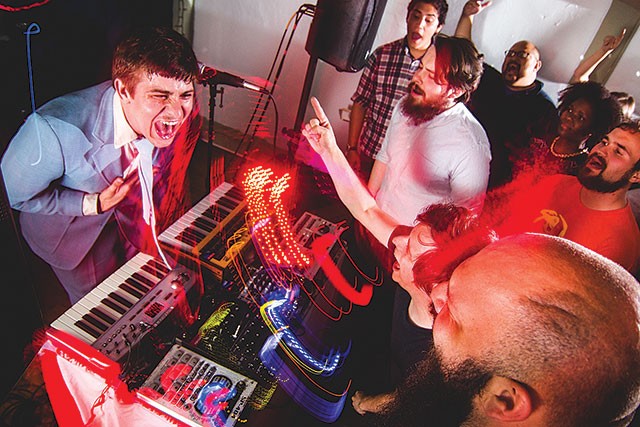 Superstitions are not just for sports fans. Artists get just as attached to creative rituals, objects and places, establishing what’s almost a dependency on these fixed muses to repeatedly inspire new works. In Orlando, there’s a spot that has lit up the minds of local writers, artists, comedians, thinkers, dancers, musicians and more. It’s called the Space, it’s located above Anthony’s Pizza at Colonial Drive and Mills Avenue, and it is more than just the blank canvas for some of the city’s most original events.

“The venue is unique because anyone can make a show and anyone can go,” the art installation collective known as Shine Shed testifies. “This promotes unprecedented experimentation, creativity and accessibility for the Orlando art and music community.”

To utilize the Space, you can try to reach out via their website (thespaceistheplace.com) and describe your event. If granted access, the cost to reserve the Space is “whatever you feel is an appropriate amount to give.” As a truly DIY venue, the Space relies on donations from patrons and arts organizations to pay the rent and cover general upkeep. Rather than pursue grants or cry for outside funding, the Space, dignified, looks within.

“I’ve personally used it for a rehearsal space and a place to hold an art event,” says Orlando artist Jessica Earley. “Meg [McNash, the Space’s founder] has always told me to give a donation of whatever I can, so I donated all the profit from the art event to the Space because her generosity helped me do a lot of things I otherwise would not have been able to do, due to finances. Totally love this place.”

The event Earley refers to was called I Believe in You and featured the works of seven local artists, each dotingly curated by seven different artists in August 2013. They paired up, artists propping up artists, the experiment strewn throughout the Space’s different rooms. That event inspired The Caress of Progress, a combination of live music, storytelling and theater that was presented as an “interactive ride,” steering attendees through installations created by Shine Shed. Our arts critic, Seth Kubersky, called the show “intoxicatingly original.”

33 weird/beautiful moments from ‘I Believe in You’

Local musician and Shine Shed member Ark Calkins believes that communities are built on venues like the Space – especially informal venues where touring shows can stop through with low overhead and without the notice that formal venues like the Social or Will’s Pub require (Gainesville’s Hear Hums agree, band member Mitch Myers says, “I’ve played all over the country, from bedrooms to Live Nation venues, and I’ve got to say my favorite spaces are places like the Space. … It is becoming increasingly difficult with inflation to make ends meet as a touring musician, and to have a space that doesn’t have a huge overhead is essential, because it means not overcharging patrons of the scene while still compensating the guest artist with enough money to get to the next city and maybe cover some groceries.”).

That’s why Calkins and Bryan Sherbrook, guitarist for the Plush Monsters, hatched the idea for Space-Fest. It’s a fundraiser, but not in the sense that they rely on the goodwill of outsiders to support the venue, but more as a reminder to those who benefit from the Space that, along with all the imaginative ways the venue can be retooled, the reality is that there are literal costs for that creative freedom.

Space-Fest is part music festival, part workshop and part visual spectacle. From 6-11 p.m., festivalgoers can participate in two different workshops. Local zine-makers Is It Over Yet? demonstrate zine-binding for those looking to launch independent rags. Shine Shed (which hosts regular “Shed Nights” to share their range of skills) will show off their construction, soldering and electrical wizardry, and anyone looking to learn a thing or two is encouraged to bring materials such as Christmas lights, scrap metal, rebar, chicken wire, used or broken electronics, CDs, cassettes, VHS tapes, small appliances or other oddities that you recognize have transformative qualities.

“Shine Shed and the Space have been friends since day one,” Shine Shed members submitted as testament to the venue’s secure place in Orlando’s creative heart. “As soon as we stepped inside, we saw the Space’s potential. It has rooms of multiple sizes, can be open any time of day or night and is located in the heart of Mills 50. There are endless creative possibilities.”

Musicians start performing at 11 p.m. at Space-Fest, including Zap Dragon and the Attack, Michael Parallax, Case Work, Bellows, Ark, Adi Raja, VSN QST and the Plush Monsters – covering an array of music genres that illustrate the eclectic sounds the Space has welcomed. There will also be tarot readings by Cathleen Bota of Literocalypse, an offbeat literary group that launched their efforts in the venue.

“Our vision was to develop a literary series, something between the traditional and experimental, that embraces and encourages writers and writing from diverse spheres,” Bota says. “The Space’s generous hallways and rooms have allowed us to do just that. As Literocalypse continues to flourish, we become more intertwined with the Space, not unlike the colorful friendship bracelets we occasionally dole out to our attendees. The Space is the kind of venue that not only humors but enthusiastically supports two weirdo librarian writers with a dream.”

Further, Ibex Puppetry’s Hannah Miller pairs up with puppeteer/engineer Katie Correll (who appeared on season two of King of the Nerds) to perform a puppet show at Space-Fest that’s based on the experimental shows they created for the 2014 O’Neill National Puppetry Conference. While Miller’s enthusiastic for the novel events this week, her excitement about what’s to come for the Space looks further down the road.

“There’s so much for the Space in the future,” Miller says. “For once, we have an open gathering place, a sort of old school salon that is looking at expanding, instead of failing. You have the yoga, dance church and all sorts of random things happening there that are all extensions of the artists’ interests who perform there. It’s a home away from home. It’s a salon. It’s a gathering place. And I think it is a success.”

Hearts in unison: Photos from Michael Parallax, Dromes and Michael Serrin at the Space