The Pharmacy, a speakeasy-style restaurant in Dr. Phillips, makes addicts out of diners

When the trio of Loren Falsone, Tyler Brassil and Dominick Tardugno wowed diners with the Table – their fashionably exclusive 22-seat, weekend-only resto in Dr. Phillips – you got the sense the concept was just too small to contain their talents. An expansion of sorts was in order, and soon was born the Pharmacy next door. The modern-day boîte disguised as a 1920s-era speakeasy disguised as an apothecary retains the Table's aura of exclusivity – if not by virtue of its theme, then certainly by the lines clamoring to get past the lemon-squeezer (for all you young folk out there, that's an elevator).

Inside, Jazz Era standards echo throughout. A backlit bar bisects a dining room awash in antiseptic gray, its walls adorned with faux antique mirrors befitting a turn-of-the-century pharmacy. We took our seats at one of the rustic wood tables, then partook in one of their much-ballyhooed "elixirs." The ballyhoo, by all indications, is well-deserved: Stiff, hand-crafted poisons (mostly $12) with such names as "Trapped in the Basement" and "The Barry McCauckiner Cocktail" were duly downed. Next our "prescriptions" were filled by chefs Falsone and Brassil and delivered by servers in white shirts and aprons. And their remedies really are an antidote to the pedestrian finds on West Sand Lake Road.

A scoop of bone marrow ($14) on 100-year-old sourdough crostini, embellished with pulled oxtail and ghost chili-strawberry preserves, will have you convinced. The stacked bones make a dramatic presentation – much more so than plating them as "canoes." Fried green tomatoes ($12) frittered in chunks instead of slices were original, and it's hard to be original with fried green tomatoes. More originality: The battered nuggets came served over a layer of creamy corn curry topped with microgreens. On paper, the grilled stone clams ($12) with Maryland blue crab and corn niblets seemed an intriguing choice, but the sambuca cherry ultimately undermined the flavors of the seafood – overpowered it, even.

But the kitchen's creativity shone again with a plate of mild "bright lights" Swiss chard ($21) draped in wide pasta sleeves and slathered in garlicky sausage sauce and shaved Parmigiano-Reggiano. The buttery sauce added a nice density to the dish, just as the roasted acorn squash gnocchi did to a serving of perfectly pan-seared Chilean sea bass ($29). The highlight, however, was a lemony chicken-Parmigiano broth, poured tableside, that really gave the sea bass profundo. 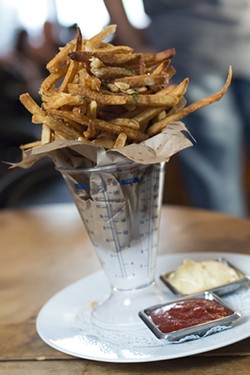 I should mention that in addition to the creativity, there's a real focus on local sourcing. In fact, most of what we ate (bone marrow, fried green tomato, stone clams and Swiss chard) was procured from local purveyors. We kept it going with the Plant City strawberry and rhubarb cobbler ($12) for dessert. It was served in an earthenware bowl and topped with a big scoop of double chocolate ice cream. Peeve: When ice cream comes plopped atop a dessert, the whole bloody thing turns into mush. Suggestion: Alter the plating so that we can enjoy the pie.

Some servers are a little more rough around the edges than others, but they all aim to please. Really, it's hard not to acknowledge the Pharmacy's consistency in service and kitchen prowess. They exhibit the same dedication to creativity in food and drink as they did when they first opened in early 2013. So if your recent restaurant forays have failed to lift your spirits, and the same ol' joints don't razz your berries anymore, drive up to the Pharmacy. It hits on all sixes.