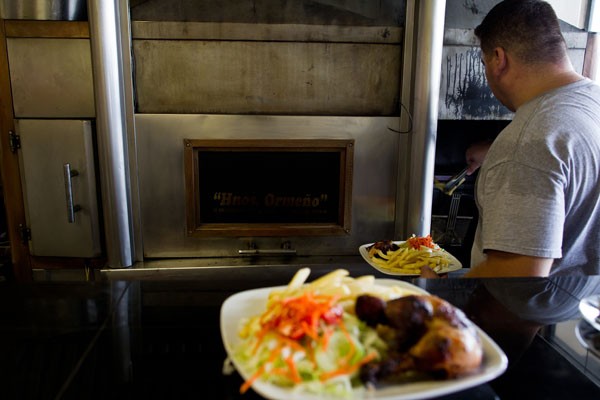 I was told that Tati’s, a Florida Mall-area Peruvian joint, was small in stature but big on flavor. So, along with a grumbly-gutted group of gourmands, I set forth for the diminutive strip-mall eatery – only to find that Tati’s was no more. But in that very space sat a jolly chap tending to a pollero he said had just been delivered from Lima, Peru. Inside the steel monstrosity whirled a number of rotisserie chickens – basted and marinated in the secret blend of seasonings for which Peruvian pollo a la brasa has become renowned. He assured us he was open for business, though signage and menus were nonexistent. “Pollos a la Brasa Mis Amores,” he proudly bellowed when asked for the name of his new establishment. It’s an unusual yet exclamatorily endearing handle, so we sat down at one of the four-seaters and watched as the shiny contraption cranked out spit-fired birds at a rate that allowed plenty of time to enjoy the restaurant’s other specialties.

We enjoyed a vibrant ceviche pescado ($14.99), a heaping mound of corvina cured in citrus and spiced with rocoto, a snappy red pepper used widely in Peru. An ear of meaty corn on the cob (of the white maize variety) lent authenticity to Peru’s most famous dish. When we saw an extra-wide tray of freshly made empanadas ($2.50) being delivered, we couldn’t help but sample the flaky wonders baked with spiced ground beef. As a testament to their popularity, the empanadas were sold out on two subsequent visits, so if they got ’em, get ’em.

When the roasted chicken (quarter $5.99; half $10.99; whole $18.99) arrived, it didn’t disappoint. As expected, the meat was extraordinarily juicy, the flavor beguilingly herbaceous, and the skin crisped to an enticing copper hue. (Note: On another visit, one of the pieces – a roasted leg – yielded partially uncooked flesh closer to the bone.) Prices here are noticeably higher than at other pollerias like Brazas Chicken and Pio Pio, where a whole chicken runs less than $10. Still, you’ll find a dedicated clientele – white- and blue-collar types, mallrats and day laborers – patiently awaiting their take-out  chicken orders.

In comparison, the Chifa, or Chinese-Peruvian offerings, weren’t as compelling. The heaping plate of chaufa de carne ($11.99) is a hungry man’s plate of fried rice with eggy bits and beef strips – a filling, albeit second-rate, choice. Lomo saltado ($11.99) presents a far tastier option and, like so many dishes here, is big enough to feed two people, if not more. Strips of tender sirloin are salted and sautéed in a light soy sauce along with vinegar and biting aji amarillo, a yellow chili pepper. Tomatoes and onions are added for a crisp texture and the whole mix is poured over white rice and French fries. The chef appeared to take great pride in preparing the dish, and just watching him was a pleasure. A wee splash of rocoto chili sauce over the stir-fry makes it all the better.

From the Inca Kola to the Latin rock, Mis Amores is the kind of place one might actually find in Lima. Now, if only they had Pisco sours on the menu …