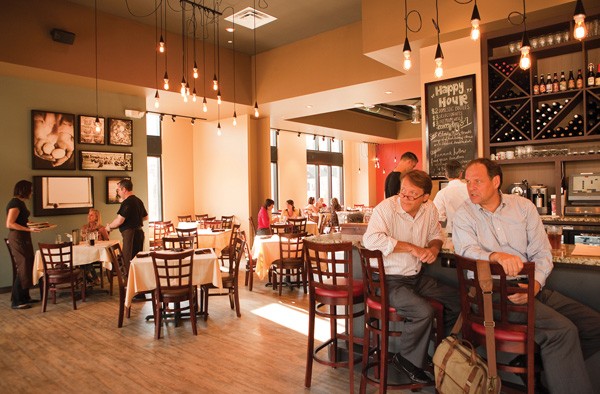 I’ve seen them on the squeaky-clean streets of suburban Lake Mary; beckoning the bourgeoisie in Winter Park; even leaving their mark on hotel-bound tourists on I-Drive. Now they’ve struck the city’s core, impressing poseurs and profiteers with the new style. Beliebers? Not quite. City officials out to nab our homegrown Food Terrorists? Close. I speak, naturally, of gastropubs – those something-for-everyone solutions to the most befuddling of dining quandaries. Pint after work? Head to the gastropub. Craving gruyère? Gastropub! Crudités? Fish and chips? Braised lamb? Napa Valley cab? Gastropub! Yes, the gastropub, at least in its American incarnation, can now be compared to the “bar & grille” of yore, albeit with a slightly more sophisticated bent, swish decor and a moniker vaguely British in evocation and proletarian in pretense. Indeed, movements have sprouted to replace the “gastropub” appellation altogether, but until we see “fooboozerie” and “restbaraunt” etched onto facades, we’ll just have to get used to the trend.

Cue the Rusty Spoon, a gastropub cut from the same proverbial cloth as the Ravenous Pig. If the Pig’s a leather jacket, the Spoon is its matching gloves, but both are material to the city’s dining scene. Housed on the ground floor of the 55 West building in the heart of Church Street, the Spoon brings a locavore credo to match its urban-farmhouse vibe of unadorned brick walls, dangling light bulbs and natural woods bathed in natural light. As we downed minty watermelon-shooter amuses, we took notice of the black-and-white farm-animal photos. Mildly discouraging? Possibly, but if snapshots of the hen don’t turn you off, consider a salty starter of boiled Lake Meadow eggs ($6), de-yolked, halved and stuffed with tapenade, herbs and oven-dried tomatoes. Otherwise, a heavily capered carpaccio ($14) adorned with Waterkist Farm arugula and served with toasted baguette rounds is the way to go. (Just look away from the close-up of the cute Deep Creek Ranch cattle.)

Needless to say, Kathleen Blake, who plied her craft at both Pine 22 (a sister restaurant) and Primo, presents a rustic card of locally farmed and raised ingredients, but not obsessively so. Duck breast ($25) was sourced from Grimaud Farms in California, but that didn’t stop us from sampling the West Coast waterfowl, cooked to a perfect medium-rare. Huckleberry jam offered some “sweet” to the duck skin’s “salty,” while wilted spinach and toasted orzo with hazelnuts rounded out the dish nicely.

The wonderful grilled culotte steak ($22) featured a coffee-rubbed top sirloin sprinkled with sea salt and served with fingerling potatoes. I enjoyed the wilted greens as well, but could’ve done without the heavy-handed splash of salsa verde that looked and tasted like a too-oily chimichurri.

Since the Rusty Spoon fancies itself a gastropub, libations are as much the focus as comestibles, and you’ll find a small, but decent, selection of craft beers as well as signature drinks and wines. Servers were thoroughly pleasant, efficient and, when it came time for dessert, amusing. We were given a couple of “rusty spoons” – uncorroded auburn-hued utensils – which we happily employed to ravage the grown-up s’mores ($7), chocolate mousse layered between a graham-cracker crust and soft marshmallow on a plate brushed with caramel. The duck-egg sabayon ($7) was boring, and too sweet, by comparison.

For better or worse, gastropubs – be they true-to-the-word or loosely termed – are having their culinary moment in the sun. In the case of the Rusty Spoon, this gastropub by any other name would taste as good.