SPREADING OUT IN ALL DIRECTIONS

How does one assess the best changes in our young city or the best ones yet to come – this being a city that is predicted to have a population the size of Los Angeles in another half-century or so? Take a scouting approach, I decided, and headed out in four directions to the far reaches of what's loosely defined as metro Orlando to see what there was to see. Follow me.

Driving toward the sunset on the East-West Expressway extension, I ease onto the Florida Turnpike, which eventually drops me off in Clermont, in Lake County, southwest of Orlando, after about an hour. Never having visited the famed Citrus Tower, I was eager to take the elevator to the top and see what the continued affection was for this Old Florida attraction. The lofty if spartan structure will see its 50th anniversary in July 2006; how big the celebration is depends on who wants to help foot the bill.

The explosive development of Clermont – and Central Florida at large – is evident in the retail businesses and restaurants that now hem in the tower, on land that was once rolling orange groves before the devastating freezes of the 1980s. The tower looks out of place, with only one grassy open space left in the front, and that will soon be home to a bank. When you hear people talking about building on every square inch of Florida, believe them.

Yes, times are hard for this historical attraction; its history is encapsulated in the black-and-white Xeroxed sheet that serves as promo material: "Erected in 1956 on one of the highest hills in Florida's ridge section, this splendid landmark contains 5 million pounds of concrete and 149,000 pounds of reinforcing steel. The original plans specified a height of 75 feet, but when completed, the Tower rose to the lofty height of 226 feet (equivalent to 22 stories), the tip of its highest antenna piercing the sky at a point around 500 feet above sea level. It was constructed to withstand winds of more than 190 miles per hour." The tower was the brainchild of A.W. Thacker and Jack Toole, who sold stocks to the public in order to finance a project that was to showcase the thriving citrus industry.

The Citrus Tower has always been privately owned, and owner No. 4, Greg Homan, is still optimistic. He says he bought the Citrus Tower 10 years ago, mostly for the 12 acres of prime commercial real estate that came with it. Homan, who's lived in Clermont since 1969, has developed a fondness for the oddity and enjoys keeping it going, even though the tourism industry isn't what it used to be. After all, once the citrus industry disappeared, so did the out-of-town visitors.

"The number of tourists is a fraction of what `it was` when we had citrus," he says. Still, the revenue pays the taxes and generates a little income for him. "I hold my own," he adds. In the meantime, Homan has continued to develop the surrounding acreage, which is where there's money to be made.

The hurricanes of 2004 did not damage the structure, but the management did nail the windows permanently shut in the circular glass observatory at the top of the tower, and there's no air conditioning. It was hot as hell up there on a recent late afternoon, as the sun blazed from the west. Hard as it is to believe, they used to let people hang out over open windows.

Today, though, the view from up here highlights the repetitive angles of tract housing stretching to the horizon in every direction (except east, into Disney land). Here is a place to catch, in one panoramic view, the devouring development of our natural resources.

Nonetheless, the old charm is evident in the tower itself, in touches like the citrus-motif hand-painted elevator you walk through for the ride up, which still brings butterflies to the stomach. And Homan retains hope that some entrepreneurial spirit will come to him with an offer of turning the tower into a teahouse or something else that'll draw locals. "I'm open to ideas as to how to make it more viable," he challenges.

There's entertainment to be found any day of the year by jumping on State Road 50 – aka Colonial Drive – and heading east toward the coast to Titusville to watch the sun rise over the Atlantic Ocean. Of course some places over there are more picturesque than others; in particular, Playalinda Beach, tucked into the southern district of the Canaveral National Seashore (which extends north to New Smyrna Beach) near Titusville. To get to Playalinda, you have to drive through Merritt Island National Wildlife Refuge, which is home to 140,000 acres of marshes, dunes, oak, pine and palm trees and 500 species of wildlife – especially migratory birds – all owned by NASA.

Pristine beaches sit in the shadow of the launch pad at Cape Canaveral. Just pull into one of the parking lots at Playalinda and cross the dunes for a sight of Old Florida (sans the rocket launcher). Pull into Lot 13 – the last one – and you're in for an even more startling discovery: Everybody's naked.

Though prohibitive signs are everywhere – don't-take-your-clothes-off-or-we'll-arrest-you type of admonishments – there are kids, families, fishermen, couples of all sexes (and some weirdos, natch) enjoying nature au naturel. So while the official word is clearly "No nudity," the enforcement isn't quite so clear.

For more than 40 years or so, bare bathers from all over the world have congregated here. Occasionally, there will be officials checking up on things, but we hear that unless you get in their face or make an ass of yourself, they are likely to ignore the obvious.

We found our outing there to be cathartic with regard to frustrations over the current state of political affairs. It was a beautiful thing – showing where the sun don't shine on Bush and Cheney's seashore. 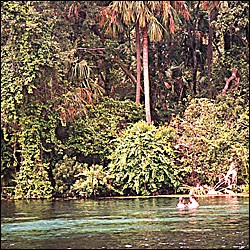 I've always thought of it as "The Bermuda Triangle" of Central Florida: the Ocala National Forest, a government-owned jewel in Marion and Lake counties – 383,573 acres worth – about a half-hour from Mount Dora. There are limitless hiding places within this reserve full of natural springs, hiking trails, campgrounds, canoeing, horseback riding, hunting, ATV trails and the rest of the stuff that makes the great outdoors so great.

No wonder the live-off-the-land, peace-loving Rainbow People set up camp here between January and May, before moving on to other national forests. (There may be enclaves that inhabit the forest year-round.) Running into the Rainbows could be disturbing, if you thought the days of the unwashed, patchouli-drenched hippies were over. Word is they trade sex and drugs for just about anything, so it never hurts to have something to barter with on hand, most importantly food and money.

Naturally, the Rainbows get a bad rap, but there are plenty of other questionable characters lurking about. There's no shortage of rednecks thriving in the small cities within the forest, unlike the black bears whose habitat has dwindled, threatening their survival. And there are frequent Orlando headlines about yet another missing body unearthed in the Ocala National Forest.

One discussion with a longtime Ocala forest fan revealed a rumor that there's a community of ex-POWs from World War II who've lived somewhere deep in the woods for decades.

Our favorite destination remains Alexander Springs, a natural spring suitable for snorkeling and scuba diving that pumps 80 million gallons of water per day into Alexander Springs Run, which flows east for about eight miles before joining the St. Johns River. The water is pure and cool – a constant and bracing 72 degrees – and the showers and other comforts at the park have been upgraded since last summer's hurricanes.

For those in the know, it comes as no surprise that gators are sitting on the opposite shore, waiting for sundown feeding time. It's always fun to watch impatient visitors from other parts of the world jump in the water at dusk, when they think they have the place all to themselves. Ha.

There's plenty to fear in these woods, and plenty of adventure.

Like the character played by Andie MacDowell in the 1989 film Sex, Lies, and Videotape, I worry about where the stuff we "throw away" really ends up. Well, in flat country like Florida, we make mountains out of it, and there's a scenic example at the relatively new Dean Road landfill.

Go as far south as you can go on Dean Road, which takes you to a nowhere zone just west of the Orlando airport and north of the Beeline Expressway (State Road 528). At the landfill's heavily traveled gateway, commercial trucks and personal cars are weighed on the way in, and weighed on the way out. You're charged according to how much poundage you lose in between. Then you start driving around the landfill site until they tell you where to go – signage is almost nonexistent – based on whatever dumping site is being worked that day and what kind of material you're tossing. On this day, two cat-piss-soaked mattresses of mine were to be permanently disappeared.

After driving up a steep, muddy, makeshift road, I was told to pull over and give the beds the heave-ho (it's a self-serve operation, so looking weak and out of your element won't elicit any help.) After dragging the mattresses through the mud, I chose their resting place among the day's other detritus. Both exhilarated and disturbed at the same time – I mean, who the hell would ever want to live anywhere around here? – I turned around and saw, from the pinnacle of this man-made heap, an apocalyptic view of Orlando's coal burning plant at Orlando Utilities Commission's nearby Stanton Energy Center. The three smoking stacks spewed emissions into the atmosphere while I buried my unwanted past in sweet Mother Earth. No schoolkid or Republican should miss a tour of this dark side of consumerism.