This pandemic year has presented those of us who cover local events with quite a dilemma. We know how dangerous it is to gather in groups, not just to yourself but to everyone around you. On the other hand, the small venues and businesses that make our city the vibrant place we love are suffering. And let's not forget, human contact is a very real need, and 100 percent abstinence has been proven time and again to be an unrealistic standard. (Looking at you, Volstead Act.)

Ultimately, Orlando Weekly is a newspaper, not a spiritual guide. This feature exists to tell you what's happening in your city, not what you should or shouldn't do with your own life. Our readers are adults who are able to make their own decisions, weigh the consequences, and accept them — as is our staff. Please assess your own risk, consult your own ethics, and make good choices.

THROUGH FEB. 28:
BACH FESTIVAL
We are in the midst of a very different Bach Festival on this, its 86th year. But the Bach Festival Society of Winter Park has put the work into safety considerations for both audience and performers. One big difference is the absence of the 170-member choir — there's no safe way to pull off that type of onstage gathering. But conductor John V. Sinclair and Festival organizers have instead put together a number of smaller ensembles and groupings of musicians to keep the quality high. Bach Festival performances are taking place outdoors at Winter Park's Central Park, in Knowles Memorial Chapel at Rollins College, and virtually for "Bach at Home" events. Highlights still to come this month include: "Big Band Bach: Back Again," an outdoor performance of Bach's work rearranged in the big-band style by Rollins professor Chuck Archard; and "MMM ... Mozart, Mendelssohn, and McCartney," presenting symphonic works by this trio of composers performed by the Bach Festival Orchestra. Prices and locations vary by performance. Bach Festival Society of Winter Park, bachfestivalflorida.org

THROUGH MARCH 26:
FRONT PORCH SERIES
The Plaza Live's Front Porch Series has been one of the city's most pandemic-responsive live music experiences. And thanks to the experienced local curatorship of Joanne Grant and Southern Fried Sunday's Jessica Pawli, its first salvo of dates this year are steadier, more robust and distinctly more studded with homegrown stars. Through March (as of this writing), the outdoor stage will showcase a strong, Orlando-centric procession that includes Kaleigh Baker & Someday Honey, Midnight Ramblers, Cat Ridgeway and the Tourists, Oak Hill Drifters, Jordan Foley and the Wheelhouse and Beth McKee and Her Funky Time Band. Food trucks make these "weekend warm-up" shows even better. Plaza Live, 425 N. Bumby Ave., $15-$80, plazaliveorlando.org

THROUGH MAY 21 (and possibly beyond):
FRONTYARD FESTIVAL
There's been considerable hustle over the last year by the city's live music venues to adapt to the times for safety and survival, but none have met the challenge with as much infrastructure and all-in commitment as the Dr. Phillips Center. By effectively turning itself inside out and becoming downtown's own semi-permanent festival grounds of private boxes, the venue resumed its live programming on a grand scale out in its urban plaza. The Frontyard Festival is going even bigger this spring with heavyweight headliners from Jason Isbell to Wynton Marsalis to Foreigner, all at a time when touring has ground to a halt. They've even extended their outdoors, socially distanced setup to host community events like the Live & Local Lunch matinee concerts, morning fitness class series Start Me Up and a very nicely priced Sunday Disney film series. Game-changing. Prices vary per performance. Dr. Phillips Center for the Performing Arts, 445 S. Magnolia Ave., drphillipscenter.org

SATURDAY-SUNDAY, FEB. 27-28:
MONSTER JAM
Grave Digger and his monster truck comrades like Zombie, Scooby-Doo! and Monster Energy (look it up, it's true!) are making their annual pilgrimage to Orlando's — pandemic? can't hear you over the roar of the engines — outdoors Camping World Stadium for two days of daredevil stunts and speed contests. (And, we're guessing, unlucky smaller cars being smashed to atoms.) With socially distanced and limited-capacity seating, required masking, contactless shopping, a limited capacity Pit Party and other precautions in place, this particular Jam is going to look and feel quite a bit different than in previous years, but rest assured the 12,000-pound Monster Jam trucks will still be getting up close and personal with one another. Camping World Stadium, 1 Citrus Bowl Place, $25-$80, monsterjam.com

THURSDAY, MARCH 4-SUNDAY, MARCH 14:
CENTRAL FLORIDA FAIR
The Central Florida Fair is celebrating its 109th anniversary with plenty of entertainment options like the Sea Lion Splash, Pirates of the Colombian Caribbean, racing pigs, camel rides, live music and helicopter rides (weather permitting). The fair has implemented new health and safety guidelines: Face masks will be required for attendees 6+ years of age when not actively drinking or eating; all inside events have been canceled this year; and all rides will receive a "deep cleaning" prior to opening, which will be repeated throughout the event. Central Florida Fairgrounds, 4603 W. Colonial Drive, $6-$100, centralfloridafair.com

SATURDAY, APRIL 3:
ORLANDO BOOK FESTIVAL
As has been the case with the great majority of its programming over the last year, the Orange County Library System is moving their Orlando Book festival into the virtual realm via Zoom in April. The festival will include writing panels, workshops and talks from bestselling authors from across the country, including an opening conversation between Angie Thomas, author of The Hate U Give, and Ayana Gray, the writer behind the Beasts of Prey trilogy. Orange County Library System, free, ocls.info 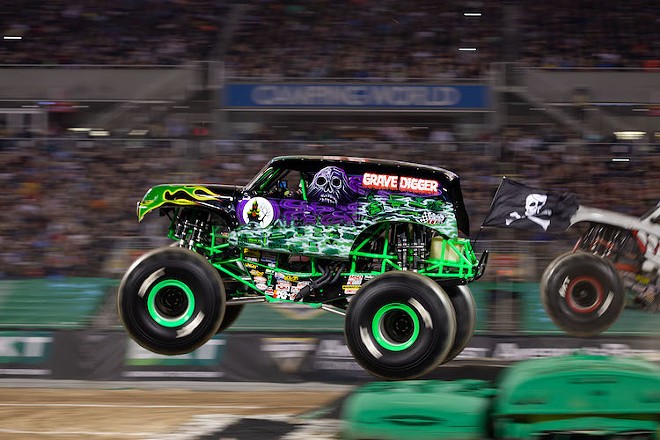 FRIDAY, APRIL 9-THURSDAY, APRIL 22:
FLORIDA FILM FESTIVAL
The Florida Film Festival returns to the Enzian Theater in Maitland this spring, with a mix of in-person and virtual screenings. From April 9-22, the Enzian — the sole hosting location for the fest once again this year — will screen a wealth of independent cinema from all around the world along with varied special events and panels, with options for online viewing as well. The Florida Film Festival was delayed last year, but managed to return in the summer. Against the odds, organizers pulled off a successful and safe event. Tickets go on sale for FFF 2021 on March 17. No films have been announced yet, but updates will be posted to the FFF's social media pages in March. Prices vary per screening. Enzian Theater, 1300 Orlando Ave., Maitland, floridafilmfestival.com

TUESDAY, APRIL 20-TUESDAY, MAY 4:
ORLANDO TACO WEEK
What's a better way to pregame for Cinco de Mayo than with 15 days of $5 taco specials from Orlando's favorite local taco joints and taquerias? And, yes, we know that this event is longer than 7 days, but who's complaining? Taco passports will be printed in an upcoming print issue of the Orlando Weekly to get stamped at participating locations. If you collect four stamps, you will be eligible for a grand prize drawing. Participating restaurants will be announced soon! So, keep your eyes peeled and your stomach primed for this takeout- and delivery-friendly happening. Orlando Taco Week, orlandotacoweek.com

FRIDAY, APRIL 30-SUNDAY, MAY 2:
SPOOKY EMPIRE
It looks like pop-culture conventions are coming back to Orlando — putting aside questions of whether the timing is right, a largely academic point here in Florida — with the return of this crowd-favorite Central Florida horror (and more) con. Over three days at the Wyndham Orlando Resort, attendees can check out vendors, panel discussions, movie screenings, intricate cosplay and more — not to mention celebrity guests like Corey Taylor from Slipknot, and a confirmed trio of solid acting talents right off the bat in Tom Sizemore, Richard Dreyfuss and Michael Biehn. More guest announcements TBA, no doubt. Wyndham Orlando Resort, 8001 International Drive, $40-$250, spookyempire.com

FRIDAY-SUNDAY, MAY 14-16:
WINTER PARK SIDEWALK ART FESTIVAL
The Winter Park Sidewalk Art Festival, one of the country's oldest juried arts shows, returns in-person and virtually for its 62nd year in May. The traditional outdoors event in Winter Park's beautiful Central Park showcases scores of artists from around the world, who work across media from clay to digital art, drawing, pastels, painting, metal, jewelry, wood and more. Just as exciting this year, though, is a virtual version of the fest, happening March 15-31, where you will have a chance to preview (and purchase) participating artists' work from the comfort of your own home. Central Park, North Park Avenue and West Morse Boulevard, Winter Park, free, wpsaf.org