Revamped Sushi House rolls will surprise the vinegar out of you 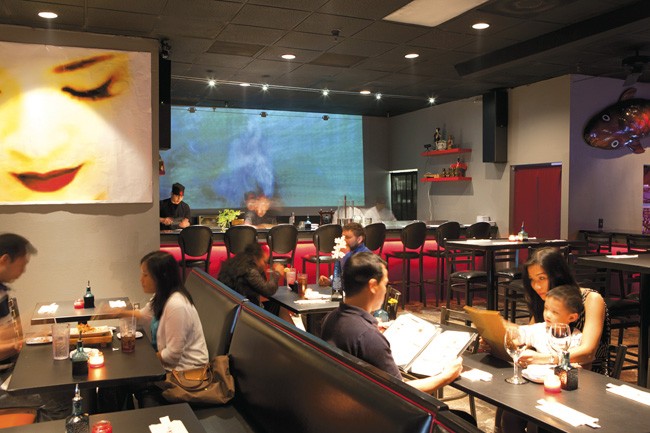 In a scene from The Revenge of the Pink Panther, a taken-for-dead Inspector Clouseau returns to his Paris flat only to find that his manservant, Cato, has turned the apartment into what the bumbling detective describes as a “Chinese nookie factory.” I imagine if the former tenants of 8204 Crystal Clear Lane were to enter through the scarlet door of Sushi House and behold the dusky room outfitted with mirrored walls, wispy red curtains and pleather banquettes, a comparable response would be heard. There's even a sizable photo of a woman with eyes cast downward in an affected, geisha-like pose – but as coy as that image may seem, it runs counter to the demeanor and sociable disposition of chef Dun Chau. His skilled blade has helped him establish a sushi domain in the southeast, with Fusion Bistro Sushi at CityWalk Orlando and another Sushi House in Atlanta, but it's his shari-making ability that warrants praise. Chau's sushi rice is superb – glistening, glutinous and well-formed – and helps accentuate rolls that, frankly, surprised the vinegar out of me.

I dined at Sushi House many years ago when it occupied a space on Florida Mall Avenue, and let's just say the meal was entirely forgettable. So when I found myself thoroughly enjoying Chau's “suicide roll” ($11), lumped with escolar and tilapia and crunched with Fuji apples, I knew I'd commit the meal to memory. Now don't expect Nobu-level sushi mastery, ingredients or atmo here – lounge music and projection screen theatrics aside, it's a down-to-earth affair at Sushi House, with a steady clientele of families, gym rats and after-work types walking in to enjoy a menu dominated by sashimi, nigiri and a host of rolls. We noted the freshness of hamachi fillets whetted with ponzu-unagi sauce in the yellowtail appetizer ($17). The kuki roll ($9) would ease any sushi novice's trepidation: Salmon and cream cheese topped with fish roe and wrapped with strips of cucumber made for an invigorating, if somewhat noisy, chomp, but the heavy cucumber flavor could help initiate those new to the sushi game. Same goes for the handsomely presented ninja beef sushi ($9), its seared strips of tataki laid atop sushi rice to give it a nigiri-style look. I asked for uni ($8) but was disappointed to learn they were out of that connoisseur's favorite, the sex glands of the sea urchin, so I got a protein shooter in the form of a raw quail egg ($2) and splurged on a couple of slices of toro sashimi ($10). Much to my chagrin, the toro was, in a word, awful. Bitter, not buttery, and with a half-frozen texture, it was quite possibly the worst piece of fish I've ever had. Gyoza chicken dumplings ($6) and multiple sips of piping-hot green tea ($2) helped neutralize the unpleasant aftertaste in my mouth, but it was a shame the meal had to end on such a sour note, and it only got worse. The banana flambé ($7) was as baffling and poorly conceived a dessert I've sampled. First off, the bananas are coated in tempura. Second, the fritters are then doused in vodka – not rum, or banana liqueur, but vodka! – and set ablaze, resulting in a singed crust and a bitter ending.

We stuck the proverbial fork in this one because it was more than done. But considering the overall positive experience, we saw dessert as a small sacrifice – just a burnt offering to the House of Sushi.