Allison Crutchfield doesn’t wanna have to describe her music 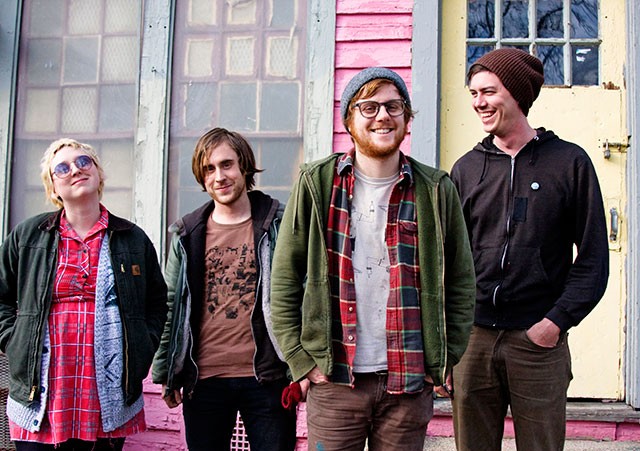 Yes, the music of Philadelphia and N.Y.C.-based quartet Swearin’ represents a perfect distillation of knotty ’90s indie rock and melodic punk. And yes, Allison Crutchfield, one of contemporary music’s most celebrated female rockers, fronts the band. But, in a phone interview with Orlando Weekly last week, these were the last two facts Crutchfield wanted to discuss.

“It can be really marginalizing to try and describe what you’re doing,” the otherwise genial and talkative Crutchfield says of the ’90s revival contextualizations thrown around willy-nilly in regards to Swearin’ and like-minded bands like Speedy Ortiz. “It’s dangerous territory – and it can also be embarrassing. Any time people ask me what kind of music we play, I feel goofy and silly trying to answer. So I just ask somebody else to describe it.”

As for her role as one of the leading ladies of feminist indie rock, which was solidified last week when Crutchfield wrote a response on Impose magazine’s website to a simplistic and objectifying Noisey article titled “How to Survive Being the Only Girl in a Band”? “It’s important to me to just be considered a musician in a rock band,” she asserts. “I don’t know if [women in rock] is necessarily a trend or just a progression of women being encouraged to play more at a younger age. It’s really exciting that that’s happening.”

It’s been happening for Crutchfield and her twin sister, Katie, both of whom grew up in Birmingham, Ala., for over a decade now: The two started in their basement as the Ackleys, progressed to proto-feminist indie rock with their landmark former band P.S. Eliot, and, after moving to Philadelphia and eventually New York, with Katie’s solo project Waxahatchee and Allison’s band Swearin’.

Although Swearin’s two albums, a self-titled 2012 debut and 2013’s follow-up, Surfin’ Strange, have both topped year-end best-of lists on the strength of their abrasive instrumentation and emotionally resonant songwriting, the band remains devoted to the DIY ethics that Crutchfield grew up on: all-ages venues, house parties, black-and-white cover art and a steady relationship with the same tiny record label, Salinas.

Crutchfield also emphasizes the band’s tight-knit bond. She and guitarist Kyle Gilbride were a couple when Swearin’ first started; bassist Keith Spencer was dating Allison’s sister, Katie. And where the first album focused on Crutchfield’s fiercely disenchanted voice and perspective, the second features nearly equal vocal and songwriting contributions from Gilbride and Spencer (along with a significantly stronger percussive foundation from drummer Jeff Bolt).

“Kyle and I weren’t super-close to Keith and Jeff when we started the band, but at the risk of sounding corny, we’re like a little family now,” Crutchfield laughs. “We love each other, love touring together and love playing, so we’ve become this tight, special unit.”

Yet everyone in the band thrives on his or her own. Gilbride, Spencer and Bolt are all active with other bands, both as supporting players and, in Gilbride’s case, as a producer and engineer. Crutchfield also played her first solo show “maybe ever” with punk legend Ted Leo on May 26. “The solo stuff is uncharted territory,” she says. “I’ve been writing songs that I plan to use on my own in the near future, but it will be very much just for me. We’re all the kind of people that have our own goals, and we try to stay focused on those.” (According to the band’s Facebook page, this current East Coast tour will be “our last for a while!”)

When asked whether she and her bandmates have grander goals for Swearin’ – a major record contract, bigger festival appearances, maybe even a star-making turn on late-night TV – Crutchfield demurs. “I don’t necessarily think that’s the road for Swearin’. We’re all pretty comfortable where we’re at – anything more would be a little intense. This band has evolved into something really special for us, but it’s also something we never expected. When we put the first record out, we had no idea people would hear it. It started as a bit of a whirlwind, so now we’re going for the slow burn kind of thing.”