Tableside showstoppers are the norm at Turkish steakhouse the H Cuisine

Theater of the beefy 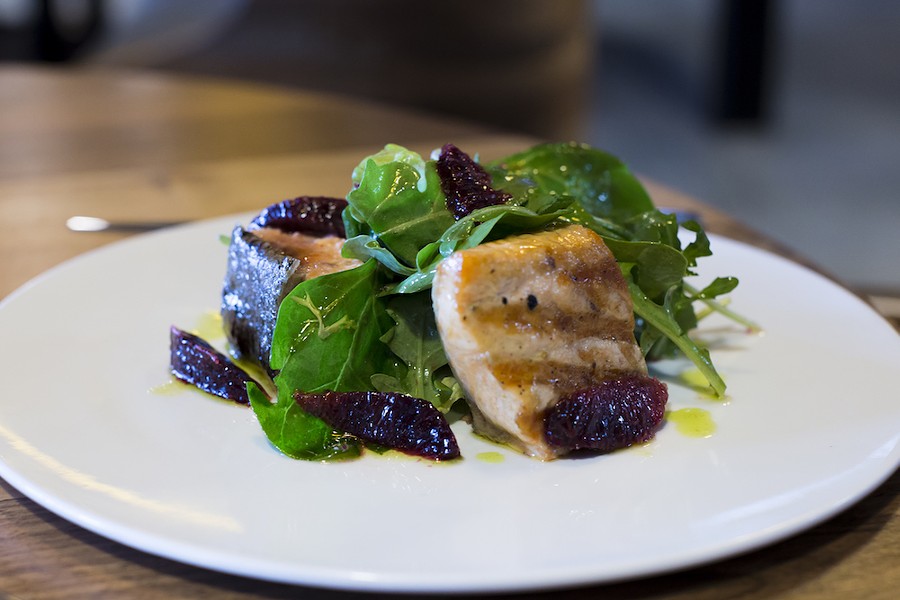 Nusret "Salt Bae" Gökçe, the man who showed the world how to properly sprinkle salt onto a slab of meat while looking like a proper douchebag, built an empire from his Nusr-Et chain of restaurants and, in so doing, popularized the Turkish steakhouse. Duran Özdemir, chef and general manager of the H Cuisine in Dr. Phillips, appears to be following in Bae's footsteps. H Cuisine, you see, is very much a sister restaurant to the Haci Steakhouse Özdemir runs in Kayseri, Turkey – right down to the servers donning vests and newsboy caps, and the modern, so-comfy-you'll-want-to-linger seating. Just as in that steakhouse in Turkey, eyes are inevitably drawn to a glass wall behind which glamorous slabs of beef pose amid illuminated bricks of Himalayan salt. From this dry-aging chamber, enticing cuts of USDA Prime beef beckon – cuts that are often sliced with dramatic flair tableside, then theatrically flecked with Maldon sea salt.

I felt a need to salt the 28-day, dry-aged, bone-in ribeye ($52) a little more myself. "Do it like that guy," said my dining comrade, and I knew perfectly well who he meant. So, with elbow cocked, wrist contorted and lips pursed, I managed to project salt all over my arm and the floor. "I guess it's harder than it looks," I muttered and performed a more staid sprinkle over the sliced meat.

The bites were every bit as beautiful as I'd hoped and while bulgur-like firik rice was offered as a complimentary side, mashed potatoes ($9) – à la Joël Robuchon – were my preferred carb. Medallions of lokum ($36) – that's tenderloin aged 25 days in butter – were supremely tender, yes, but I want my beef to taste like it came from the meatier bits of a cow, not its udders. Others would heartily disagree. Now, on this one visit, a starter of tulum salad ($13) with greens, goat cheese, walnuts and a pomegranate-studded vinaigrette came well after we got our steaks. Sure, the blunder was offset by the fact the salad was so damned good, but still. On another visit, the starters arrived in timely fashion and in accordance with restaurant protocol.

First, a steak tartare ($17) given a luscious makeover (tableside, of course!) with the addition of marrow scooped from the bone and mixed into the meaty mélange. It's served with a few slices of sourdough toast. Small quibble: Serve it with more sourdough toast. After ordering cacik ($10), a spicy yogurt-cucumber dip, we realized it didn't really go with anything. Nor was it served with any kind of bread. So we just spooned into it periodically like a wet snack before the "chateau filet" ($90) for two arrived. Cuts of the wet-aged tenderloin were seared ever so slightly in the restaurant's charcoal-fired Josper oven before being finished (tableside, of course!) in a butter-pooled hot plate. Özdemir, donning black gloves during the whole production, crowned the meat with bread prior to serving it. Simply glorious. Salt a little more generously, should you wish (you will), and spike it with crushed Aleppo pepper, should the urge strike (it will). Also, do your gallbladder a solid by NOT dipping any bread into that puddle of lustrous death.

For the steak-averse, strozzapreti ($32) provides enough gusto to go with the gimmick. The toothy pasta with oyster mushrooms, fresh basil and bits of corned beef – not pancetta – in a cream sauce is thrown into a hollowed Parmesan wheel set alight with a little rum. It's all tossed (tableside, of course!) in the rapidly melting cheese and then served. I loved it.

Intriguing desserts like milk pudding muhallebi with pomegranates and walnuts ($9) and a translucent candied pumpkin ($11) resembling Turkish delight – only drizzled with tahini and topped with cream and walnuts – elicited grunts of the good kind. Craft cocktails are given the serious treatment, and while the $35 corkage fee is a bit steep, markup on wines isn't as outrageous as other area restaurants.

Steaks, you'll notice, don't come cheap at H Cuisine, particularly when taking the small portion sizes into consideration. But I can say without reservation that the restaurant is worth its weight in salt, bae.