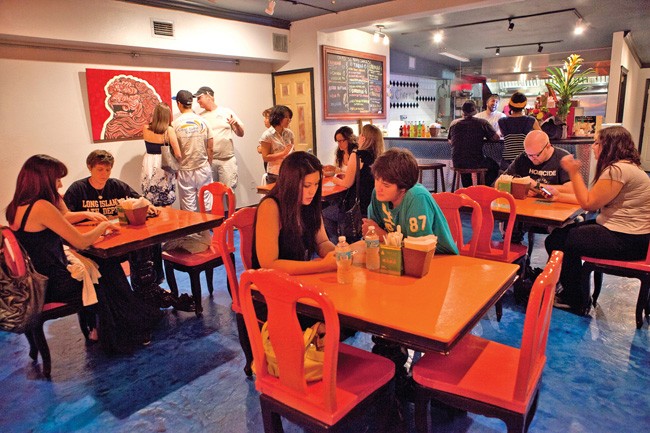 When a place describes itself as a cross between a food truck and a restaurant, as in the case of Pom Moongauklang and Edgardo Guzman’s Latin-Asian Tako Cheena, two things become clear: 1) the establishment is riding the coattails of a popular culinary trend, and 2) the possibility of contracting dysentery just went up.

Of course I kid about the latter, though I may have contracted a case of tinnitus after listening to the blaring ’80s rock and pop throughout my meal. “At this volume,” my dining partner bellowed, “my stomach wants to wear leg warmers.”

The taqueria’s koi-pond interior, with blue cement floors and tables and chairs spray-painted bright orange, isn’t as loud. It is appropriately folksy, and the fact they only accept cash here further lends to the boho air. We’re told they’re working on the credit card setup, so for the time being, just pretend it’s a food truck and pay cash – the prices here aren’t going to crimp your wallet anyway. For $1.75 each, the beef empanada sweetened with raisins and cinnamon and the succulent chicken empanada were as good, if not better, than any empanada we’ve tasted in town. The veggie version was like broccoli and cheese soup in a pocket, but the pastry seemed to have been baked rather than fried. Frequent dips into the habanero-jackfruit and ginger-guava salsas made them all the better – no surprise: Pom is the sauce queen.

We were looking forward to sampling TC’s signature tacos as much as those tantalizing sauces – tomatillo and kaffir lime (mild), sweet chili and smoked ghost pepper (hot), and roasted guajillo tomato paste and sriracha (hotter). Certain sauces pair better with certain tacos, but in the case of the panko-crusted cod ($3), no sauce was needed. It was, undoubtedly, our favorite of the four tacos we sampled. But that didn’t stop us from indulging in the pork belly ($2.50) in all its fatty, crunchy glory. The pork rind, unfortunately, was hard as a bone. The Korean beef ($2.50) could’ve done with more of a kimchi kick, and the Asian braised beef ($2.50) may have been overly hoisined, but both were gratifying. I’d like to see a single price for three tacos but that, along with offerings of shrimp, scallops and ahi tuna, is in the works.

The corpulent Indian butter chicken burrito ($7) was lacking in the most central ingredient – curry. Fragrant jasmine rice, potatoes and Mexican crema added body, but a stronger curry could give the burrito so much more punch. The African-inspired burrito with braised beef ($7) stuffed with organic quinoa, potatoes, bell peppers and corn supplied a wonderful blast of umami. (Minus the beef, it’s a popular choice for vegetarians.) We really looked forward to ending with the “Asian ginger apple fried spring roll” ($3), a mouthful of a moniker, but they were all out. What we got instead were some freshly fried (and complimentary!) churros served with a trio of sauces – Key lime condensed milk, caramel and chocolate. A delicious conciliatory gesture, to be sure.

As we prepared to head out into the rain, Pom’s business partner roared over the music about plans to expand the interior, create an outdoor space and have daily changing menus. Hey, in this part of town, it pays to be proud … even if it means saying it really loud.