In April 2017, Chinese President Xi Jinping visited Mar-a-Lago, President Donald Trump's Palm Beach, Florida, estate and club, for a two-day summit. While Xi and his delegation stayed at a nearby hotel, Trump and his advisers stayed at the peach-colored waterfront resort.

That evening, Trump and a dozen of his closest advisers hosted Xi and the Chinese delegation in an ornate dining room where they ate Dover sole and New York strip steak. Those sorts of lavish, formal gatherings are expected at a major bilateral summit.

But then there are less formal events. At some point later that evening, a group repaired to Mar-a-Lago's Library Bar, a wood-paneled study with a portrait of Trump in tennis whites (titled "The Visionary") hanging nearby. The group asked the bartender to leave the room so it "could speak confidentially," according to an email written by Mar-a-Lago's catering director, Brooke Watson.

The Secret Service guarded the door, according to the email. The bartender wasn't allowed to return. And members of the group began pouring themselves drinks. No one paid.

Six days later, on April 13, Mar-a-Lago created a bill for those drinks, tallying $838 worth of alcohol plus a 20% service charge. It covered 54 drinks (making for an average price of $18.62 each) of premium liquor: Chopin vodka, Patron and Don Julio Blanco tequilas, and Woodford Reserve bourbon. Watson's email did not specify how many people consumed the alcohol or who the participants were. (It stated that she was told the participants included then-strategist Steve Bannon and then-deputy chief of staff Joe Hagin. Bannon, who has said he stopped drinking years ago, said he didn't drink at Mar-a-Lago and didn't recall the episode. Hagin did not respond to requests for comment.)

The bill was sent to the State Department, which objected to covering it. It was then forwarded to the White House, which paid the tab.

The premium liquor costs are only the beginning of government spending at Mar-a-Lago that emerges in hundreds of pages of receipts and email correspondence between Trump Organization employees and staffers for the State Department, which oversees presidential diplomatic travel and works with the Secret Service and White House.

The emails show that the president's company refused to agree to what was essentially a bulk-purchase agreement with the federal government, and that it charged the maximum allowable federal rate for hotel rooms. The Trump Organization could be obstinate when it came to rates for, say, function rooms at Mar-a-Lago, a problem that was eased when the president signed a law lifting the maximum "micro-purchase" the government can make.

The emails have been released as part of an ongoing lawsuit between the nonprofit Property of the People, a Washington-based transparency group, and the federal government. Property of the People provided the emails and receipts to ProPublica. (The State Department is expected to release an additional 1,800 pages of records as part of the lawsuit, which was filed under the Freedom of Information Act.)

In response to questions from ProPublica, the State Department asked for and received the documents described in this article. State Department officials promised a detailed response, but then declined comment.

The documents reveal the intersection between Trump's conflicting interests. The emails show that "Mar-a-Lago wanted to have the government money without the government rules," said Charles Tiefer, a law professor at the University of Baltimore who served on the congressionally chartered Commission on Wartime Contracting in Iraq and Afghanistan.

A few months after Trump's inauguration, the State Department proposed a contract that would pay $200,000 for all room costs for federal employees who stay at Mar-a-Lago over the first term of his presidency. But Mar-a-Lago rejected the government's proposal. Instead, Trump's resort bills the government the maximum permitted by federal rules: 300% of the government's per diem rate, which works out to $546 per night.

Mar-a-Lago rejected the proposed flat-fee arrangement, according to the emails, because of concerns the club's lawyers had about the Federal Acquisition Regulation, or FAR, which governs federal purchases and is overseen by contracting officers. FAR seeks to promote competition and maintain "the public's trust."

The emails suggest the Trump Organization was worried that the lack of competitive bidding could run afoul of federal rules, among other concerns.

The State Department staffer wrote that Mar-a-Lago's "concerns are based on their general lack of knowledge on the applicability of the FAR regulations."

Mar-a-Lago and the Trump Organization did not respond to ProPublica's requests for comment. 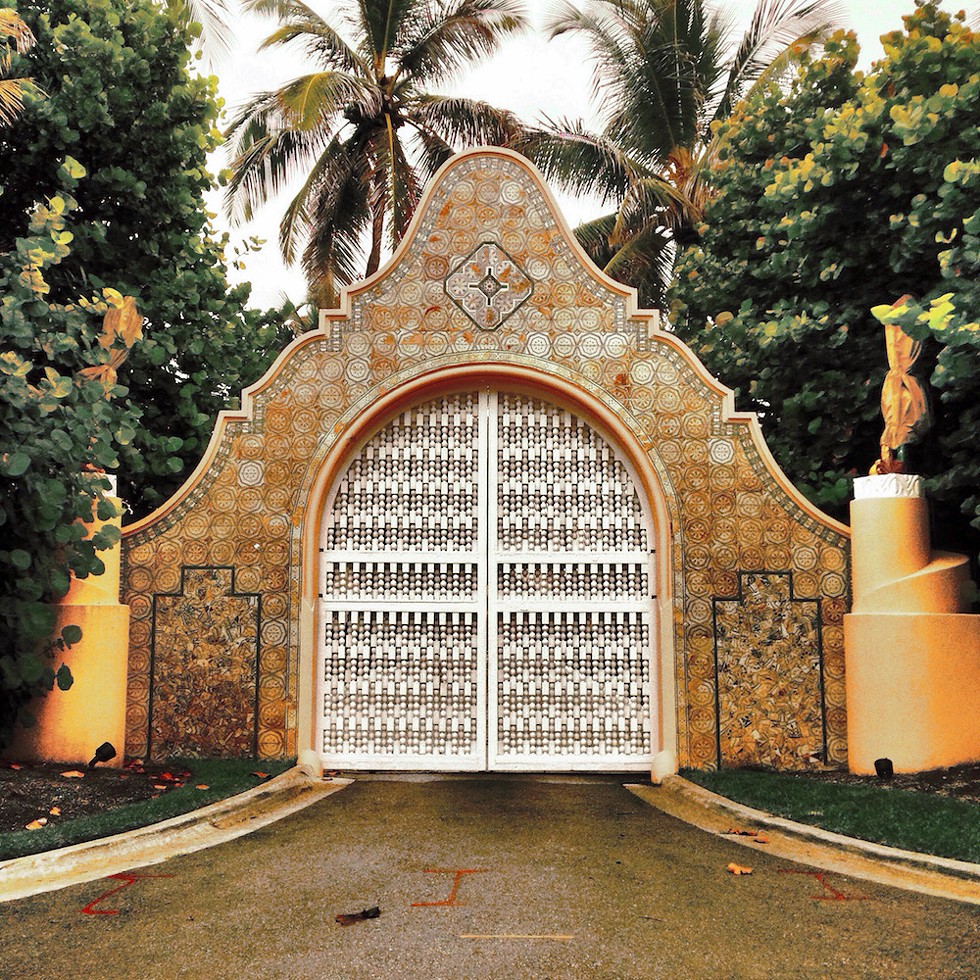 Since Mar-a-Lago wouldn't agree to a bulk contract, the State Department had to go to Plan B. When it came to the meeting with China's president, for example, the agency had to go into some contortions to make Mar-a-Lago's $546 nightly room rate square with its rules on competitive bidding, given that there are other less expensive hotels nearby.

At least 16 staffers stayed at the Hampton Inn in West Palm Beach; at least eight stayed at the nearby Hilton Garden Inn; and four others stayed at the Tideline Ocean Resort & Spa, where the press pool also stayed, according to a hotel manifest obtained through the FOIA lawsuit. The government-negotiated rates at those establishments ranged from $195 to $305 per night.

The State Department also broke with protocol regarding taxpayer-funded travel and applied for a Citibank travel card just for Mar-a-Lago visits.

– Mar-a-Lago can't process charges over $10,000, which led to problems when the club split bills and charged the government card for multiple transactions, emails show.

– Mar-a-Lago refused government requests to waive the costs of its "function room" for press and other official meetings in April 2017, leading to a near-violation of a $3,500 government spending cap. Last year, Trump signed a law that lifted that cap, known as the "micro-purchase threshold," from $3,500 to $10,000. The law does not appear to have been aimed at facilitating spending at Mar-a-Lago, but it allows the club to avoid additional government contracting rules when charging sums below $10,000.

– In one instance, after the government was charged more than $3,500 for conference space at Mar-a-Lago, it asked the Trump Organization for a 10% discount so that it wouldn't violate the micro-purchase threshold. Mar-a-Lago relented, but only after months of haggling.

In the emails, the director of presidential travel support, Michael Dobbs, frequently described the creation of a charge card unique to Mar-a-Lago as a "headache."

As Steve Schooner, a professor of government contracting law at George Washington University, put it, "The fact that we have a State Department contracting officer saying this is a headache is a reminder that, but for the relationship with President Trump, this would not be a contract the government would be having. That's a problem."

Many of the expenses incurred by White House staff are arranged and paid for by the White House's Office of Administration. These expenses are not required to be made public. The same goes for Secret Service spending to protect the president on such visits.

(The Government Accountability Office released a report last month evaluating spending at Mar-a-Lago in February and March 2017 and found that a total of $60,000 was spent at the hotel during four trips; the figure ran to $13.6 million when costs for plane travel, secret service, security and other logistics were included.)

The State Department payments, and its work on behalf of the White House and other traveling staff, are considered public records.

Between 2015 and June of 2018, at least $16.1 million has poured into Trump Organization-managed and branded hotels, golf courses and restaurants from his campaign, Republican organizations and government agencies. Because Trump's business empire is overseen by a trust of which he is the sole beneficiary, he profits from these hotel stays, banquet hall rentals and meals.

Federal spending rules don't specifically address agency-level spending on alcohol that is directly invoiced to the government, as occurred with the $1,000 bar tab at Mar-a-Lago. The State Department and the White House have had exemptions included in their appropriations legislation to allow for alcohol purchases.

Individual government employees are not permitted to use charge cards for "improper" purposes, such as alcohol, and federal per diem rules allow for charges for breakfast, lunch, dinner, and related tips and taxes, but specifically exclude alcoholic drinks.

Six government contracting experts said Mar-a-Lago may be violating rules requiring competitive bids. They argue that Mar-a-Lago's practice of invoicing meeting spaces, hotel stays and meals separately is a way to get around federal spending rules.

"Mar-a-Lago didn't want to compete, they wanted to sneak around the requirements, and charge much higher prices than the competition," said Tiefer, who served as deputy general counsel with the House of Representatives for 11 years. "It's not the first time in history that vendors have tried to get around the rules by charging individual components. This is familiar to every contracting officer. And it's wrong. It's not just a technicality. It's not a game. The only safeguard the public has against the Trumps swallowing up all the government business is at least minimal competition."

"It's one of the biggest fears coming true, that they are bending over backwards to help the Trump Organization," said Scott Amey, general counsel of the Project On Government Oversight. "I'm frustrated the State Department would exploit the system to bill Uncle Sam and the taxpayers. To have the government bicker to get a 10% discount shows the Trump Organization isn't putting the American public first. It's a worst-case scenario when it comes to conflicts of interest, with the president and his children putting themselves and profits ahead of the public."

This story was first published on ProPublica.com.