Tear gas is more dangerous than police admit, especially during the COVID-19 pandemic 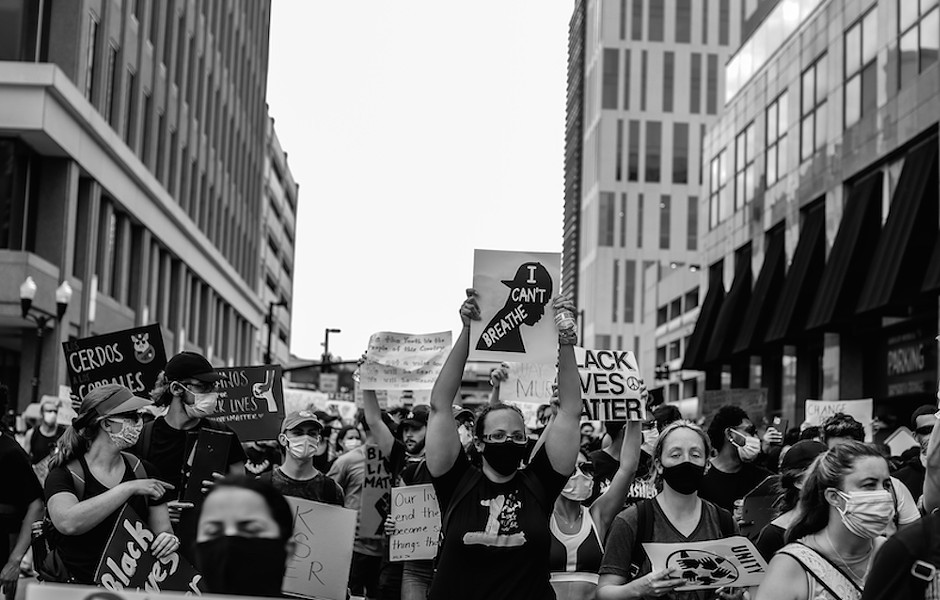 When Amira Chowdhury joined a protest in Philadelphia against police violence on Monday, she wore a mask to protect herself and others against the coronavirus. But when officers launched tear gas into the crowd, Chowdhury pulled off her mask as she gasped for air. "I couldn't breathe," she said. "I felt like I was choking to death."

Chowdhury was on a part of the Vine Street Expressway that ran underground. Everyone panicked as gas drifted into the dark, semi-enclosed space, she said. People stomped over her as they scrambled away. Bruised, she scaled a fence to escape. But the tear gas found her later that evening, inside her own house; as police unleashed it on protesters in her predominantly Black neighborhood in West Philadelphia, it seeped in.

"I can't even be in my own house without escaping the violence of the state," said Chowdhury, a rising senior at the University of Pennsylvania. On Wednesday, she said her throat still felt dry, like it was clogged with ash.

The Philadelphia protest was one of many instances in recent days in which police launched tear gas – a toxic substance that can cause lung damage – into crowds. In a statement, Police Commissioner Danielle Outlaw said that officers had no choice but to release it after protesters threw rocks at them and refused to disperse, and that officers also used nonchemical white smoke to minimize the amount of the irritant "while maintaining a deterrent visual effect." She called it "a means to safely [defuse] a volatile and dangerous situation."

But tear gas is not safe, according to a number of experts interviewed by ProPublica. It has been found to cause long-term health consequences and can hurt those who aren't the intended targets, including people inside their homes.

This would be enough of a problem in normal times, but now, experts say, the widespread, sometimes indiscriminate use of tear gas on American civilians in the midst of a respiratory pandemic threatens to worsen the coronavirus, along with racial disparities in its spread and who dies from it.

Panic can cause a stampede, forcing people into close proximity as they're expelling large droplets from their mouths. tweet this

"As an immunologist, it scares me," said Dr. Purvi Parikh, an allergy and immunology doctor at NYU Langone Health. "We just got through a brutal two months, and I'm really scared this will bring a second wave [of COVID-19] sooner."

It puts Black communities in an impossible situation, said Dr. Joseph Nwadiuko, an internist and researcher at the University of Pennsylvania Perelman School of Medicine. Thirteen of the 15 coronavirus patients in the intensive care unit where he works are Black, he said. "I worry that one of the compounding effects of structural racism is you'll see a second wave of Black patients, including those who were out there defending their lives."

On Tuesday, an open letter signed by nearly 1,300 medical and public health professionals urged the police to stop using "tear gas, smoke, or other respiratory irritants, which could increase risk for COVID-19 by making the respiratory tract more susceptible to infection, exacerbating existing inflammation, and inducing coughing."

Here's what you need to know about tear gas and how it's being used by law enforcement in recent days.

Tear gas can cause long-term harm by making people more susceptible to contracting influenza, pneumonia and other illnesses.

Tear gas is the generic term for a class of compounds that cause a burning sensation. Most law enforcement agencies in the U.S., including the Philadelphia Police Department this week, use a chemical called CS, short for 2-chlorobenzalmalononitrile.

CS activates a specific pain receptor, one that's also triggered by eating wasabi, said Sven-Eric Jordt, a professor of anesthesiology at Duke University. But CS is much more powerful, up to 100,000 times stronger than the sting from wasabi, he said. "They are really pain nerve gases. They are designed to induce pain."

CS is particularly painful when it gets on your skin or in your eyes. (Doctors have advised protesters not to wear contact lenses.) When inhaled, the pain induces people to cough. The compound degrades the mucus membranes in your eyes, nose, mouth and lungs – the layers of cells that help protect people from viruses and bacteria.

Scientists know little about how CS affects the general public. The most comprehensive studies were conducted by the U.S. military on thousands of recruits who were exposed to tear gas during training exercises. Afterward, it left them at higher risk for contracting influenza, pneumonia, bronchitis and other respiratory illnesses.

The soldiers were generally healthier than the average person, with fewer underlying conditions like asthma or heart disease. Studies of civilians in Turkey found that people who are repeatedly exposed to tear gas are more likely to have chronic bronchitis or chest pains and coughing that can last for weeks. It may also be linked to miscarriages.

The effects worsen as people are repeatedly exposed to higher doses, Jordt said, but it's hard to measure the concentrations of tear gas during chaotic protests, and many who are affected will be reluctant or afraid to seek medical help.

Parikh, the Langone Health doctor, is particularly worried about children at the protests. Their lungs and immune system are still developing, and tear gas could lead to neurological problems or permanent skin or eye damage if it's not washed off quickly.

According to the Centers for Disease Control and Prevention, severe tear gas poisoning, particularly if the gas was released in an enclosed space – can blind or kill people through chemical burns and respiratory failure. Prisoners with respiratory conditions have died after inhaling tear gas in poorly ventilated areas. On Wednesday, an inmate at the Metropolitan Detention Center in Brooklyn died after guards sprayed him with pepper spray, another kind of tear gas that causes similar health effects as CS.

In a statement, the U.S. Department of Justice's Bureau of Prisons said the inmate, Jamel Floyd, was caught "breaking the cell door window with a metal object" and "became increasingly disruptive and potentially harmful to himself and others." Medical staff "immediately responded to assess the inmate, found Mr. Floyd to be unresponsive, and instantly initiated life-saving measures." An investigation is underway.

Tear gas can increase the spread of the coronavirus and might make some people more vulnerable to catching it.

It's too early to know exactly how tear gas affects coronavirus patients. But Parikh said they both cause lung inflammation. "Anything that's an irritant can cause that same inflammatory response," she said. "Your lungs can fill with mucus and it can be very difficult to breathe. The muscles narrow; it's almost like breathing through a straw."

People with asthma and other respiratory illnesses already have higher baseline inflammation that makes them more susceptible to catching infections like the flu or the common cold, Parikh said, so tear gas could trigger an asthma attack or weaken the body's ability to stave off COVID-19.

"If your lungs are already wheezing and coughing, working hard to expel this tear gas or this irritant, it's unable to have that reserve to fight off any infection, whether a virus or bacteria," she said.

Talia Smith, a graduate student at the University of Nebraska, said it only took a whiff of tear gas to trigger an asthma attack when she was protesting in Omaha last Friday. She could barely feel it in her eyes, but her throat "just immediately started closing," she said. Smith had brought her inhaler, but the medication inside was running low. She'd only had one asthma attack in her life before this. Smith had a burning feeling in her chest for days afterward, and she went to get tested for the coronavirus; the results are pending. She worries that if she catches the virus while still feeling the effects of the gas, she'd be fighting off the disease while her lungs aren't at full capacity.

Parikh said there's not enough data on asthma and the coronavirus in general. While asthmatics are at higher risk for all respiratory infections, asthma isn't among the top chronic conditions for the most severe coronavirus patients. "We are still seeing many asthmatics get it," so it's too soon to say there's no risk at all, she said.

Tear gas weakens the demonstrators' protections against the coronavirus, said Dr. Abraar Karan, a physician at Harvard Medical School who's working on the coronavirus response. Infections increase when people cough or talk loudly, he said, and even if someone is wearing a mask, when they're hit with tear gas, they'll take off the mask as they're coughing. "Not only are you vigorously coughing, you're vigorously inhaling to try and get more air in."

Panic can cause a stampede, forcing people into close proximity as they're expelling large droplets from their mouths, he said, perfectly describing the situation that Chowdhury experienced on Monday.

Karan said he's worried that protests could turn into superspreading events, yet he also understands why people feel they must be there. "At the same time, I'm worried about my patients who've been destroyed by systemic racism. So racism is killing them as much as a pandemic is."

It will take at least another week before researchers can study whether the protests led to outbreaks. Even then, it will be hard to tell whether the infections were caused solely by the large gatherings or whether tear gas contributed to the increase.

Protesters aren't the only people at risk. Tear gas is entering homes and businesses.