For 140 years, the tiny Colorado town of Telluride has been shaping the future. Starting in the 1870s, it did so in gold, silver and copper. And in 1974, after the minerals were exhausted, the city turned to celluloid.

But the Telluride Film Festival, which I attended over Labor Day weekend, is not alone in molding film's future. Each September, moviemakers premiere their productions at the Toronto International Film Festival, the Venice Film Festival and countless smaller events. It's these fests – along with filmmakers who opt for the simpler method of a single, general release – that get cinephiles' blood pumping and Oscar odds-makers posturing. And rightfully so, as the fall is cinema's best season.

Judy was the opening-night highlight at Telluride, so that's where I begin this eclectic examination of some of the best and most notable upcoming films. And it's a fitting start, as the biopic of movie legend Judy Garland opens nationally this week.

Directed by Rupert Goold, the film focuses on the last year of Garland's life. But it also uses flashbacks to her early MGM days to paint a sad picture of an astonishingly talented but ultimately doomed performer. Renée Zellweger, as Garland, deserves praise for her mimicry, but it's awfully tough to capture a legend's soul. And considering the immense joy Garland brought to millions, the film is surprisingly joyless. Still, there's enough nuanced storytelling to hold one's interest, and Zellweger is likely to get an Oscar nomination for her physical and vocal transformation.

An even better female performance is found in another Telluride gem: Marriage Story (which has a tentative release date of Nov. 6). Scarlett Johansson plays a headstrong, career-minded wife going through a divorce from a character portrayed by Adam Driver. Together the actors conjure on-screen magic that is simultaneously hilarious and heartbreaking. Writer-director Noah Baumbach told us at Telluride, "It's the best thing I've ever been involved with."

It's also the best performance of Driver's career, and that's saying something considering the actor is everywhere these days. At Telluride alone, he was honored by Martin Scorsese and praised not just for Marriage Story but director Scott Burns' The Report (Nov. 15), about the CIA's illegal torture practices post-9/11.

But Driver is not an Oscar lock, as he has competition from yet another Telluride entry. The Two Popes (Nov. 27), starring Anthony Hopkins and Jonathan Pryce, was arguably the hottest ticket at the festival, as writer Anthony McCarten and director Fernando Meirelles have crafted a unique and surprisingly stylish meditation on spirituality. Portraying a mostly fictional meeting between Benedict (Hopkins) and Francis (Pryce), the film entertains and surprises with its boundless energy and intellectualism.

Just as enjoyable and similarly powered by two memorable performers (Matt Damon and Christian Bale) is Ford v Ferrari (Nov. 15), the tale of the 1960s rivalry between the two great automakers. The most visually impressive film ever made about racing, James Mangold's movie is that rare, almost Spielbergian combination of art and entertainment. 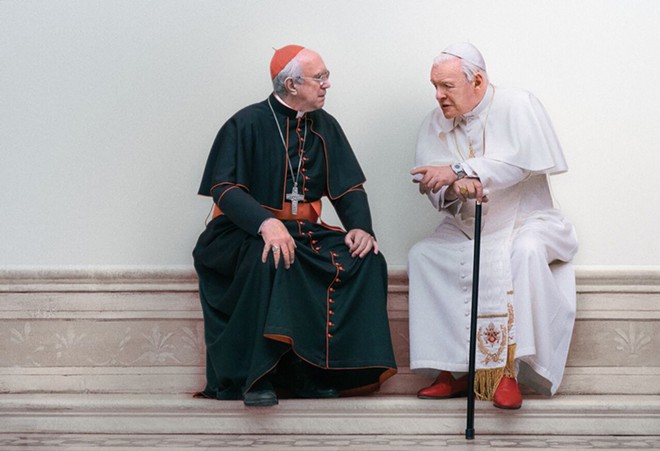 It probably won't grab Oscar nominations, but The Aeronauts (Dec. 6) is to the air what Ford v Ferrari is to the road. Directed by Tom Harper and featuring the undeniable chemistry of Felicity Jones and Eddie Redmayne as pioneering 19th-century balloonists, the film is one of the year's best family-friendly adventures.

It's impossible to see everything at a festival, so for the following films I rely solely on good buzz and high expectations. And not many upcoming flicks have more of that than Waves (Nov. 1) and Parasite (Oct. 11). A darling of both Telluride and Toronto, the former film, directed by Trey Edward Shults, is an emotional examination of family, love and masculinity. Parasite delivers punches too, but it does so as a satirical thriller. And apparently enough of those punches landed at Cannes for the festival to award writer-director Bong Joon-ho its top prize.

Waves is drawing comparisons to the work of Terrence Malick, but Telluride and Toronto both included a film by the visual master himself. A Hidden Life (Dec. 13) is rumored to mark a return to form for Malick's storytelling but also promises a meditation on spirituality.

Though this has been by no means an exhaustive study of fall film, I hope it points you in the right direction. And just like those 19th-century Telluride miners, perhaps you too will discover your own nugget of gold.

– This story is from the Sept. 25, 2019, print issue of Orlando Weekly. Stay on top of Central Florida news and views with our weekly Headlines newsletter.