Restaurant should shed the suit and tie, embrace the jersey and flip-flops 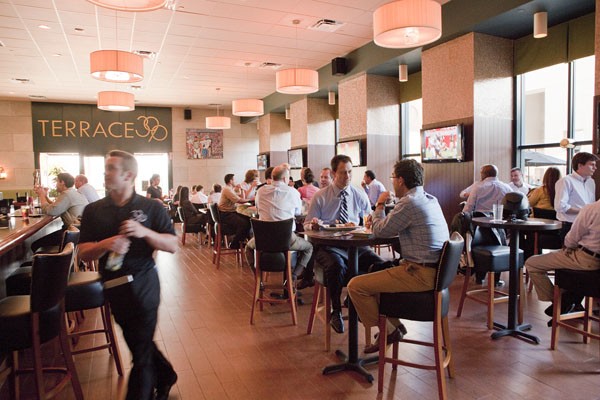 The hearts of many a gastronome shattered when the venerable Harvey’s Bistro served its last meal on Valentine’s Day 2009. The restaurant, after all, was a downtown mainstay occupying the ground floor of the Bank of America building for 15 years, and a popular draw for gourmand financiers and old-money Floridians out for a romantic night. So when word came that Terrace 390 would be moving into the old Harvey’s space, movers and shakers on Orange Avenue champed at their proverbial bits at the notion of once again dining on high-end cuisine in BoA’s urban setting.

The restaurant, owned and operated by a trio of recent University of Central Florida grads, retains the polish of Harvey’s power-scene motif, but UCF memorabilia, works of “art” (love the bikinied blonde standing next to a Ferrari) and numerous flat-screens airing ESPN and Fox News would fit in better at a frat house than a posh eatery. If restaurants were people, Terrace 390 would be the bastard offspring of William F. Buckley and Brandi Chastain, or Rupert Murdoch and Mary Lou Retton. There is a sprawling terrace for alfresco dining, but the wrought-iron tables amid the concrete plaza don’t exactly beckon diners. It all just seems a bit off – like seeing Bill Gates at Appliance Direct. And then there are the iPads that unfledged servers use to take orders and show diners photos of dishes – it’s all a bit gimmicky, but I suppose it beats paper and pen.

Executive chef Charles Walker plays it safe with a menu similar to one you’d find at a T.G.I. Friday’s, though the bland and sterile chicken wings ($6.95) – ordered hot – weren’t even worthy of being served at a gas station. The trio of mealy sesame-seared tuna tacos ($9.95) didn’t taste much better, and calamari fritto ($8.95) was neither noteworthy nor offensive. Like the UCF Knights’ 2004 football season, the start to our meal was a real letdown, and we held out very little hope for our mains. The 8-ounce filet mignon ($21.95) was a prime Montana cut and a steal for the price. Yes, I had to wait five minutes before a steak knife was brought to me, but much to my surprise, this was a perfectly cooked filet that I thoroughly enjoyed. The sides of truffle macaroni and cheese and overdone green beans, however, left much to be desired. Blackened grouper ($19.95) laced with a New Orleans sauce was also flawlessly rendered, though sides of sweet potato fries and seasonal vegetables were, once again, unremarkable.

With no in-house pastry chef, don’t expect desserts to wow. Both the Key lime tartelette ($5.95) and mango-guava-mascarpone cheesecake ($5.95) were about as inspiring as a Lou Dobbs rant. One cool thing: a “$5 Back Window Menu” is offered to pedestrians walking along the small alley behind the restaurant. Just knock on the window, order your pizza, sandwich, soup or salad, and pay (cash only).

Many lament the fact that Harvey’s Bistro couldn’t reach a lease agreement with BoA’s landlord, and given the space sat empty for more than two years, the owners of Terrace 390 probably got themselves a good deal. Good for them, though frankly, the space deserves better. Terrace 390 needs to shed the suit and tie, embrace the jersey and flip-flops, and move out to the University-Alafaya corridor. Short of that, the restaurant needs to be re-concepted, and for that, these UCF grads need a little more schooling.