We go to press knowing that much more information will be uncovered in the coming weeks. This is our reconstruction of the day of the attack on Orlando.

Marcus Godden was sipping drinks and mingling with his friends when he saw Omar Mateen standing about 15 feet away by the bar.

Mateen wasn't drinking or dancing. Quietly, he surveyed the roughly 300 people enjoying themselves during Latin Night last Sunday at the gay nightclub Pulse in Orlando. He stared at them intensely, but didn't try to make conversation, Godden says.

"Lord Jesus, I pray to God that this won't happen to me today," he remembers thinking. To his left and right, he heard people crying, praying for the chance to see another day. 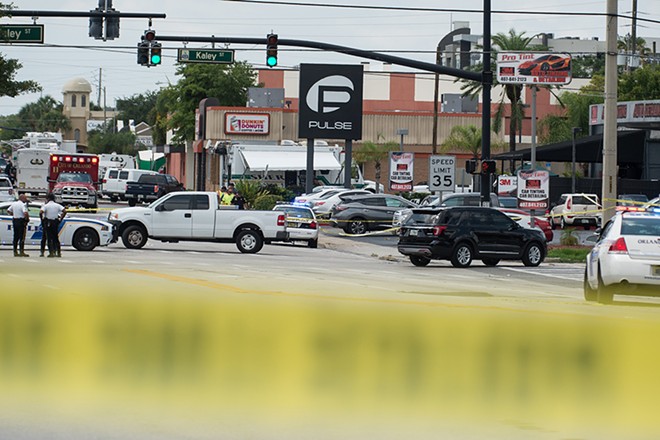 Godden says he heard the shooter leave the room and made a run for the back door, stepping on people before he finally made it to the patio door and used a silver table to jump the fence.

"Once I was over that wall, I ran to the 7-Eleven," he says. "I don't know whose car I jumped in, but I jumped in somebody's backseat and said 'Take me home.'"

An off-duty OPD officer working security for Pulse responded to shots fired at the club around 2 a.m. Sunday.

The officer started firing at 29-year-old Omar Mir Seddique Mateen, who was armed with a .223-caliber AR-15 type rifle, a 9mm handgun and extra ammunition. Two more officers joined in the gunfight, and Mateen fired back. Then, he walked deeper into the club and continued shooting, shutting people inside.

On its Facebook page, Pulse Orlando posted, "Everyone get out of pulse and keep running," as hundreds of law enforcement officials began surrounding the club. Mateen went into the bathroom, where four or five hostages were trapped. During this time, he made a call to 911 and swore his allegiance to ISIS. A larger group of people hid in a second bathroom. Orlando Police Chief John Mina says law enforcement officials contacted Mateen by phone to negotiate, and he sounded "cool and calm." He suggested to officers he might have an explosive device, like a bomb vest.

"He really wasn't asking for a whole lot," Mina says. "We were doing most of the asking."