Thanks to the Geek Easy, A Comic Shop reinvents itself as a coed lounge

Inside the newest hotspot for geeks and girls alike 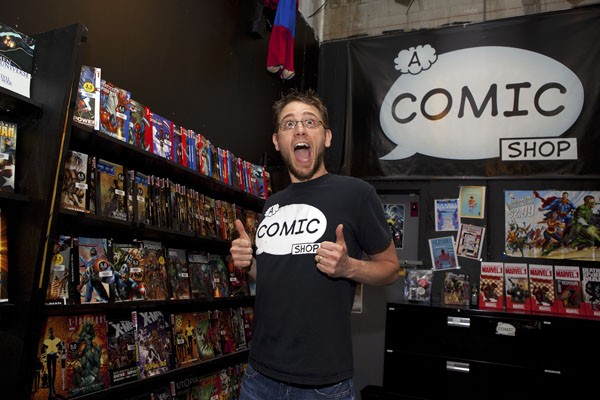 We've all seen the stereotype: The snobby, rotund loner Comic Book Guy on The Simpsons who has to wear prescription pants and has remnants of SweetTarts in his beard; the hyper-imaginative comic shop workers, the Frog Brothers in The Lost Boys, who read more books than they sell; even Kevin Smith, who grew up in the '80s and is the patron saint of fanboys, welcomes visitors to his online comic shop, Jay and Silent Bob's Secret Stash, with the pronouncement, "Finally - a geek-free comic book outlet! A place you can shop and not hang your head in shame!"

Face it: Comic shops still have an image problem. They're typically viewed as dark, dank havens for unkempt 40-year-old virgins, their owners not so much entrepreneurs as man-children trying desperately to avoid getting a real job.

Judging from the outside, Winter Park's longtime geek magnet, A Comic Shop, is no different. On a sweltering Saturday in February, two brave men wearing green-and-red superhero costumes stand in front of the building on Semoran Boulevard holding signs that read "Comics rock!" Inside, the long, narrow main room features intimidating towers of comic books and graphic novels lining the walls. The faces at the register are friendly enough, but for a newbie - a female newbie, at that - the feeling is akin to what one might feel walking through the Congressional film vault and asking, "So what's good?"

That's the feeling, though, that A Comic Shop and its co-owners, Jason Blanchard and Aaron Haaland, are trying to change. The store, which has won this paper's Best Of Orlando reader's poll for best comic book store for four consecutive years since it opened in 2006, has had moderate success and gained fairly widespread recognition thanks to its customer-friendly, non-commercial approach. But it wasn't until late last year, when Haaland and Blanchard discovered that the business adjacent to the shop was going under, that the possibilities for what the store could be were blown wide open.

"We're a small business, and I'd always say, ‘Don't support chain stores. Support small businesses. Big businesses just take all of your money,'" Haaland says. "But I started to feel like if I really wanted to champion small businesses, I should be doing things to support that. [Small businesses] should take more chances, be more authentic, more flexible, make themselves worthy of support." Haaland began toying with the "third place" concept, to make A Comic Shop a space to hang out between work and home, not just to shop in.

"We wanted to build a community for comic books," Haaland says. "I wanted to have a comic convention every day, a community where people that have shared interests can share those interests together."

So A Comic Shop introduced The Geek Easy, an expanded hang-out area in the space where the neighboring business once was, that serves as a safe room where comic lovers can let their fanboy flags fly freely. Inside, characters from the Mario Bros. video games are painted on the light blue walls. Open since fall 2010, the Geek Easy is a bring-your-own-beer lounge that hosts gamers, comic fans and movie lovers, and regular events like "Dungeons and Doritos" and "Geekgasms," "Comic Art Jams" and "Drink and Draw." One of its newest developments may be the one most antithetical to the comic-shop stereotype: the Fangirls club.

"We knew how many female customers we had," Blanchard says. "We see them. They come in all the time. But they almost never saw each other. They felt they were the only women that shopped here at the store. So I wanted to create a group where they could all find out that each other existed. The guys that have been here at the shop for a long time already come to the Geek Easy. We wanted to give women a place to come and meet."

Although the Fangirls club has only had a couple of meetups - discussion groups focused on titles like the feminist-minded Y: The Last Man and the bloody series The Walking Dead - the group, led by A Comic Shop interns Laura Borrelli, Jessica Tarnate and Megan Vermeer, has gone a long way toward proving that the long-ignored female fanbase is ready to come out of the closet.

It hasn't been an easy transition. For one thing, not all boys clean up so well: A warning from the Geek Easy to its inhabitants in January via Facebook railed against a visitor: "Some creep had a leaky anus in TWO of our chairs, and then asked underage girls for their phone number! It totally sucked, and everyone is traumatized … These are now bannable offenses!" For another, the workers, male and female, seem hesitant to call too much attention to the femme-fan courting, as if they're afraid of jinxing it.

"We were trying not to make the discussed comics just female books," Borrelli says. "We're trying to let them pick everything."

"[Female comic fans] don't know who we are out there," Tarnate says. "We don't know which girls like comics, and bringing us all together is allowing us to hang with each other. It's not like, ‘Oh, we're girls and we like comics. That's hot.'"

The fangirls, however, have fully embraced the new niche. Around 20 women - ranging in age from high school students to mothers - gather in the Geek Easy for the Walking Dead discussion group. Some have come from as far away as St. Petersburg. They start off with broad topics and eventually open up their personal experiences with the books. (One woman admits to a frighteningly real phobia of a zombie apocalypse.) An even larger group showed up in January for a talk on Y: The Last Man, in which a virus wipes out every man on earth except for one. That book's artist, Pia Guerra, a rare working female comic book artist who is careful to label herself as solely an artist and not particularly female-identified, stopped by the Geek Easy recently for a signing, an art class and an informal Q&A session, and she was delighted to see the fangirls development.

"[A Comic Shop] is being really smart by reaching out to women and learning what they want out of a comic shopping experience," Guerra says. "I guess I look at it like a women's-only gym. It's not about forcing out the boys, just creating a supportive environment where they don't have to feel defensive. Fanboys can be competitive with their knowledge and have an advantage with more years of experience, so that can be a turn-off when you're late to the game and just learning what geekdom has to offer."

But providing the geekdom experience doesn't come without a lot of hard work. In the shop's offices, a wide board hangs on the wall with a color-coded schedule filled out all the way through April, including visits from Marvel editor Lauren Sankovitch, DC writer Mark Waid and Image Comics' Joe Eisma and Nick Spencer. Comic Shop and Geek Easy workers communicate almost exclusively through Facebook and Twitter, which they update frequently. Blanchard, who also teaches at Full Sail University, makes sure there's never a dull moment.

"We have a Tuesday morning meeting every single week," Blanchard says. "Throughout the week, we're always brainstorming and coming up with stuff, but I'm more the logistics and implementation guy. I'm the one that always makes sure everything happens, but it's always a collaborative effort."

Just before the Fangirls concludes the Walking Dead discussion, the group votes on what the next meeting should cover. Borelli lists the choices, and when the option for The Pro is brought up, one girl can't contain her excitement and explains the plot: a former prostitute saves her children and then saves the world. (The vote is almost unanimous in favor of it.) After the discussion ends, Blanchard shyly peeks out of his office to invite the girls to hang out in the Geek Easy for the afternoon. A few girls flock to the video games and a few hang back. The Geek Easy hums with anticipation for the next event of the day: Ladies Night/Y: The Last Man Speed Dating. One girl shouts to Blanchard: "I wish you had these events when I was still single!" No one's in any hurry to leave.

"Many shops are run by fans and not businesspeople," Guerra says. "They don't get how the presentation, like a giant Lady Death poster in the window, or layout, like bad lighting or no kid's comic section, and the attitude of the staff are hurting their business. A Comic Shop is creating a welcoming space, not just for women but for anyone new to comics so they don't feel like a two-headed mutant when they walk in the door."

"Reading comic books is a very solitary act," Blanchard says. "You come in essentially by yourself, you read by yourself. So we're trying to create a place outside of that."