The 10 best new horror films to come out in October

Hooray for October, the wickedest of months.

Yes, it’s true that 2020 has thrust us all into a world that’s scarier in real life than any unstoppable killer from a classic 1980s slasher. Despite our strange new existence that’s fraught with more peril than inching through the dark to investigate a strange noise, we have to persevere. If you’re like me, then your safe harbor in the storm is cinema.

If you’ve yet to experience a movie by Justin Benson and Aaron Moorhead, Synchronic is the perfect gateway drug. If not for the COVID-19 pandemic, this likely would have been the breakout smash that finally introduced the world to Benson and Moorhead’s immeasurable film-making talents.

The film focuses on two New Orleans paramedics who must contend with a growing body count from a new designer drug. The kicker isn’t the drug, but what it can do, which is basically transport people of a certain age and medical condition to different moments in history, but only those moments that occurred wherever the user is when they take the pill.

Synchronic is a brilliant twist on time travel, an epic mindfuck of surreal imagery, and a beautiful meditation on mortality and friendship. Anthony Mackie and Jamie Dornan have never been better, but the real star here is Benson’s audacious script. A lot of movies promise to show you something you’ve never seen before. Synchronic actually delivers.

Bonus points for anyone so inspired that they go seek out Benson and Moorhead’s first three films (Resolution, Spring and The Endless) before watching their latest. The duo has talked openly about how each of their films is connected through a shared universe, and I suspect that Synchronic is no different. I cannot wait for a repeat viewing.

Chop Chop might just be one of the oddest, most ambitious debut feature films to come along in quite a while. For 75 minutes, writer-director Rony Patel crafts a gloriously gory take on the worst night a young couple could ever have. Seriously, I had no idea what to expect, but I definitely wasn’t prepared for Chop Chop to deftly stitch together a grab-bag of influences from teleporting mutant killers to torture porn and still keep me transfixed. Patel doesn’t stick the landing, sadly, but it’s difficult to fault him for taking a risk and trying one last twist in the final six minutes. Chop Chop deserves to be seen, and Patel is definitely a director to follow. I can’t wait to see what he does next.

Tomas (Alec Secareanu) is a former soldier living on the streets of London and wracked with guilt over his role in an unidentified war where he was tasked with guarding a check point. When he’s offered refuge by a nun, Sister Claire (Imelda Staunton), and a job as a caretaker at a dilapidated estate, Tomas sees an opportunity for redemption by helping Magda (Carla Juri), whose mother lays dying on the third floor of the massive house. Amulet, the first film from Romola Garai, takes its time getting to the spooky stuff, but it’s worth the wait. My main fault with Amulet is Garai’s decision to leave certain critical moments open to viewer interpretation, specifically where it concerns a strange totem that Tomas digs up during the war.

One of horror’s most entertaining genres, the anthology, has seen a massive uptick in both quality and quantity in the 13 years since the gold standard, Trick ’r Treat, debuted.

The Mortuary Collection stands shoulder-to-shoulder with the all-time greats. Writer-director Ryan Spindell’s gory bouquet truly has something for everyone, and Spindell thankfully sticks the landing by delivering a wrap-around story that’s just as good as the short segments contained therein.

Set in the town of Raven’s End, where newspaper headlines warn that the Boggy Bay Tooth Fairy remains on the loose, mortician Montgomery Dodd (Clancy Brown) regales a young job applicant, Sam (Caitlin Custer), with a flurry of dark wonders.

“As with all stories, it’s not the length of the tale, but the quality of content,” Dodd says, and boy howdy, he ain’t lying.

From a pretty pickpocket who discovers a portal to the Elder Gods, to a college freshman (Ema Horvath) looking to spread her seed, to the phantasmagorical mindfuck that awaits a caregiver who fails to ease his wife’s suffering, “The Mortuary Collection” is a ghoulish delight that commands your attention.

The Deeper You Dig
4 stars, 95 minutes, Blu-Ray and streaming

From the twisted minds of the Adams Family (writer-director John Adams, his wife, co-writer/director Toby Poser, and their daughter, actor Zelda Adams), The Deeper You Dig is a stark and surprising ghost story that creeps and claws its way under your skin and burrows deep into your subconscious.

Ivy (Poser) is a local spiritualist who makes her living reading tarot cards and channeling the departed spirits of loved ones missed by her elderly clientele. Ivy’s daughter, Echo (Zelda Adams), is a wise-beyond-her-years goth-girl teenager. And Kurt (John Adams) is new in town, a drifter who plans to renovate and flip a long-dilapidated property next door to Ivy’s home.

These three lives will intersect in ways both familiar and unexpected, but that’s not what makes The Deeper You Dig such a discovery. Adams and Poser approach each scene with imagination and ambition, using light and shadow to phenomenal effect. Their take on the overused "purgatory" trope is revelatory. And the bond between Poser and Zelda Adams, as real-life mother and daughter, radiates off the screen, infusing The Deeper You Dig with an urgency and aching sorrow that resonates and hits home. 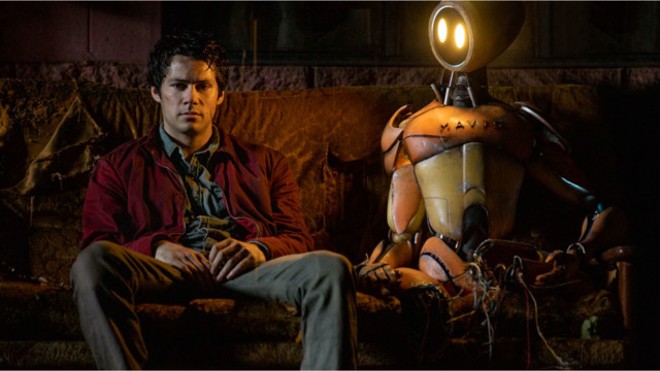 Nine years after breaking out in MTV’s Teen Wolf, and thankfully two years past the conclusion of his Maze Runner trilogy, Dylan O’Brien has been gifted with a new potential franchise, and it’s so much better than anyone likely expected. Love and Monsters imagines a world decimated by twin disasters. First, an extinction-level asteroid is blown up prior to impact. But the fallout from the bombs, which spreads across the globe, causes everyday creatures like cockroaches, ants, earthworms and centipedes to grow exponentially into massive monsters that lay waste to cities and kill most of humanity.

Joel (O’Brien) was just 17 when the world as he knew it ended, thick in the throes of first love with Aimee (Jessica Henwick), and excited for college. Now, seven years later, he lives in an underground bunker that’s constantly being attacked by giant critters. By chance, he reconnects via short-wave radio with Aimee, who is surviving 85 miles away on the northern California coast with another group. Love and Monsters is both a coming-of-age story and a robust survival thriller. The special effects, a healthy mix of practical and CGI, are solid. The cast, including Michael Rooker as a wise mentor, commits wholeheartedly. And just when it ends, you can’t wait to see more.

Bullets of Justice, the latest balls-out assault on cinema from writer-director Valeri Milev, is batshit crazy in the best possible way.

Maybe it’s the genetically mutated German pig soldiers who fly around on jet packs with little people strapped to their backs as tail gunners. Or the faux advertisements hawking "Grade A human meat" for sale to feed the pig army. Or the hero, Rob Justice (co-writer Timur Turisbekov), a former runway model turned wasteland assassin, who can’t help but have sex with everyone, including his mustached sister Raksha (Doroteya Toleva), also a vicious assassin. Or the perpetually naked and aroused uber villain/former catwalk king Rafael, the only man with a better ass than his, as Justice proclaims during a voiceover.

It could be that this Bulgarian import from Kazakhstan eschews all norms of conventional genre cinema. Or maybe it’s just the intoxicating way that Turisbekov and the other actors speak their dialogue as if it’s the first time they’ve ever uttered words.

If you loved Iron Sky, prepare to go gaga for Bullets of Justice, an instant cult classic.

Save Yourselves!
4 stars, 93 minutes, Blu-ray and streaming

Save Yourselves! is a hysterical riff on the first contact/alien invasion genre that places its extraterrestrial antagonists — which look like “tiny, furry footstools” according to Jack (John Reynolds) — firmly in the backseat. Jack and his girlfriend Su (Sunita Mani) are prototypical New York millennials. They spend their nights hardwired to electronic devices, whether a laptop or their phones, constantly checking emails and updating their status. When they decide to completely unplug for a week, and retreat to a friend’s remote cabin upstate, little do they know that cruel karma is about to send a blitzkrieg of space tribbles to ransack Earth. Save Yourselves! takes meta to a whole new level by shining a bright, uncomfortable light on our growing reliance and addiction to technology, but it also unspools a sweet love story and allows Jack and Su to discover a level of resourcefulness they never knew they possessed.

Kudos to writer-director Jud Cremata for taking a huge swing and a risk with his first feature film. This slow-burn thriller, shot in one continuous take, focuses almost entirely on the origin of fear, the way an idea can induce severe dread that slowly creeps up through your chest to form a tightening knot in your throat. The idea at the core of Let’s Scare Julie is an urban legend about a neighborhood recluse that a group of young women decide to exploit in order to spook their friend, Emma. Cremata, to his credit, is steadfast in his decision not to show what’s happening next door. The lack of jump scares and gore may turn off some hardcore horror fans, but for people who love seeing an artist play with expectations and upend the conventional YA horror template, Let’s Scare Julie is a perfect late-night-in-the-dark delight.

Fresh off a festival run, including the 2020 Fantasia International Film Festival, writer-director Thomas Robert Lee’s period thriller, The Curse of Audrey Earnshaw, is a dour rumination on the tragic consequences that accompany ignorance and fear. Fans enthralled by Robert Egger’s The Witch will find many similarities here. Both films use witchcraft as a means to explore the extreme beliefs of uneducated, close-minded communities. The Curse of Audrey Earnshaw lacks the visceral imagery, the chilling twists and the masterful storytelling that Eggers brought to play, but it still leaves an imprint.


John W. Allman has spent more than 25 years as a professional journalist and writer, but he’s loved movies his entire life. Good movies, awful movies, movies that are so gloriously bad you can’t help but champion them. Since 2009, he has cultivated a review column and now a website dedicated to the genre films that often get overlooked and interviews with cult cinema favorites like George A. Romero, Bruce Campbell and Dee Wallace. His reviews appear in our sister paper, Creative Loafing Tampa. Contact Allman at Blood Violence and Babes.com, on Facebook @BloodViolenceBabes or on Twitter @BVB_reviews.

Synchronic is not showing in any theaters in the area.