18 albums from 2015 we deem essential listening

How'd you make out mucking through the streaming world to discover music worth spinning? We had a pretty good year, despite how increasingly difficult it is to keep track of a music landscape that's more swamped than this state. Here is a bunch of music we'd recommend whole-heartedly. [Contributing writer Jason Ferguson adds this note: I'm only allowed seven entries for this year-end list, and I can't possibly say what the seven best records of 2015 were (maybe 70 ... possibly 17, but definitely not seven). Anyway, I can come up with a list of seven 2015 records that – even though they weren't reviewed in Pitchfork – are still definitely worth your time, because I loved them very much.]

Alan Watts – This Is It reissue
This “spontaneous musical happening” was recorded in 1962, at the height of the philosopher’s chemical-experimental phase and while it’s certainly of its sweaty, drum-circle-and-improvisations time, it is also – thanks to Watts’ undeniable intelligence and insight – nowhere near as meditative (or accessible) as his more well-known Om: The Sound of Hinduism LP from 1967. It’s also arguably a key foundation of the psychedelic movement that exploded in its aftermath. As usual, Numero Group is doing the Lord’s work with their reissues. – Jason Ferguson

Björk – Vulnicura
One of the world's most distinct voices, Björk bested herself on this special release that speaks louder than anything the emotionally decadent artist has put out – making listeners feel sane through shrewd stylistic excess and intriguing instrumentation. Have a cry because it's beautiful to feel futile. – Ashley Belanger

Cheatahs - Mythologies
My favorite contemporary shoegaze/noise-pop band released an album that is far less beholden to their influences than one would expect, but still somehow would not have sounded out of place in the '90s. Guitar-centric melodies, whisper-mumble vocals and a dense layer of noise-fog over the whole thing. Basically my musical erogenous zone. – JF

Death Grips – Jenny Death
While the provocateur role these art-rap guerrillas have played in the music landscape is pretty clear, their music hasn't always been. But this, the more realized half of the double album The Powers That B, is probably the most cogent, absorbing warhead deployed on the popular consciousness this year. It's a sonic bomb that embodies what they do best: total essence and maximum volume. – Bao Le-Huu

Golden Pelicans – Oldest Ride, Longest Line
You could choose to thrash around to absurd heart-stopping guitars or just sway recklessly on the knotted rope-swing that is singer Erik Grincewicz's tonsils, but either way you won't find a record that rocks harder than this without dusting off the most revered classic ragers. – AB

Joanna Newsom - Divers
The stunning return of Joanna Newsom went beyond in its subject matter to become worth diving into and it’s a solid reminder that she’s still the queen of rich imagery – a noble serious visionary who subverts sadness with delicate arrangements touched by pretty epiphany. – AB

Lightning Bolt – Fantasy Empire
More momentous than the fact that it's their first real album in six years is that this is their first album made in a hi-fi studio using real production technique. As not punk as that all sounds, it actually yields a wrecking ball of a record that finally approximates the seismic experience of one of the most electrifying live bands in modern history. It's a thrill ride that will melt your speakers. – BLH

Meatwound – Addio
The head-pulping live roar of these Tampa savages has triggered some early but ardent buzz in the heavy underground, and this debut album is a major-league brute. With metal fangs and hardcore knuckles, it mines some intriguingly intelligent ground but hits with maximum, head-on brunt. It's bloody, noisy hell from the most promising new heavy band out of Florida right now. – BLH

Shannon and the Clams – Gone by the Dawn
Finally something fun hit my ears in this outrageous offering from Oakland garage-punk standouts Shannon and the Clams, who seem to get badder and bolder each year thanks to the brainy vibes of sexpot singers Shannon Shaw and Cody Blanchard. "How Long" might as well be about the amount of time I spent with this on heavy repeat, giggling into my pillow. – AB

Shilpa Ray – Last Year's Savage
With the notable exception of Nick Cave (with whom she's toured and sung), too few are heralding this intriguing artist. This beguiling album is gypsy cabaret with punk nerve, a harmonium-fueled tempest of passion, whim and rare melodic acuity. Very few can balance being fiery, funny and cutting quite like this. Besides, how can you overlook someone who makes a song named "Johnny Thunders Fantasy Space Camp"? – BLH

Son Little – self-titled
Last year's Things I Forgot EP was a bright harbinger, but, with his full-length debut, this collaborator to stars like the Roots and RJD2 arrives as a prime-time talent in his own right. Although deeply rooted in the traditions of blues, soul and hip-hop, his sound is a modernization that's a brilliant furtherance, not a derivation, of them. It's authentic, contemporary and fully synthesized. – BLH 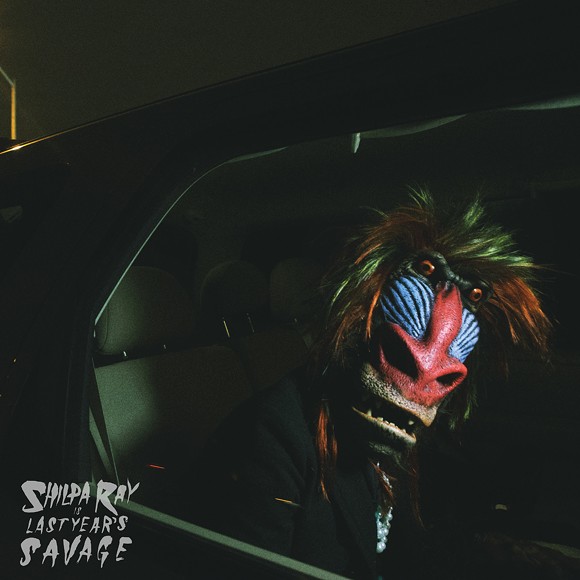 Stove – Is Stupider
Once in an interview, Lou Barlow told me only J. Mascis could write a Dinosaur Jr. song. I still think that's true, but damn if Stove doesn't feel like the best kind of déjà vu while upholding Ovlov frontman Steve Hartlett's signature. – AB

Superheaven - Ours Is Chrome
Dear fellow dad-rockers: If you can tear yourself away from your Hum and Failure reunions, you might want to turn your ears toward this excellent blend of grunge and space-rock that – I double-checked – came out this year. – JF

Turbo Fruits – No Control
It may not be their most punk album, but it's pumped with many of the most immediate and permanent songs Jonas Stein has ever penned. With a Strokes-like economy and incision, this sticky-sweet '70s-licked album shows not just an affinity but a real genius for guitar pop. And it's proof of a longer, broader future beyond punk. – BLH

Uli Jon Roth - Scorpions Revisited
In which the legendary guitarist – who left the Scorpions in the mid-'70s because he didn't like the commercial tack the band was taking – went into the studio last year and re-recorded two discs' worth of new versions of this iconic material that neither replaces nor improves upon the originals (because the originals are perfect), but refracts them through a slightly modern lens in a way that's somehow 99 percent less cynical than other, similar attempts by aging rockers. Roth's guitar playing is still a natural phenomenon. – JF

Visigoth - The Revenant King
Unapologetically backward-looking metal, from the fantastic, Frazetta-style Viking on the cover to a vocalist that sounds more like a coked-up Graham Bonnet, The Revenant King studiously (but not ironically!) evokes the mid-'80s golden age of power metal with nary a nod toward modernity. – JF

War on Women – self-titled
The last couple of years have witnessed a wonderful increase in riot grrrl nostalgia, as well as a not-so-wonderful increase in anti-woman bullshit, so the February debut LP from Boston's (depressingly) perfectly monikered War on Women brought a potent blast of feminist hardcore right when it was needed. While their 2012 EP was fiery and brutal, this full-length polishes the rougher edges, but doubles up on the intensity, nearly matching the ferocity of the band's shows. – JF

War on Women – self-titled
In music as in life, words, though powerful, can only go so far. But Baltimore’s War on Women are one of the few all-out revolution bands that pack the full sonic muscle to back up their unflinching stance. With core as hard as its feminism, this album is a bulldozer of force, clarity and politics. And its time is now. – BLH

Warren Michael Defever – Sunship
If you know me, you know I'm a fan of how Detroit-based Defever – best known as the leader of His Name Is Alive – is both willing and able to throw multiple types of musical esoterica into a wonderfully alchemical type of rock & roll. I like it even more when he focuses on one particular element, which, in this case, is meditation music powered by thick, drone-y analog synthesizers. – JF

Waxahatchee – Ivy Tripp
I wasn’t sure what it exactly took to create what I would deem a perfect record until I put on P.S. Eliot’s Katie Crutchfield’s debut as Waxahatchee. Apparently if you add two multi-instrumentalists, lyrics combating low self esteem, a distinctly lovely singer with range and restraint, then shake it up just enough till it’s at that lo-fi sweet spot, and my ears shun any other. – AB