Look for these rides, games and snacks to pop up at your favorite parks soon 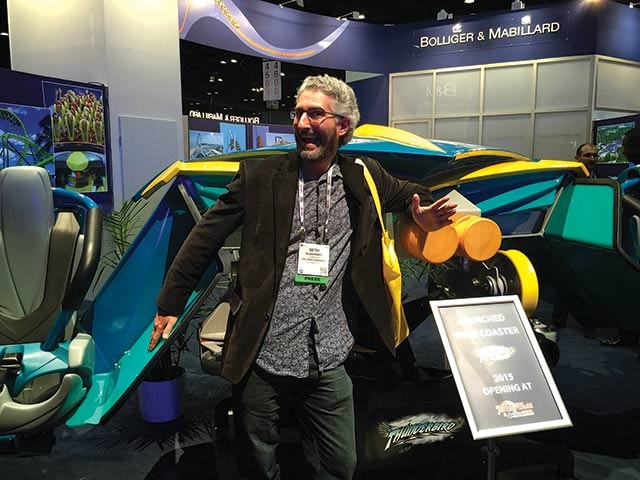 Beneath all the dreams, magic and pixie dust, the amusement industry is really just a numbers game, and if this year’s IAAPA stats are any indication, business is booming. This year’s recently concluded International Association of Amusement Parks and Attractions convention was the largest in 17 years, attracting more than 30,000 attendees to its 551,975 square feet of exhibit space and pumping an estimated $51.3 million into Orlando’s economy.

While there were few resort-sized projects revealed on the show floor this year (Mexico’s Gary Goddard-designed Cirque du Soleil theme park being a notable exception), a number of exciting upgrades were unveiled that may soon make their way into parks around town and around the world.

Roller coaster manufacturers rose to the occasion this year, displaying innovative ride vehicles like B&M’s launched wing rider, Thunderbird, for Holiday World; S&S’s free-spinning Batman for Six Flags Fiesta Texas; and Rocky Mountain Construction’s Twisted Colossus, a hybrid steel-and-wood reimagining of the classic coaster featured in National Lampoon’s Vacation. But nothing made a bigger impact than the newly released POV rendering of Skyscraper, the “world’s tallest roller coaster” announced for I-Drive in 2017; I lost count of how many heart-stopping inversions there are in the nearly four-minute ride. It will have “world’s tallest” competition in the form of a 420-foot-tall StarFlyer swing ride being installed next door to Merlin’s 425-foot Orlando Eye observation wheel, which opens next spring.

Back on solid ground, the convention’s big news was the resurgence of dark rides. After years of relying on somewhat schlocky simulators for family-friendly thrills, regional parks are now building ambitious interactive indoor adventures of the type you used to only see at Disney and Universal. Sally Corporation and Oceaneering stole the show with the Joker animatronic and ride vehicle for the Justice League: Battle for Metropolis 4D shooting ride, which will be built in Six Flags Over Texas and St. Louis. Triotech took second place with Voyage to the Iron Reef, a 3-D game-slash-ride destined for Knott’s Berry Farm that combines references to the park’s extinct attractions with steampunk shellfish.

Combining the two disciplines, Dynamic Attraction’s SFXcoaster promises a mind-blowing mix of roller coaster and dark ride that could put Gringotts to shame; shame it’s being built so far away in Abu Dhabi’s Ferrari World.

The most important ride unveiling I witnessed at IAAPA wasn’t high-tech, but it was highly touching. Zamperla presented a special fully accessible version of their Magic Bike Ride spinner to Give Kids the World, the Kissimmee camp for ill children and their families. The attraction will be named “Lori’s Magical Flight” after a former guest who passed away recently, and will be installed between Amberville and Julie’s Safari Theater.

Arcades may be making a comeback (if the new game rooms at Fashion Square’s Hershey bowling alley and Universal’s Cabana Bay hotel are any indication) and Bandai Namco’s Star Wars: Battle Pods is leading the way. Gamers have relived the Death Star trench run before, as far back as Atari’s 1983 wireframe coin-op, but never before in a mini-IMAX dome that completely envelops your vision for virtual reality-style immersion. Curved screens were a common theme at IAAPA 2014, with everything from dinosaur shooting galleries to demolition derby simulators sporting semi-circular visuals.

Another trend in arcade screens is duplicating the one in your pocket. Joining Jetpack Joyride, Fruit Ninja and Temple Run are super-sized smartphone apps Subway Surfers, Candy Crush and Flappy Bird (both official and cloned). For an experience you can’t get on your iDevice, Ocean’s water-gun games, ICE’s exhausting Kung Fu Panda Dojo Mojo and Imply’s Flintstones Yabba Dabba Doo! Bowling provide a more tactile type of entertainment.

I didn’t find as many attractive new treats to taste as I have at past IAAPAs, which was unfortunate since I missed lunch while walking the convention aisles for over five hours straight. There was the usual assortment of pizzas (with long lines that far outstripped the value of the food offered), mini donuts, and pretzel nuggets cooked in “oil-less fryers.” The buzziest snack was the Honolulu Hot Dog (a pineapple-bacon sausage drenched in a multitude of relishes), but I never got my hands on one. Another treat I didn’t dare taste was a new style of cylindrical cake cone into which soft serve was injected, like filling a sausage casing. The long line of people waiting to try it testified that there may be a market, but I’d prefer not to eat my ice cream out of a shed snakeskin. But my favorite IAAPA edible experience came at the prominent Coca-Cola booth, where I stopped for a free cup of Freestyle (vanilla root beer FTW) just as the Coke polar bear emerged. Hugging a CGI commercial icon in the 7-foot-tall flesh (or faux fur)? Now that’s magic.