The 37 members of the Florida Constitution Revision Commission 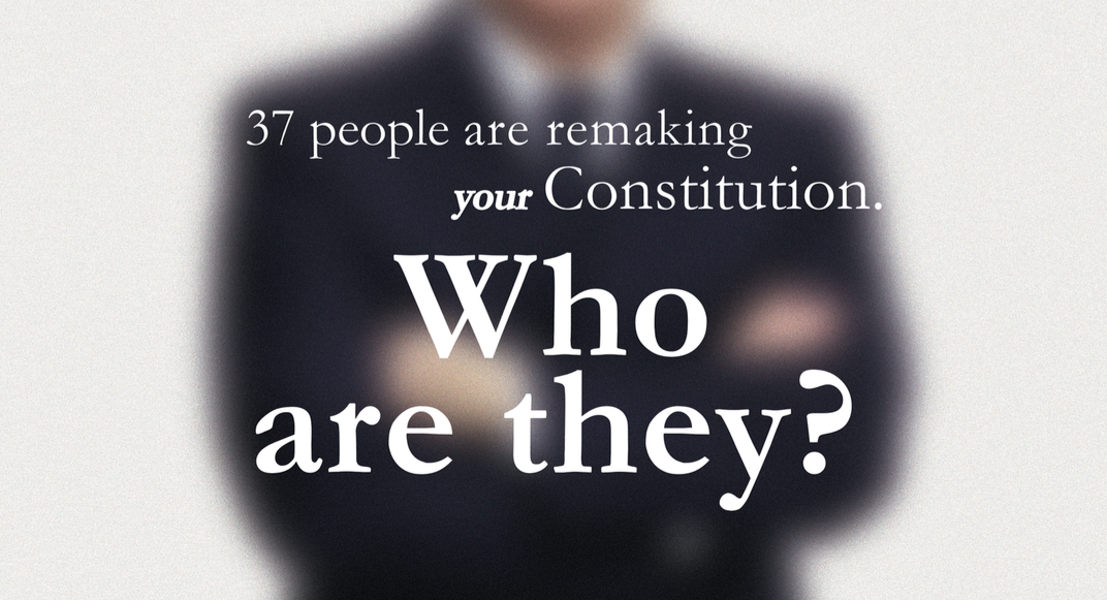 Know who's overseeing your laws: Here are brief bios of the 37 appointed members of the CRC.

Bio: A Republican businessman who has worked at the nexus of business and government through most of his career, Beruff was appointed to chair the CRC with little experience in politics, besides a wildly unsuccessful run for the U.S. Senate in 2016. Beruff is notorious for comments such as when he opened his sole political campaign by announcing he doesn't "think it's safe to allow anybody from the Middle East into this country" and calling former president Barack Obama an "animal," followed by a refusal to apologize. Beruff has not yet filed a proposal.

Bio: A physician and healthcare executive, Armas serves as the chairman of one of the leading healthcare groups in the Southeastern U.S. Armas has not yet filed any proposals.

Bio: A former elected Republican member of the Florida House of Representatives and the Florida State Senate, Carlton has introduced several proposals, including one that would establish a general prohibition on the use of e-cigarettes in the workplace.

Occupation: Co-owner and manager of Mabry Carlton Ranch, a cattle and citrus business

Bio: A regulatory and healthcare attorney based in Tallahassee, Cerio was recently appointed to the Florida Board of Governors by Scott. Cerio has filed several proposals, including one that seeks to limit the right to know what happened when a loved one suffers due to a medical mistake.

Bio: Before returning to the attorney general's office, Gainey was appointed by Scott to serve as sheriff of Marion County. Gainey has introduced a proposal that would establish rights to certain death benefits to the survivors of specified first responders and military members.

Bio: Often regarded as a campaign finance expert, Heuchan is the founder of a leading political intelligence, data analytics and fundraising company. Heuchan has filed several proposals, including one that would require that all meetings of the Legislature, the judicial branch and any commission or task force is to be conducted openly to the public.

Bio: Described as an accomplished member of Florida's business community, Johnson most recently served as the chair of the Florida State Board of Education. Johnson has filed several proposals, including one that would clear the way for public funding of private schools.

Bio: Jordan works for a nonprofit organization that supports education, health, youth services and the arts. Among other proposals, Jordan has filed a joint proposal that would revise and establish additional rights of victims of crime.

Bio: Known as an authority on insurance regulatory and compliance issues, among other proposals, Jordan has filed a joint proposal that would revise and establish additional rights for victims of crime.

Bio: Keiser has been in her current position for more than 30 years. Among a number of proposals, she has filed one that seeks to establish the Office of Domestic Security and Counter-Terrorism within the Department of Law Enforcement.

Bio: An accomplished Orlando-based attorney and chairman of the Greater Orlando Aviation Authority, Kruppenbacher has filed a proposal that seeks to remove authority for the election of circuit judges and county court judges and to make such judicial offices subject to merit retention.

Occupation: Attorney in the public sector

Bio: As well as having served on numerous boards, Lester has been an ordained minister in the Presbyterian Church for 34 years. He has not filed any proposals.

Bio: A former Republican member of the House of Representatives, Grady works in asset management and real estate development, construction, brokerage and finance. Grady has currently not filed any proposals.

Bio: Stewart has served nearly 40 years in the education field, starting as a schoolteacher and moving on to the administrative levels. Stewart has not yet filed any proposals.

Bio: Washington is a Miami-based consultant who advocates for evidence-based policies that increase college completion and student success. Among several proposals, she has filed one that would establish the minimum vote threshold required to be met by the board of trustees of a state university and the Board of Governors of the State University System in order to implement any tuition or fee increase.

Bio: Gamez's experience as a litigation attorney consists of representing both publicly traded and closely held corporations, financial institutions, domestic and international businesses, developers and individuals. Gamez has filed a joint proposal that seeks to automatically restore the civil rights of certain convicted felons upon completion of their sentence.

Bio: Gaetz completed a decade as a Republican state senator for Florida in 2016, including two years as president of the Florida Senate. His son is Rep. Matt Gaetz, R-Fort Walton. Among many proposals, Gaetz filed one that seeks to create a new section in Article XII of the State Constitution to provide for the election of the Secretary of State, establish the secretary's duties and include the secretary as a member of the Cabinet.

Bio: Levesque serves on the board of the Policy Innovators in Education-Network and the Florida Charter School Alliance. Levesque has filed a proposal that seeks to revise requirements relating to class size limitations in public schools and to require that any funds not expended toward the maintenance of average class sizes be used to increase teacher pay to the national average.

Bio: A political scientist who has dedicated her life to community action and public policy, Plymale has filed a proposal that seeks to establish a governance structure for the State College System.

Bio: Most recently Schifino completed his term as the president of the Florida Bar for the 2016-2017 year. Among other proposals, Schifino has filed one that would require a person to have at least 10 years of membership in the Florida Bar in order to be able to serve in a judicial office.

Occupation: Attorney with a focus on business litigation

Bio: In Smith's third term as an elected member, he was elected Democratic Leader of the Florida House of Representatives. Smith has filed a proposal that seeks to restore voting rights of certain felons upon completion of their sentence.

Bio: Solari has served on the City of Vero Beach City Council and is now a Commissioner for Indian River County. Solari has filed a joint proposal that seeks to remove the prohibition against using public revenues in aid of any church, sect or religious denomination or any sectarian institution.

Bio: A former high school German and English teacher, Thurlow-Lippisch now works for her family-run real estate company. Thurlow-Lippisch has filed a proposal that seeks to establish that every person has a right to a clean and healthful environment.

Bio: Timmann has served in all three branches of state government, including as a special assistant to Florida's first two Solicitor Generals. Timmann has filed a proposal that seeks to require, rather than authorize, the Legislature to provide for the Department of Veterans Affairs and prescribe its duties by general law, and to specify that the head of the department is the governor and cabinet.

Occupation: Martin County Clerk of the Circuit Court and Comptroller

Bio: A Republican member of the Florida House since 2010, Diaz has filed a proposal that seeks to require a candidate for the Legislature to reside in the district from which the candidate seeks election upon qualifying except at the election next following a reappointment.

Occupation: Member of the Florida House of Representatives

Bio: Donalds currently serves on the Collier County School Board. Donalds has filed a proposal that seeks to establish the inalienable right of all persons to pursue an honest trade, vocation, occupation or career.

Bio: Lee has been an elected member of the Florida Senate since 1996, and has served in a number of roles since then. Lee has filed a proposal that seeks to prohibit wagering on greyhound or other dog races on or after a specified date.

Bio: Newsome represents individuals and families in complex civil litigation. Newsome has filed a proposal that seeks to establish certain rights available to all electricity customers in Florida.

Bio: Nocco was former deputy chief of staff for then-Speaker of the Florida House Marco Rubio. Nocco has filed a joint proposal that seeks to prohibit the use of vapor-generating e-cigarettes in enclosed indoor workplaces.

Bio: Elected to the Florida House in 2010, Nuñez has filed a proposal that seeks to require that a certain percentage of funds from the proceeds of the tobacco settlement entered into with the state be dedicated to the research and treatment of cancer.

Occupation: Republican member of the Florida House of Representatives

Bio: Rouson was the first African-American prosecutor in Pinellas County and was elected to the Florida Senate in 2016. Rouson has filed a proposal that seeks to specify which convicted felons are subject to the automatic suspension of civil rights and to provide that any convicted felon may not vote or hold office until certain conditions are met.

Bio: As a re-elected member of the Florida House, Sprowls has been selected to serve as the Chairman of the House Judiciary Committee, among other posts. Sprowls has filed a proposal that seeks to prohibit certain special districts from levying ad valorem taxes after Jan. 7, 2029, or 10 years after the date of voter approval for such authority.

Occupation: Republican member of the Florida House of Representatives

Bio: President of the Florida Family Policy Council and a trial attorney who has litigated civil and constitutional cases, Stemberger has filed a proposal that seeks to specify that a person has the right of privacy from governmental intrusion into the person's private life with respect to the privacy of information and the disclosure thereof. Stemberger was most recently in the news when the FFPC issued statements in support of the transgender bathroom ban and calling for an end to "bullying" of Gov. Scott when activists pressed Scott on his promise to sign an anti-discrimination order for LGBTQ state employees.

Commissioners appointed by the Chief Justice of the Florida Supreme Court:

Bio: Coxe is a Jacksonville-based attorney who specializes in federal and state criminal matters. Cox has filed a proposal that seeks to require circuit court review before a state attorney may pursue prosecution of a child as an adult in criminal court.

Bio: A former Democratic member of the Florida Senate, Joyner was selected to serve as a Whip and Minority Leader Pro Tempore in the Senate Democratic Caucus. Joyner has not currently filed any proposals.

Bio: A former U.S. Attorney for the Southern District of Florida, Martinez has filed a proposal that seeks to remove a provision authorizing laws that regulate and prohibit the ownership, inheritance, disposition and possession of real property by "aliens ineligible for citizenship."

Bio: Florida's attorney general since 2010, Bondi has not currently filed any proposals.